F1 always goes 'back and forth' - Bernd Schneider 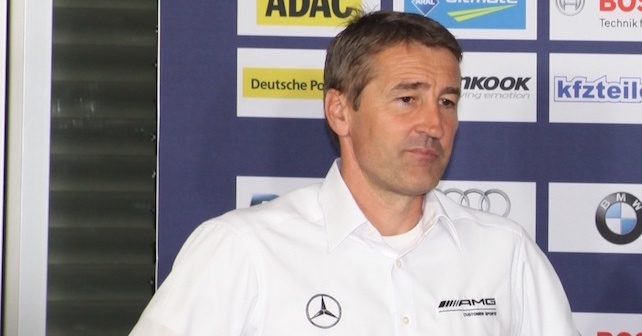 There has been a fair bit of chatter in all manner of media regarding the current state of Formula 1. As the most popular category in motorsport, F1 enjoyed a unique position of attracting fans outside the hardcore motorsport followers whose numbers swelled in the late 90s and early 2000s. With the advent of online journalism and social media a very high percentage of those vocal fans have been given a voice like never before to air their views on many of the sports that became a mainstay on television, including F1. Criticism aimed at the performance levels of the current cars is something that amuses former grand prix driver, five-time German Touring Car (DTM) champion, International Touring Car champion and FIA World GT Championship title holder Bernd Schneider.

The German was in Delhi to officially unveil Mercedes' new 503bhp, AMG GT S sportscar and prior to the launch, spoke to autoX regarding his racing career and his views on F1.

"This is something that goes back and forth and now that the viewership is declining, they are talking about making changes again. But there are always complaints whenever one team does really well."

With reference to the 2017 regulation changes designed to make F1 cars up to five second a lap faster than they are now - by increasing available downforce and introducing fatter, grippier tyres, among other changes - Schneider said he understood the demands of drivers to always want cars that are as fast as they can possibly be with lots of power. Especially those who make it to the winners' circle with a power advantage over others.

"If you were to go back to 1988, you had drivers used to well over 1,000bhp and then suddenly they had less power so that other teams could catch up to McLaren. If you were to ask Lewis Hamilton right now, if he wanted another car than the one he was driving, he would probably say no!"

Schneider does, however, echo many fans beliefs that F1 should not go too heavily into the direction of technology that makes the car easy to drive while supporting advances like the advent of the current 1.6-litre, V-6 turbo engines.

"There are many technologies that can be used like ABS, traction control, automatic gearboxes that are relevant to car companies," said Schneider. "But with F1 one can say that because they have to be the best drivers in the world, you do not need traction control or ABS or things that make driving automatic.

"In the kind of racing that I do now where there are a lot of gentleman drivers you need things like ABS in order to avoid a big accident, but not for the top drivers."

"I know Mark well and I personally think he is a really good guy and I am really happy for him and I hope to be able to see him soon," said Schneider. "He may have had too strong a teammate in Sebastian Vettel, like how Gerhard Berger had Ayrton Senna and Nico Rosberg has Hamilton but he is a really good driver and I wish him all the best."