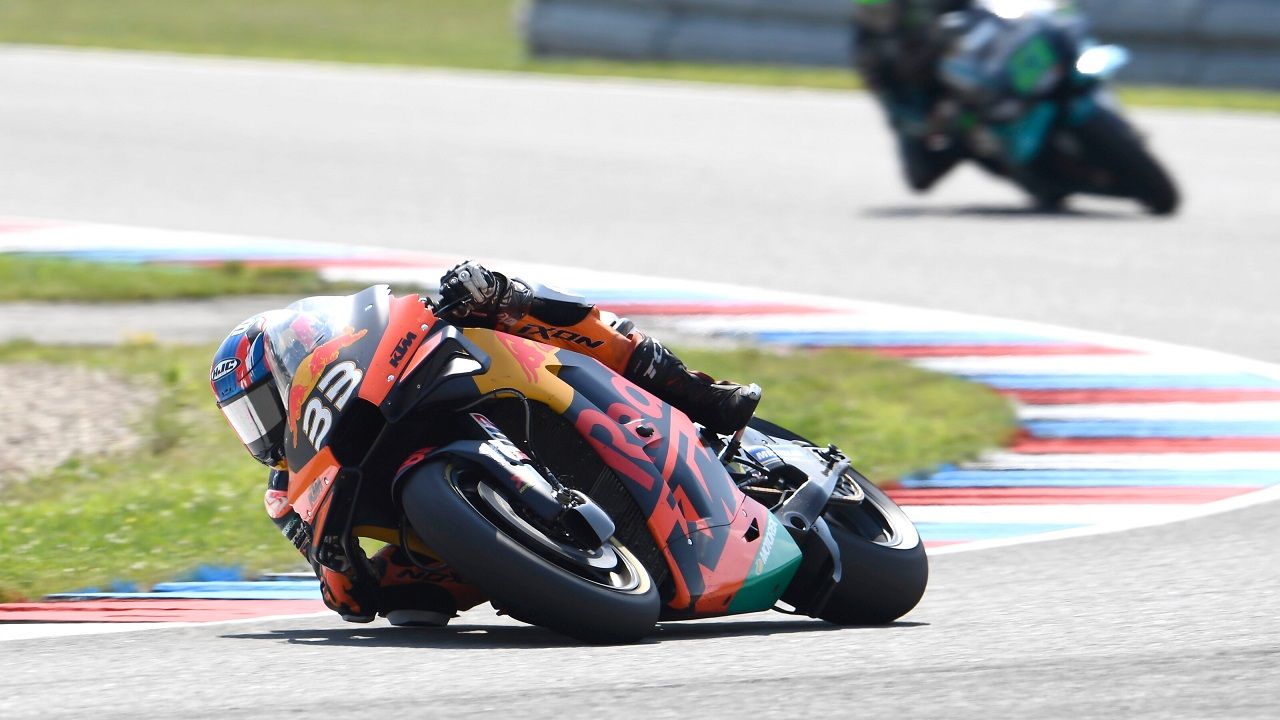 Brad Binder and KTM Racing took their maiden MotoGP win at Brno. The South African became the first rookie to win a MotoGP race since Marc Marquez in 2013.

Brad Binder and KTM took their maiden MotoGP victory in the third round of this year’s championship at Brno, Czech Republic. The South African became the first rookie to win a MotoGP race since Marc Marquez in 2013. The KTM rider was joined by Petronas Yamaha’s Franco Morbidelli and Reale Avintia Ducati’s Johann Zarco on the podium.

Zarco lined up on the grid from pole position, but he couldn’t capitalise on that. Instead, it was Petronas Yamaha’s duo – Morbidelli and Fabio Quartararo – who took charge of the proceedings at the front. However, this time, it was Morbidelli who led the race from his teammate and championship leader. The Italian managed to build a gap of more than a second over Quartararo in a couple of laps. Quartararo, meanwhile, didn’t quite look as unbeatable as he was in the first two rounds at Jerez. The Frenchman couldn’t get Binder off his back, while the KTM’s Pol Espargaro and Zarco weren’t very far either. Binder quickly gained ground on Quartararo and passed him without any real challenge.

Behind, Pol and Zarco were tangled in an intense battle. But Pol managed to get the better of the Ducati rider, and even managed to pass Quartararo to take the third spot. However, Pol made a mistake and ran wide. This allowed Quartararo to move back up in third position. But that wasn’t the real damage for Pol. When he tried to cut back on the racing line, he made contact with Zarco and crashed. It didn’t look like Zarco was at fault, but he was still handed a long-lap penalty.

Up ahead, Binder cut Morbidelli’s advantage and passed the Petronas Yamaha rider to lead a MotoGP race for the first time. Zarco overtook Quartararo and looked all set to take second place from Morbidelli as well. However, because of his long-lap penalty, he lost some time and couldn’t catch Morbidelli after that. He still managed to keep Quartararo at bay, thanks to really quick and clever long-lap stint.

Binder won the race unchallenged. Morbidelli kept his second position. Zarco barely managed to finish on the podium, thanks to a late charge by Suzuki’s Alex Rins, who finished in fourth. Quartararo’s day got even worse as he finished in seventh place since factory Yamaha’s Valentino Rossi and Tech 3’s Miguel Oliveira also passed him in the closing stages of the race.

With reigning world champion Marc Marquez missing from the action due to an injury, Takaaki Nakagami in eighth was the best Honda rider for the day. Pramac Ducati’s Jack Miller was ninth, with Aleix Espargaro (Aprilia) rounding out the top ten.

It was a struggling race for Andrea Dovizioso (factory Ducati) yet again as he was P12. For Yamaha’s Maverick Vinales, it was even worse as after taking back-to-back podium finishes in the first two rounds, he was only good for P14 today.