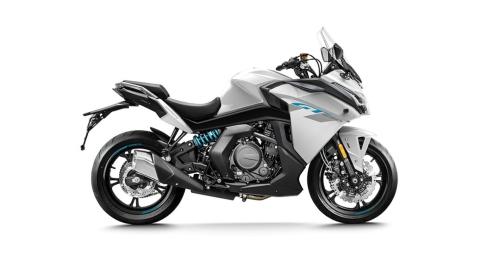 The CFMoto 650GT Mileage is 20 kilometers per litre.

The CFMoto 650GT is the Chinese two-wheeler manufacturer's middleweight sport tourer offering in India. And CFMoto has launched its latest BS6 emissions-complaint variant. CFMoto's 650GT feature's a unique design, litre-class motorcycle-like features and an impressive engine that comes now updated with the latest emissions. Not only does the bike get a few minor changes for its latest variant, but also a few bells and whistles that really set it apart as a sport-tourer. So does the 2021 CFMoto 650GT in India prove itself a compelling package for its price point? Read on for more information.

The CFMoto 650GT has quite unique features in its exterior design. The bike gets a good fit and finish and high-quality paint jobs. One of the most unique features of the bike is the layered fairings that give it a girthy, litre-class bike feel. Other unique features include the bike's face. It gets an L-shaped DRLs integrated into a modern LED headlight design. On the rear end, the bike is minimalistic, with plenty of space under the subframe from saddlebags or panniers. Seating is also rather comfortable-looking, with a thick pillion seat and an appropriately scooped and supported rider seat.

The CFMoto 650GT shares its powertrain with its 650 siblings, albeit in a different state of tune. The bike gets a 649.3cc twin-cylinder, liquid-cooled engine updated for BS6 emission norms. The engine puts down 55.65bhp at 8250rpm and 54.4Nm of peak torque at 7000rpm. It comes linked to a six-speed manual transmission.

The CFMoto 650GT is suspended on KYB telescopic front forks. The rear gets a staggered mounted mono-shock suspension that gets preload-adjustability. Stopping power for the 650GT is provided by twin 300mm discs at the front end and a single 225mm disc at the rear. For safety, the bike gets ABS as standard.

To be a compelling touring offering the CFMoto 650GT gets a fair share of bells and whistles. First of all, the bike gets a unique LED treatment complete with integrated DRLs. It gets an adjustable windscreen on the front as well. Electronic features include a USB as well as a 12V charging port. The bike also gets a TFT display and two riding modes - Touring and Sport.

The CFMoto 650GT is priced in India at ₹5.59 lakhs (Ex-Showroom, New Delhi) for its BS6 edition. The bike gets a single variant and two colour schemes - Concept Blue and Nebula Black. For more information regarding the BS6 CFMoto 650GT, such as its On-Road Price in India, check out autoX's price section. 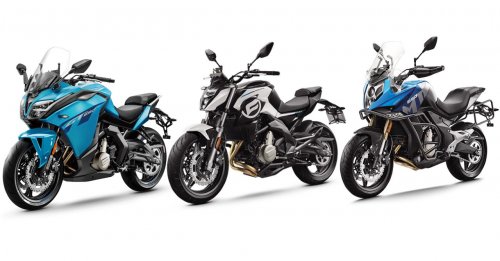 CFMoto commenced the bookings for its 650cc middle-weight motorcycles in the month of May. Now, the 650NK, 650MT, 650GT have made a comeback in BS6 form and the motorcycles are up in price, down in....

When did CFMoto introduce the 650GT in India?

How many variants of the CFMoto 650GT are currently on sale?

The CFMoto 650GT is currently available in 1 variant.