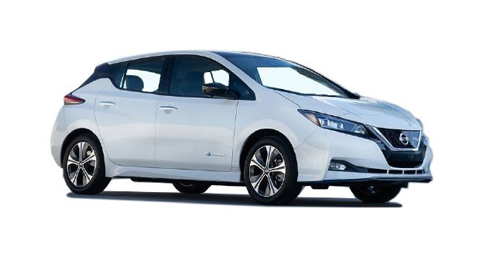 Nissan's Leaf is being evaluated for India, as the car has been spotted testing without camouflage, in a bright shade of red with a glossy black finish up front and at the rear. The Leaf happens to be Nissan's best-selling electric vehicle on foreign turf, and is named the Leaf e+. This new model gets a larger battery pack which helps in an increased range per charge. The Leaf e+ is already selling in some international markets, like Japan.

In terms of styling, the Leaf is a stylish looker. It gets a V-shaped theme at the front, along with sharply styled headlamps. At the rear, it gets vertically positioned LED tail lamps, a diffuser on the lower half of the bumper and a blue accent just above it.

Nissan states that the Leaf gets a 55 per cent larger battery pack, which results in an improved capacity of 62kWh. It powers a 160kW/340Nm electric motor. The e+'s range has also increased to 458km as per the WLTC cycle. Nissan claims that the 100kW Quick charging system will ensure the charge is complete soon. Also, because of its 16-inch wheels, the Leaf's ride height has been increased. Features-wise, it gets an 8.0-inch touchscreen infotainment system and a door-to-door navigation function that syncs the system with a smartphone for smooth driving.

ProPilot, an in-lane semi-autonomous driving technology can automatically alter the distance to the vehicle ahead, with the use of a speed preset by the driver. This feature can also play a part in helping the driver steer and keep the car centered in its lane. ProPilot will apply the brakes if the vehicle in front suddenly comes to a halt.

Another feather in its cap, is e-Pedal, which has the driver start, accelerate, decelerate and stop using the throttle alone. It also helps in smoother operation and enhances pedal feedback.