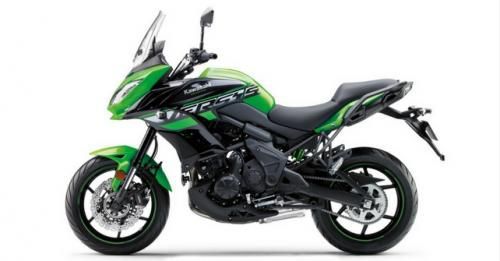 Kawasaki has quietly launched a slightly refreshed version of its Versys 650 in India at a price of Rs. 6.50 lakh - ex-showroom.

For 2018, the Kawasaki Versys 650 gains revised graphics and livery to freshen up its aesthetic appeal. Other than that, the Versys does not get any significant mechanical changes. Last year, Kawasaki added a gear position indicator and a quick adjust fly-screen to the Versys 650, and the new model retains those changes.

The current Kawasaki Versys is based on the previous generation Ninja 650, and shares its powertrain with it as well. This means that a 649cc parallel-twin engine with liquid cooling powers the Versys 650, producing 68bhp and 64Nm. A 6-speed gearbox comes standard.

Up front is a 41mm adjustable upside down front fork, and at the rear is a remote adjustable monoshock. The Versys 650 employs dual 300mm petal discs at the front and a single rear 250mm disc, while ABS is standard.

With the next generation Ninja 650 already out globally since late 2016, we can expect Kawasaki to release an all-new Versys 650 very soon. Till then, the refreshed current model will continue to mark Kawasaki’s presence in the fast growing middle-weight adventure tourer segment.

In India, the Kawasaki Versys 650 primarily competes with the Benelli TNT 600GT.