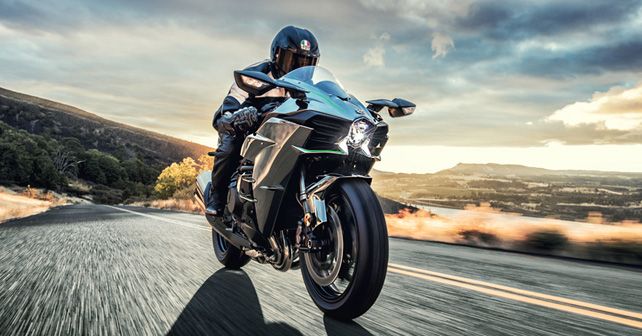 The 2019 Ninja H2 and H2 Carbon will be powered by the most powerful H2 engine to be produced by Kawasaki, generating a colossal 228bhp!

The Kawasaki Ninja H2, when launched here in 2015, was by far the most maniacal-looking production-spec motorcycle not just in India but also in the world. Also claiming the title of being the first supercharged production motorcycle, the H2, if anything, was never short on performance under any circumstances. Well, guess what? Kawasaki has revealed the 2019 Ninja H2 at the Bonneville Speed Week, featuring the most powerful H2 engine unit till date. Besides the big bump in power, the new bike will also receive some visual and equipment upgrades.

The power figure for the 2019 model is 228bhp – 31bhp more than the current model. Kawasaki claims that this increase in power does not compromise the outgoing model’s Euro-IV compliance and fuel efficiency ratings. According to Kawasaki engineers, this balance of power and fuel-efficiency has been achieved because of the fact that a number of parts have been taken from the Ninja H2 SX. The torque has also been increased by 8.2Nm, taking the superbike's total to 141.7Nm. In terms of mechanical components, the 2019 H2 will get an updated air-filter, intake chamber, spark-plugs and ECU. This power upgrade will allow the H2 to take on the 211bhp Ducati Panigale V4, which is currently the most powerful road-legal production superbike on sale today. Despite the changes, the H2 retains its kerb weight of 238kg.

The 2019 motorcycle will also get new Bridgestone RS11 tyres and Brembo’s top-spec Stylema callipers, which were first seen on the Ducati Panigale V4. The H2 will also get a new H2 SX-inspired TFT multi-function display compatible with Bluetooth connectivity. What's new is that this screen will now work with Kawasaki's new ‘Rideology’ mobile application, which shows vehicle information such as fuel level and battery condition as well as a riding log and service interval updates.

The 2019 Ninja H2 will be available in Mirror Coated Spark Black colour, while the 2019 Ninja H2 Carbon will be offered in Mirror Coated Matte Spark Black/Golden Blazed Green. Like the current H2 models, the new bike will continue to be offered with Kawasaki's ultra-durable paint, which can 'self-heal' small scratches and protect itself when exposed to a warm climate or a bit of heat. The new bike will also feature a 'supercharged' emblem to emphasise its USP.

While the official prices for the 2019 model are yet to revealed, we expect the new Ninja H2 lineup to be certainly priced above the current ₹33.30 lakh retail price.