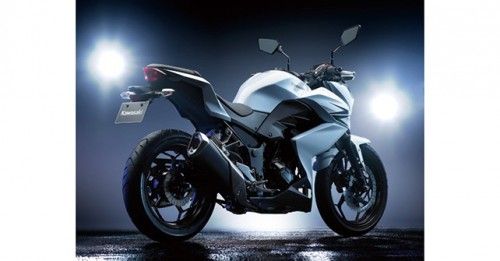 Japanese bike maker Kawasaki just recently launched a brand new 250cc version of the Z1000 motorbikes that could very well make its way to India. The design of the naked Z250 is based on the larger Z models and looks very interesting. The instrument cluster gets taken from the new Ninja 250R, while the panels and lights imitate the Z1000. The engine has also been borrowed from the Ninja, which is a four stroke 249cc twin cylinder liquid cooled engine that comes with a 6-speed gearbox. The power specs have not been officially stated, but we can rightly assume that the specs remain the same as the Ninja 250R – almost 30bhp and 22Nm of torque.

Several other components and specifications found on the Z250 have also been taken from the Ninja 250R, such as the frame and telescopic fork setup in the front suspension and the monoshock in the rear, but at the same time the Z250 manages to stay 4 kilograms lighter than the Ninja250. This is a brand new naked entry level sports bike and the seating position provides for an upright riding position with wider handlebars, making it perfect for city ridding as well as touring.

The arrival time of this bike in India has not been disclosed, but with such a promising modern design and a decently powerful engine, not to mention backing by Bajaj, the all new Kawasaki Z250 will definitely make a heavy impact on the 250cc segment in India. The Z250 will lock horns with the other 250cc segment contenders such as the KTM Duke, Bajaj Pulsar 200NS and Honda CBR250R. The all New Z250 will be priced somewhere around Rs 1.5 lakh, but if the Japanese bike makers can manage to keep the pricing down, the bike will be competitively positioned and the market will surely heat up.