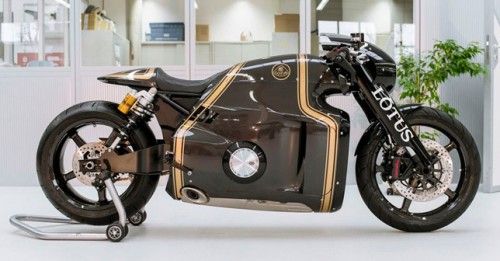 Earlier this year Lotus surprised us all with teaser images of a motorcycle the company was planning on designing. Soon after the images surfaced we got to see what the production model of the bike, but not many  of us were happy with the bikes overall design. But that hasnt stopped Lotus from going ahead and building the C-01 motorbikes, because there are customers out there that actually quite liked the bike

We have just received word from Lotus that the first batch of the exclusive 100 units  have rolled-off the assembly line and will be delivered to customers shortly. That means we might be seeing these radically designed motorbikes - the brainchild of Bugatti designer  Daniel Simon - on roads very soon.

The C-01 is powered by KTM's RC8R superbike engine, which is a 175bhp 1,195cc V-twin. The bike also has a host of superbike specification parts like Brembo brakes, Ohlins suspension and a steel trellis frame built by Kalex, which is co-owned by Holzer Group - the company which just so happens to be behind the Lotus project. The entire bodywork of the bike is made of carbon-fibre, which covers the entire mid-section of the bike.

The bike pictured above is the first bike ready for delivery and it has chassis number 99, because customers were allowed to select the number of their choice.