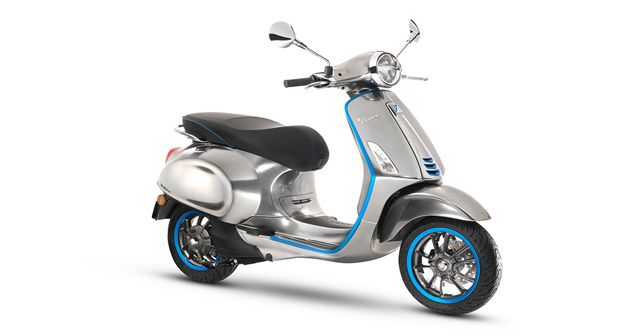 The first ever electric Vespa is all set for its market launch in Europe.

The electric version of the iconic Italian scooter Vespa will soon be a reality as its parent company, Piaggio group, has announced the start of production of the Vespa Elettrica from September 2018 in Italy. The all-electric scooter will go on sale in Europe from October 2018, while it’ll make it to the US and Asian markets from 2019.

The Vespa Elettrica made its debut at the 2016 EICMA show as a concept model. The following year, Vespa revealed the specifications of the all-electric scooter, and now the company is planning to coincide its launch with the show yet again in 2018.

The production version of the Elettrica is expected to retain the iconic retro style of the regular Vespa, but will obviously come with a clean and silent heart. The electric scooter will be propelled by a lithium-ion battery that produces 2kW of continuous power and 4 kW of peak power. As per the company, this setup will give it a superior performance to a traditional 50cc scooter. Well, while that might be true, you’ve to say that there aren’t many 50cc scooters out there. That said, there’ll also be an ‘X’ version which will be a hybrid scooter, featuring a conventional internal combustion engine to charge the battery pack. The all-electric version will have a range of 100km, while the X derivative will “double the range” claims Vespa. The Vespa Elettrica will also feature some cutting-edge technology such as smartphone connectivity, a digital colour instrument cluster, et al.

While Vespa has confirmed of the Elettrica making it in Asians markets next year, we aren’t sure if it’ll be coming to India anytime soon. However, if it does come to India, it’ll be competing against the likes of Ather Energy 340 & 450. And like these two, the Vespa Elettrica will also come at a premium price.