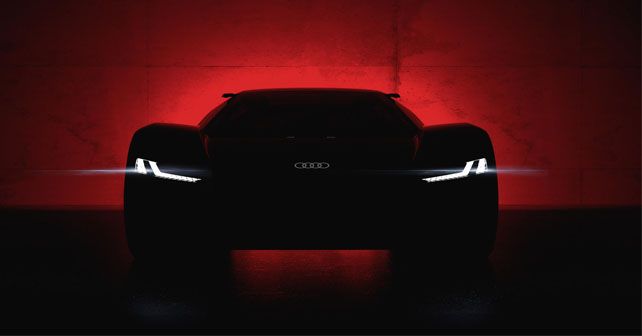 Audi's all-electric supercar concept to preview the future of performance cars from Ingolstadt.

Be prepared to witness Audi unveil a futuristic supercar concept at the Pebble Beach Car week at the Laguna Seca racetrack on August 23, 2018. Dubbed the Audi PB 18 e-tron, the show car will apparently give us a glimpse of Ingolstadt’s electrifying future.

According to Audi, the PB 18 (it stands for Pebble Beach 2018) e-tron is a ‘futuristic electric design study for the performance enthusiast driver’. The concept takes inspiration from the company’s Le-Mans winner R18 e-tron, but it’s certain that it won’t be running on diesel power – it’s going to be propelled by electricity, which is why Audi says that the concept is all about ‘emotion instead of emissions’.

Coming to the design details, the teaser of the new supercar concept shows some typical Audi traits – a wide and muscular front fascia with sleek LED headlamps. The interesting bit here is that it isn’t a work of Audi’s regular design team, instead, it has been conceived and designed by the firm’s North American design house – Audi Design Loft – in Malibu, California. Expect the PB 18 e-tron to have some not-so-familiar lines and angles.

After its global unveiling on August 23, the concept car will be shown for three more days until August 26. On the last day, it'll be showcased at the Concours d’Elegance in Pebble Beach, where it will be joined by its close cousin and Bugatti’s brand new Divo hyper car, which is also going to make its debut around the same time.