Only 999 units of the Audi R8 RWS will be produced.

After Audi rebranded its performance division, Quattro, to Audi Sport in 2016 - it was long speculated that the VW owned carmaker might launch a rear wheel drive performance machine. The German carmaker has now finally revealed what is the first rear wheel drive iteration of its popular R8 sportscar.

Christened as R8 RWS (Rear Wheel Series) - this new Audi has a limited production run of 999 units with both coupe and convertible body styles. According to Stephan Winkelmann, CEO of Audi Sport - the R8 RWS is ‘made for purists’.

In its RWS avatar, the R8 coupe weights 1,509kg - which is 50kg less than the Quattro version,  while the convertible saves about 40kg over its all wheel drive sibling. Audi has achieved this by eliminating the propshaft, multi-plate clutch and center differential - because the rear wheel drive setup doesn't need these components.  Audi claims to have tuned chassis specifically for the new drivetrain setup. 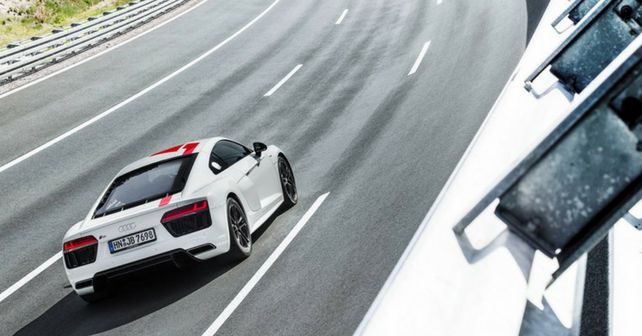 Visual differences over the Quattro model are mainly limited to the coupe version only, which include - gloss black upper sideblade, and R8 LMS GT 4 inspired optional red film running over the hood, roof and rear end. Inside of both coupe and convirtable, the driver and passenger sit in sport seats covered in leather and alcantara. Bucket seats are available as an option. The dashboard bears an emblem - indicating the limited number of units.

The Audi R8 RWS is powered by a mid-mounted V10 petrol engine producing 540 horsepower and 540Nm of torque. This naturally aspirated 5.2-litre FSI engine accelerates the coupe from 0-100km/h in 3.7 seconds, and convertible in 3.8 seconds.