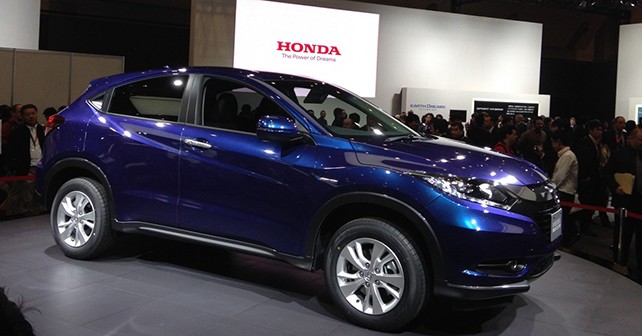 After Honda previewed the Urban SUV Concept in January this year, we were wondering what happened to the car. Honda today unveiled the planned production version  inspired by this concept and has christened it Vezel. Honda has not let on about the details of this car and we will know more on December 19.

The Vezel is smaller than the CR-V and fuses the “dynamic qualities of an SUV, the elegance of a coupe and the functionality of a minivan”.

The design of the Vezel expresses SUV-like stability in its lower body and coupe-like styling in its upper body. The interior design on the other hand, makes way for personal space for the front seats and minivan-like elbowroom, comfort and functionality for the rear seats.

The Vezel will go on sale in Japan on the 20th of December and will come in both hybrid and petrol versions. The hybrid model will be equipped with the Sport Hybrid i-DCD 1.5-litre direct injection engine with a ‘high-output’ electric motor. So, expect the 108bhp and 134Nm torque churning Atkinson-cycle petrol engine combined with the electric motor.

The petrol model will also be equipped with a 1.5-litre direct injection engine sans any motors ofcourse. We do expect it to come to India sooner rather than later but for that Honda will have to up the ante when it comes to localisation of components.

Honda has already done wonders with the Amaze and we will soon see the Mobilio MPV here too and the new City will also be a strong contender. Honda has its foot on the gas and it’s pumping out products, brace yourselves Honda fans!