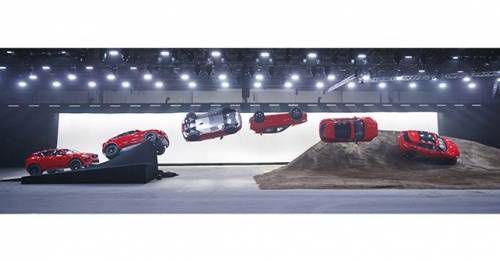 The Jaguar E-Pace set a Guinness world record at its world premiere with a 50-foot long barrel roll jump.

At the global unveil of the Jaguar E-Pace, the brand new SUV already made its mark by breaking a Guinness world record. With an aim to prove their ‘Art of Performance’ philosophy, Jaguar used the opportunity to set a new world record when they successfully attempted the Furthest Barrel Roll in a Production Vehicle with their new baby SUV.

The E-Pace set the new record of 270-degree corkscrew-like ‘barrel roll’ jump when it covered a distance of 15.3 m / 50 feet. Jaguar stated that the record attempt was the final test for the E-Pace which has already undergone 25 months of real world testing, on different surfaces and climates across four continents, to ensure the durability of the vehicle.

The E-Pace is Jaguar’s entry level SUV which sits below the larger F-Pace. The E-Pace is a five-seat, all-wheel drive, compact SUV which was piloted by Terry Grant, a feature film stunt driver who holds 21 Guinness world record titles to his name. During the ‘Barrel Roll’ stunt with the E-Pace, Terry required a 160 metre run up to be at the optimum speed for a successful attempt. During the stunt, data revealed that Terry experienced G-Force levels of 5.5 during the twisting jump.

In 2015, Jaguar introduced the F-Pace, their first ever SUV. At the official unveiling of the car, Jaguar had then attempted and broken the Guinness world record with the loop-the-loop stunt. Next year, Jaguar is slated to reveal their first ever electric SUV, the I-Pace next year. It is safe to say, that Jaguar may make another world record attempt, only time will tell which one it will be.

To know more about the Jaguar E-Pace, click here

Watch the video of the Jaguar E-Pace breaking the world record here: