Volkswagen Beetle production stopped: The end of an era! 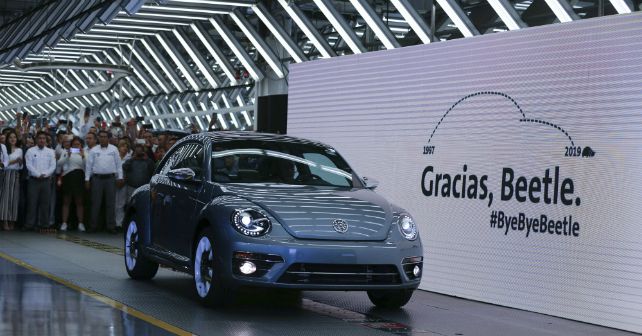 Despite being in production for more than 80 years, from 1938 to 2019, there have only been three generations of the iconic Volkswagen Beetle. VW brought the new Beetle into India in 2015 and discontinued it in 2018.

It is the end of an era as Volkswagen permanently suspends production of the iconic Beetle. The last unit of the Beetle rolled off the from Volkswagen’s Puebla plant in Mexico. This one will make its way to the VW museum in the city.

Speaking about the Beetle, Scott Keogh, President and CEO Volkswagen Group of America said, “It’s impossible to imagine where Volkswagen would be without the Beetle. While its time has come, the role it has played in the evolution of our brand will be forever cherished.”

The Beetle first came into production in 1938 and was quick to establish itself as the people’s car subsequent to the second World War. With sales totalling more than $23 million over 81 years, the Beetle was one of the most important products for the Volkswagen brand. Interestingly, in all these years, there have only been three generations of the iconic Beetle. The first generation was on sale for nearly 60 years, before the new one was introduced in 1998. The German car maker gave the car a modern and sleeker look with its third-generation update in 2011. While initial sales in the global market were strong, the numbers have been gradually dwindling forcing Volkswagen to discontinue production.

At the time the last of the first-gen Beetle was produced in 2003, the company had sold more than 21.5 million units of the car. In comparison, the second-gen model sold just 1.2 million units from 1998 to 2010.

From being a symbol of the prosperity of the middle-class in Europe and America to an image of counterculture, the Volkswagen Beetle has been more than just a car. It has been an icon, one that has lived long and strong through the ages.