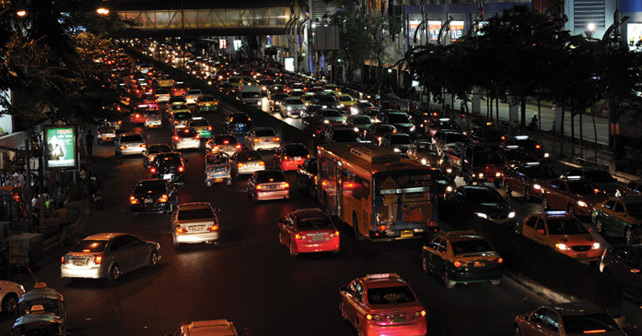 Folks living in Mumbai always say they feel relieved when they visit Delhi, and the sole reason for this is the momentary respite from the madness on the roads. But that’s not really the case anymore. Delhi’s roads are slowly becoming completely choked, which isn’t really surprising since about 600 cars get added to the roads of the National Capital every single day. My commute of 16 kilometres to office involves driving on a wide and well-paved toll-road that allows relatively high driving speeds – and yet it takes, at most times, close to an hour to complete this relatively short journey. Yes, if I leave home before 8 in the morning, it takes barely 20 minutes – but any time between 8am and 9pm triples the commuting time. Some of you might not know what the Kanwar Yatra is, or who the Kanwariyas are. I’m not going to get into a boring history lesson, but I am going to tell you that they’re devotees of Lord Shiva and undertake long pilgrimages to offer the holy water of the Ganges to Shiva in Devghar, in Jharkhand. Do you vote? I hope you do – those who are eligible that is. It’s absolutely great to see the candidate you voted for win, isn’t it? What’s even better is seeing the best candidate win – ensuring great prospects for the city / state / country. These are two very different events, but they do have one similarity. The devotees marching to Devghar are – and I’m prepared for the hate mail – nothing short of a nuisance on the road. They are hooligans who, because of their sheer numbers, create havoc on the roads and appear to be waiting for any spark to ignite a brawl – giving them an excuse to set vehicles on fire! A lot of them are inebriated, and some even have groups of bikers as cheerleaders who accompany them while yelling praises of Lord Shiva. But the entire act lacks conviction when you look at it. Instead of soul searching, this pilgrimage appears to evoke crime and wreck havoc. And supporters of political parties are no less destructive. A political party’s win in the elections is the announcement of mayhem and disorder for the general public. They’re worse even than the religious groups. They don’t respect the public one bit, and they feel that occupying the entire width of the road – now that their candidate is in power – is their birthright. Have you ever thought about how much loss this causes to the country? Imagine the man-hours lost by people not getting to work on time, and the amount of fuel being burnt owing to extended hours spent driving at crawling speeds. And if that wasn’t enough, there are hoodlums around every street corner in silly clothes who can’t wait to get into a brawl. And I’m not exaggerating – I’ve seen it happen. The point is this – the revised Motor Vehicle Act is a step forward on certain counts, but could be enhanced that much more on other ones. We need to have better traffic management, better infrastructure, and, more importantly, a way for these parades to take place on routes other than the main arterial roads and highways. Alternate routes should be devised for such celebratory movements. And now I must go and join my joyous relatives who are dancing in the middle of the road to celebrate a distant cousin’s wedding. Idiots!