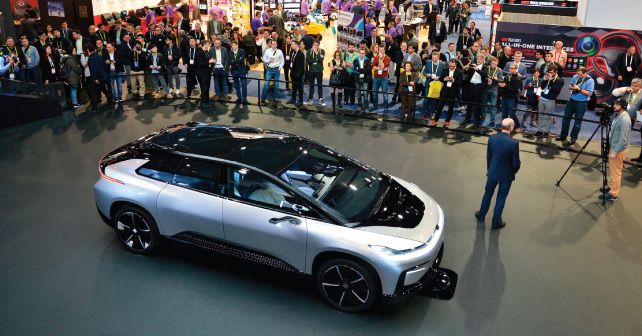 Everyone’s heaping abuse on Elon Musk, but he appears to be doing a stellar job in front of another electric vehicle start-up. Karl provides some insight…

About a year ago, I was chatting with a colleague about a forthcoming vehicle. He called it ‘vapourware.’ I said let’s wait and see. Eleven months went by and finally a pre-production vehicle rolled off the production line. I gleefully sent him a link to the video, and he scornfully mocked. Again, I said let’s wait and see. It has now been twelve months and something happened recently to make me think he may be right.

You see, a former motoring scribe whom I used to follow ended up turning to public relations, as is often the way. He headed up a Japanese carmaker’s PR department, and seemed to be doing quite well. And then his LinkedIn profile suddenly changed. He mentioned a new venture, something exciting. And soon the reason became apparent – he was joining Faraday Future.

You may remember the specs that accompanied the first teaser images – here was an EV that was able to produce 1,050hp, go from 0-100km/h in under 2.4 seconds, give you over 480kms from a charge and unlock with facial recognition. Pretty impressive stuff… if you can make it work. And really, you should be able to, given the amount of cash that has been injected into the company. But we’ll get to that in a minute.

See, the PR manager who turned up at Faraday Future was instantly hired as public relations manager for this Chinese start-up. His experience definitely wasn’t in question, and neither was his ability. In fact, he did an outstanding job for FF, getting some great pieces written and generating a fair amount of enthusiasm for the project. But you’ll notice that was written in past tense. Yes, he tendered his resignation recently, and, as someone who would have been close to the management team, it seems he saw the writing on the wall.

Despite the company’s Twitter feed proclaiming that final shakedown testing for the suspension is happening and that things are progressing nicely, behind the scenes things are getting a little vicious. The company’s CEO, Jia Yueting, recently requested around US$700 million in funding. But that’s on top of the $800 million already invested by Chinese real estate group Evergrande. Where on earth does that money go to?

Some of it will be on lawsuits. The Mill, which is a New York-based video production company, was commissioned by Faraday to produce a well-executed presentation at the CES trade show. The cost was around $1.8 million dollars. Guess how much it has been paid thus far – $20K. And so the matter has gone to court. In 2016, it failed to pay a construction firm for a plant in Nevada where it was supposed to build the FF91, and that went to court. Then in 2017 staff were cut, the CEO’s assets were seized and suppliers were left unpaid. And that’s just the tip of the iceberg.

After that pre-production vehicle rolled off the line and was proudly shown to the world, it was said to have caught fire. And yet the company says it will have working vehicles by the end of the year. Based on the company’s history, I have my doubts.

My colleague said he doesn’t enjoy being right about Faraday Future. Yet, it seems the FF91 is destined to indeed be vapourware. With everyone heaping abuse on Tesla at the moment, I’d still rather be Elon Musk than Jia Yueting.