A challenge On 3 Fronts - Audi A3 Sedan 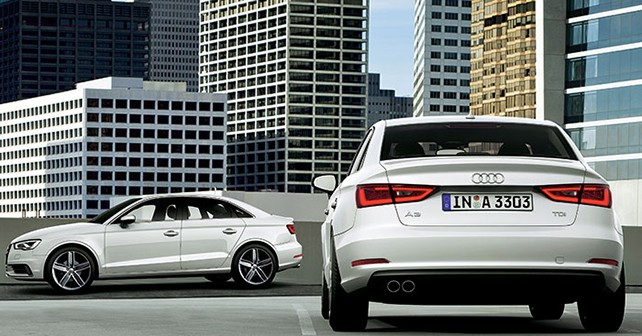 The compact car from Ingolstadt puts on a boot to satisfy markets like the American, Chinese, and Indian, that can’t seem to get enough of this type of body-type.

New York or Shanghai? Until the last moment, the two auto shows were vying over who would get to showcase the new Audi A3 Sedan – the first three-box version of the popular model. In the end, it was the Big Apple that secured the honours by staging a separate show exclusively for Audi. Eventually, it mattered little whether it was the West or the East which prevailed because, inherent in this challenge was the clear message that whatever arena the new model chose to play in, one thing was certain – it would not be in Europe. The A3 Sedan is going after the young consumers in the US – where the love for the three-box body-type has never really faded. Plus, it’s going after the Chinese (and Indian) consumer, for whom the presence of the boot remains virtually indispensable for a car to be worthy of its name.

It may yet become fashionable

What about the Europeans? Are they now considered second-class clients? Not really. Underneath it all, Audi still believes that it can be discretely successful on European shores, however risky it might be to make these hopes public. Audi thinks that the time might finally be ripe for Europe to embrace a three-box luxury compact car. This is not a bourgeois model for old people, but a stylish product and a highly desirable one at that.

One thing’s for sure, if Audi is wrong, then Mercedes is making the same mistake as well – as evidenced by its heavy reliance on the CLA to rejuvenate the median age of its clients.
So, what are the cards that the A3 sedan can play to win a place in the current automotive scene? Firstly, a refined and athletic design, which is amply compensated by the harmony among its design, and by textbook design execution. Secondly, there’s the same mechanics found on its two-box sister, with the MBQ platform modularity that gives it a contained mass (see below), a weight distribution between the two axles that assigns 60 percent to the front and 40 percent to the rear, a rear axle with four link suspension, and a fistful of newly-renovated engines. When it’s finally launched (by late summer in Europe), there will be three 4-cylinder engines – two petrol, and one diesel, available with a six-speed manual gearbox or a dual-clutch S-tronic. The turbodiesel engine is the classic 2 litre 150bhp version, which, on the sedan, claims a fuel economy of 24.4km/l. The petrol engines are the 1.4 and 1.8 litre TFSI units, which supply 140 and 180bhp respectively. The smallest engine boasts fuel consumption levels not that much higher than the diesel engines, at around 21.3km/l.

In the cabin, the sedan mirrors the design of the hatchback, along with the improved advanced infotainment system.

On the podium of featherweights

How much does the compact executive sedan weigh? Not much, according to the manufacturers. This is in large part due to the use of high-strength steel and aluminium. The tail adds a mere 75kg to the five-door versions weight. We put it on a weighing scale, and compare it with somewhat similar cars – although engines and measurements are not always homogeneous. The result: the A3 is beaten only by products from Skoda and Seat.

It’s an all out battle between the badasses

One could object and say that the true duel will only be possible after the arrival of the RS – the more logical rival of the AMG. However, while waiting for the extreme version, it’ll be up to the S3 sedan to confront the racing challenge posed by the CLA 45 AMG Mercedes – on sale this summer in the West. The S3 should be out by Fall. Both are driven by 2 litre turbocharged 4-cylinder engines, self-limited at 250km/h, which distinguish themselves thanks to their power and performance. The 360bhp supplied by the Mercedes engine enables the CLA to hit a time of 4.6 seconds to 0-100km/h, while the Audi S3 ‘makes do’ with 4.9 (in the version with the S-tronic transmission, 5.3 in the manual) courtesy of 300bhp (with a max torque of 380Nm against the 450 of the AMG). With respect to the Audi, the S3’s ride height is lower by 2.5 centimeters. It has 18-inch wheels, sporty seats and Audi Drive Select as standard.