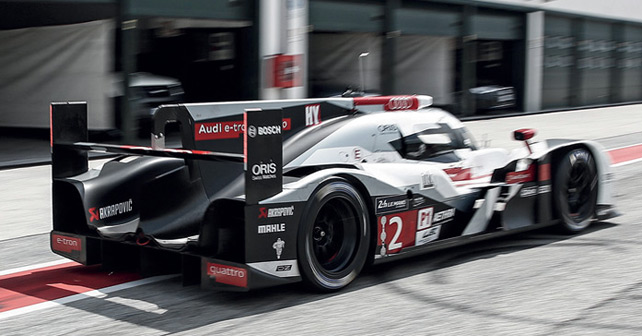 The knight that we’re referring to is our correspondent, who got behind the wheel of the Audi R18 e-tron Quattro – the very same that won the 24 Hours of Le Mans this year. Needless to say, the drive at Misano was incredible. The R18, a hybrid like no other, is truly a feather in Audi’s cap.

It’s a mean machine par excellence. By any yardstick, the R18 e-tron is very complicated and tough to understand – at least for mere mortals like us, who aren’t used to driving these kinds of race cars daily. The kind folks at Audi gave me a small ‘instruction booklet,’ which has everything you need to know before getting behind the wheel and starting an adventure such as this. But everything begins with getting into the car!

The instructions say I should stand on one side, at a predetermined and well-identified point – otherwise there’s risk of damage to the car – and then get into the seat. So, with the left hand clinging onto the air intake on the roof, and right hand on the edge of the door, I can attempt to drop myself into the tiny cockpit of the R18. Getting into the car is not so easy, because the driving position is the same as Formula 1 cars – which keep your feet up, much higher than your bottom. 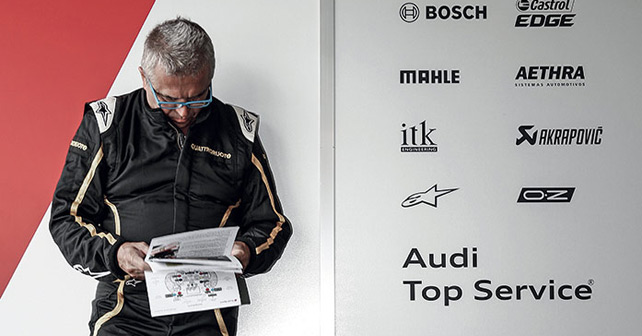 Sixteen pages of precise instructions and tips to understand the R18. The manual contains a large section devoted to ‘electric’ security

A diligent technician attaches the steering wheel for me, a device that could cause a real headache – with its buttons, knobs, and levers. He fixes another system, the HANS safety collar, and then tightens the six-point seat belt. In Le Mans, this entire process is done in a few seconds. How? I have no idea. But it’s clear that it takes a lot of practice to reach the levels of swiftness that the professionals manage. There’s no air conditioning, and the sweltering heat doesn’t help much.

The space in the cabin is miniscule, and between the helmet and the tiny windows, you can see very little – barely enough to understand which way to steer the car. However, there is a camera that shows what’s going on behind you. The communication with the outside world is only by radio. The LEDs on the left of the dashboard are also placed on either side of the bodywork – these are warning lights for the mechanics. If green, they indicate that the hybrid system is safe and working fine.

Leena Gade, race engineer, has the task of guiding me through the next stage of this test. After selecting ‘4’ on the knob marked ‘Mode’ on the steering wheel, which manages the hybrid system, I have to push down the DMS lever (Driver Master Switch). At this point, the LEDs start to flash rapidly, indicating that the system is ready to energise. Now I can start the engine. After pulling the clutch lever (which is positioned low, behind the steering wheel) with the left hand and selecting first gear with the right paddle, I push the red button on the steering wheel. The V6 fires with a soundtrack that’s totally different from any other racing engine that I’ve ever heard. To start off, I have to ease of the clutch gently to avoid over revving the engine. The speed limiter prevents the driver from crossing the 60km/h mark when inside the pits area. As soon as I disable the speed limiter, the R18 gains speed rapidly.

After a ‘quiet’ lap on the track to gain some confidence with the car and its controls (you brake only with the left foot), I’m ready to be a little more daring. The first true lap allows me to accelerate using assistance from the hybrid system, which is completely different from any other machine on the planet.

A FLYWHEEL TO ACCELERATE
When you press the brake pedal, the front electric motor becomes a generator that, contrary to the usual method, isn’t used to recharge the batteries – but to rotate a flywheel at very high speed (using a second electric motor), which feeds back the stored energy when you accelerate hard. So, for anywhere between 3 and 6 seconds (it depends on how the system has been set), you get access to 230 more horses – which add up to the 537bhp and 800Nm from this V6 turbo diesel. That explains the extraordinary acceleration when coming out of curves.

The V6 does not rev very high, as it touches the redline at a little over 5,000rpm – but the total torque of the two motors is truly extraordinary. The gears come one after the other, while I’m literally glued to the seat. On this fast, challenging circuit, the sensation is even more amazing. Thanks to the very sophisticated aerodynamics, the vertical load is really high. Marc Gene, who finished in second this year in an identical car, was telling me just after Le Mans that the braking and cornering force was around 3G’s – performance that puts the R18 very close to the current Formula 1 cars, and, in some conditions, even higher. I feel as though I’m floating around in another world – a world that’s hard to understand, and even harder to explain.

GLUED TO THE ASPHALT
The limits of the car are constantly changing, depending on the speed – and are on a totally different plane to even the most powerful and sophisticated road legal sports cars. This car is insanely fast, and I can only imagine scenarios that just a few professional drivers have the ability to interpret. Lost in philosophising about the incredible performance of the ‘ground effects’ of the car, the voice of Leena Gade in my earphones brings me back to reality. It’s the end of playtime, and I have to go back into the pits. But first I need to discharge the hybrid system in order to avoid getting to the pit area with 500 volts running though the car! The procedure involves turning the Mode knob to position 12, a half lap to stop the flywheel, and turning off the entire hybrid system (DMS lever off). Getting into the pit lane with the speed limiter activated, the speed drops to 60km/h. In just a few seconds, I stop in front of the Audi pit box with the engine off. There’s an eerie silence, but the atmosphere is, well, electrifying. The green LEDs on the dashboard are lit up and blink slowly. Yes, it’s time to get out of the car.. 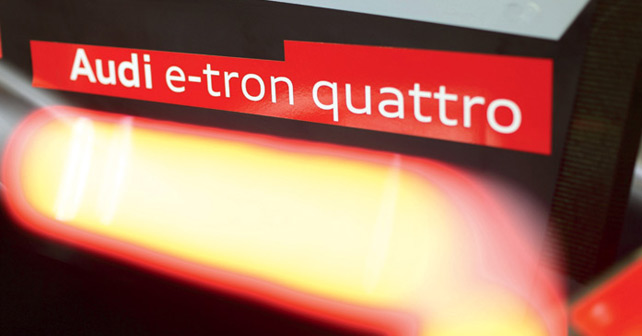 E-TRON is an abbreviation that is common to all hybrid cars from Audi. The R18, winner of Le Mans, is of course much more advanced than conventional vehicles. The flywheel, in fact, while very light and very efficient on the racetrack, is not practical on everyday vehicles. The e-tron series, therefore, use the more traditional lithium-ion batteries to store the energy recovered during braking. Unlike the racing cars, the road going machines are plug-ins, which means they can be charged using a wall socket – but they only work in electric mode for short distances. The A3 Sportback e-tron, for instance, uses a hybrid electric-petrol engine with a total power of 204bhp, for a claimed average fuel consumption of 66.7km/l, with emissions of 35g/km of CO2 and a 50 kilometre electric range. The new Q7 is also going to be ready soon, and it will debut with a brand new diesel-electric hybrid power plant. 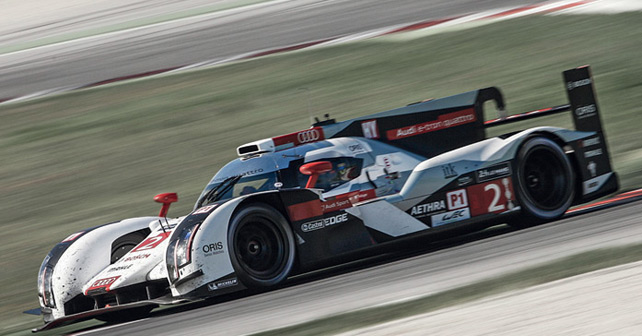 Here it is, the legendary number 2 – the car that was driven by the trio of Fassler, Lotterer and Treluyer, which triumphed at the last Le Mans 24-hours. We drove it at the Misano Adriatico circuit

Final preparations before getting behind the wheel of the R18 e-tron: 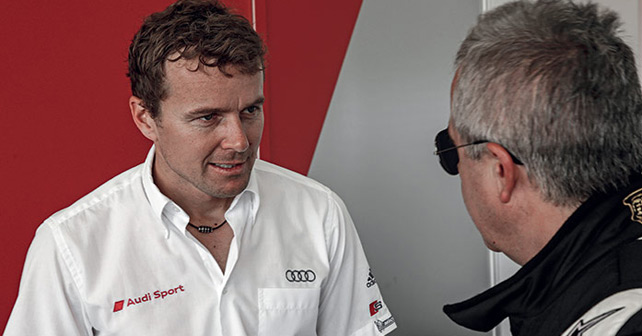 1) Marcel Fässler has some final words of advice 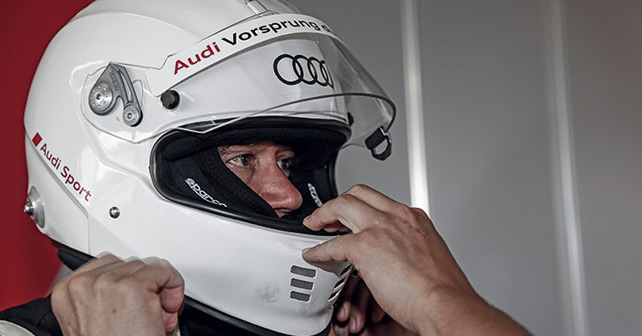 2) Headphone, microphone, balaclava and helmet. Now just the HANS device, and we can get in the car 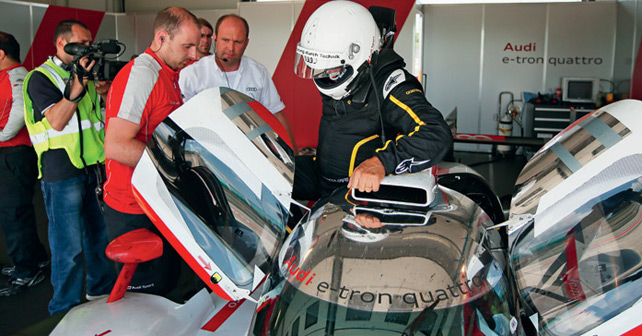 3) Stand on the seat, contort slightly, and slide into the cockpit 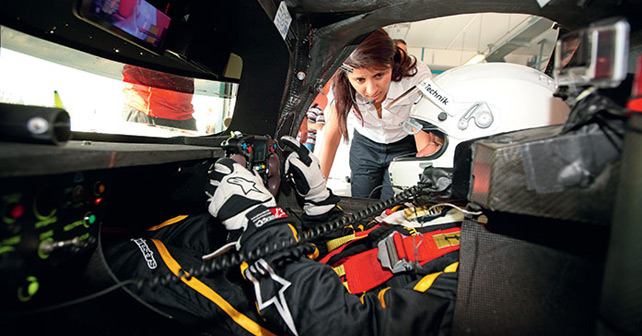 4) Leena Gade, race engineer for the number 2 car, which won at Le Mans, guides me through the complicated starting procedure 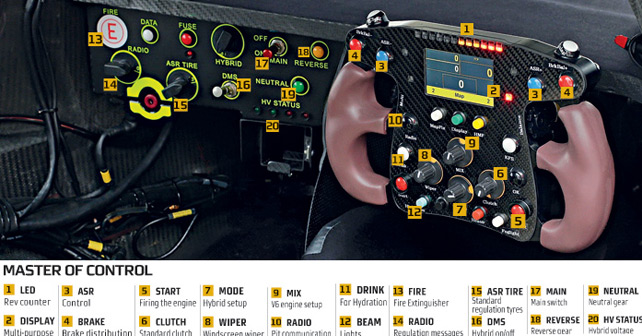 The steering wheel is very complex (perhaps even more so than on a Formula 1 car), as it possesses all the important controls – particularly the four knobs that manage the mapping of the engine, the hybrid system, the response of the clutch, and the operations of the wiper. On the left of the dashboard are the controls that are used less often, including the lever that activates the hybrid system (DMS), the radio settings, fire protection system, and so on. Behind the wheel, in addition to the two gearshift paddles, there are four more levers – two (twin paddles) for the clutch, another lever to flash the lights (on the top left) and, on the right, the pit speed limiter. 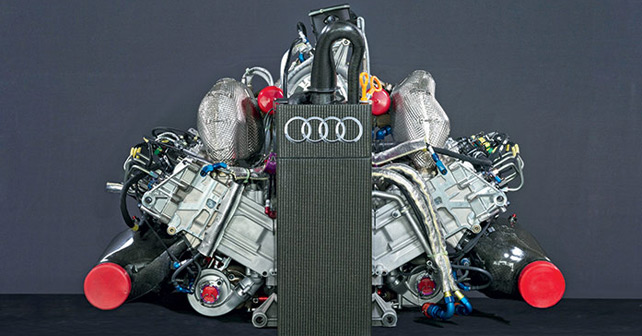 NEW rules forced German engineers to completely redesign the car for the 2014 season. The result? The R18 now goes harder and consumes significantly less energy (30%) than last year! The basic layout hasn’t been changed, but it’s been further optimized. The internal combustion engine (a 4 litre, V6 turbocharged diesel with a unique large turbo) drives the rear wheels, while the electric motor is for the front wheels. The energy recovered during braking is stored in a flywheel that returns the energy each time maximum power is required. This is a simple, lightweight system that allowed Audi’s engineers to design a car keeping in mind the minimum weight limit (870kgs). With great attention to detail, the R18 boasts of outstanding aerodynamic efficiency – about 5kg of vertical load per kilogram of resistance, which is almost double that of current Formula 1 cars. The R18 also has a 50:50 weight distribution, and the size of the tyres are the same on both axles.