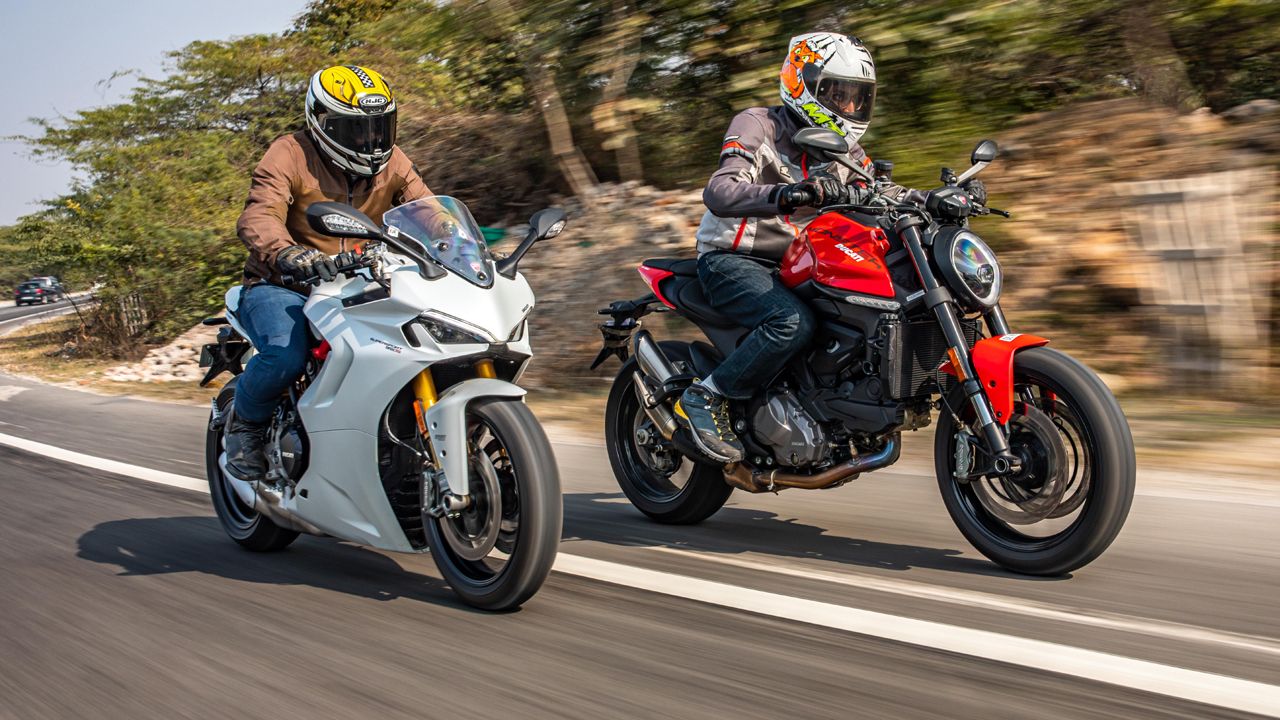 The new SuperSport 950 S offers a spoonful of Ducati DNA, speed, good looks, and practicality. We pit it against the all-new Monster to find out which one is the ultimate ‘daily Ducati’.

This is it. It’s happening. Your cryptocurrency bet paid off; the stocks are green; the bonus just came in. You’ve got enough cash, and you’re ready to dump it all on a shiny new Italian motorcycle. Enough of the sensible Japanese business, it’s time to be a little silly – it’s time to buy your first Ducati. But let’s not throw all sensibility out the window. Since this could just be your first ‘big’ bike, you might be looking to ride it more often than the average ride-once-a-fortnight superbike owner. Now, this actually makes things easier because as far as everyday Ducatis are concerned, you have two main contenders – the SuperSport 950 and the Monster. 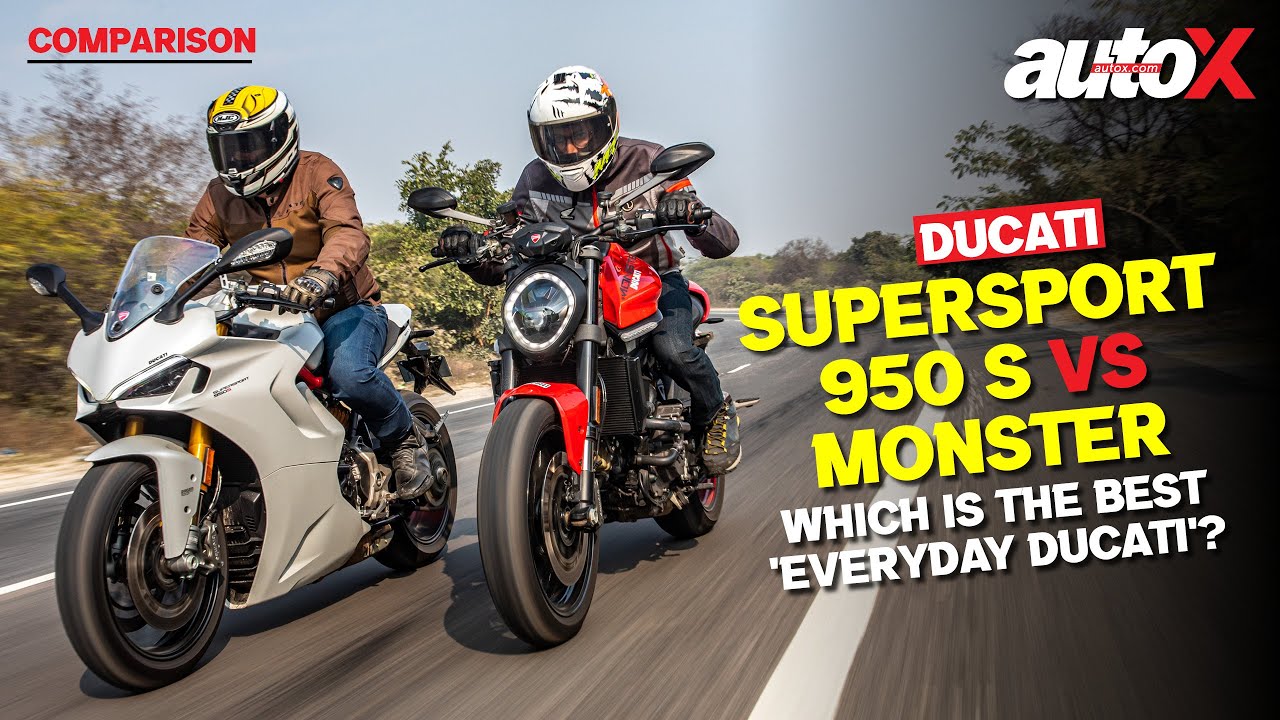 Two of a Kind?

If you look at the spec sheets, you’ll see that these two bikes are pretty evenly matched on paper. They share the same 937cc Testastretta L-twin engine, six-speed gearboxes, with bi-directional quick-shifters, twin 320mm Brembo M4-32 Monobloc four-piston callipers handling braking duties up front, and a 245mm disc with a two-piston calliper holding fort at the back. And both bikes come with 120/70 R17 (front) and 180/55 R17 (rear) Pirelli Diablo Rosso 3 tyres.

The L-twin engine in both bikes puts out similar power and torque figures too. The SuperSport 950 makes 108.6 bhp at 9,000rpm and 93Nm at 6,500rpm, while the Monster churns out marginally more power at 109.9bhp coming in at 9,250rpm and the same 93Nm at 6,500rpm. Both bikes also get a full suite of electronics, including riding modes, traction control, wheelie control, and cornering ABS. So, even as a beginner you should stay right-side-up if you don’t do anything too silly. So, almost identical, right? Well, not quite. You see, these two bikes differ in price – the SuperSport 950 S in Arctic White pictured here costs ₹15.69 lakh, while the Monster range starts at ₹10.99 lakh. But that’s on paper because once you get on the saddle, you’ll see that these two bikes aren’t as similar as you might think. 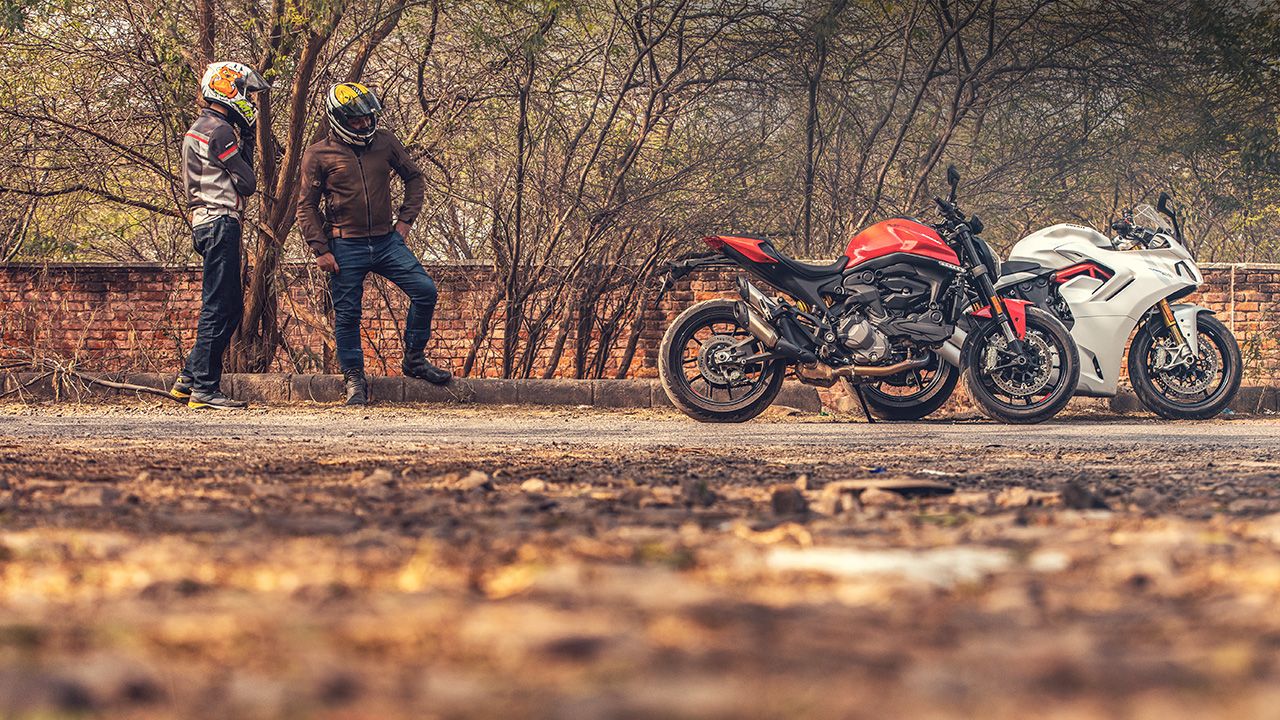 Let’s talk about the SuperSport first. For 2022, Ducati has given it a sharper look up front, a new upswept exhaust, a more extensive electronics package, and… well, that’s about it. Under the skin is a tubular steel trellis frame, which the 2022 Monster swapped out for a new (lighter) frame. And this says a lot about the SuperSport, it isn’t an all-new bike like the Monster is and shares some of its top-heavy characteristics with the last-gen Monster. Don’t get me wrong, the SuperSport is still a sweet, sweet motorcycle out on the open road, but since we are trying to help you pick an everyday Ducati, let’s tackle the practical bits first.

As a faired motorcycle, the SuperSport is quite comfortable. The seat is wide, the clip-ons don’t hang too low, the footpegs aren’t too rear-set, and even the powertrain won’t throw a fit while snaking through traffic. The L-twin is surprisingly tractable actually. There aren’t oodles of torque at the bottom-end, but 80 per cent of it is available at just 3,500rpm, which is more than enough for most overtakes in the city. The gearbox is also well-matched, and you don’t need to fiddle with it too much. 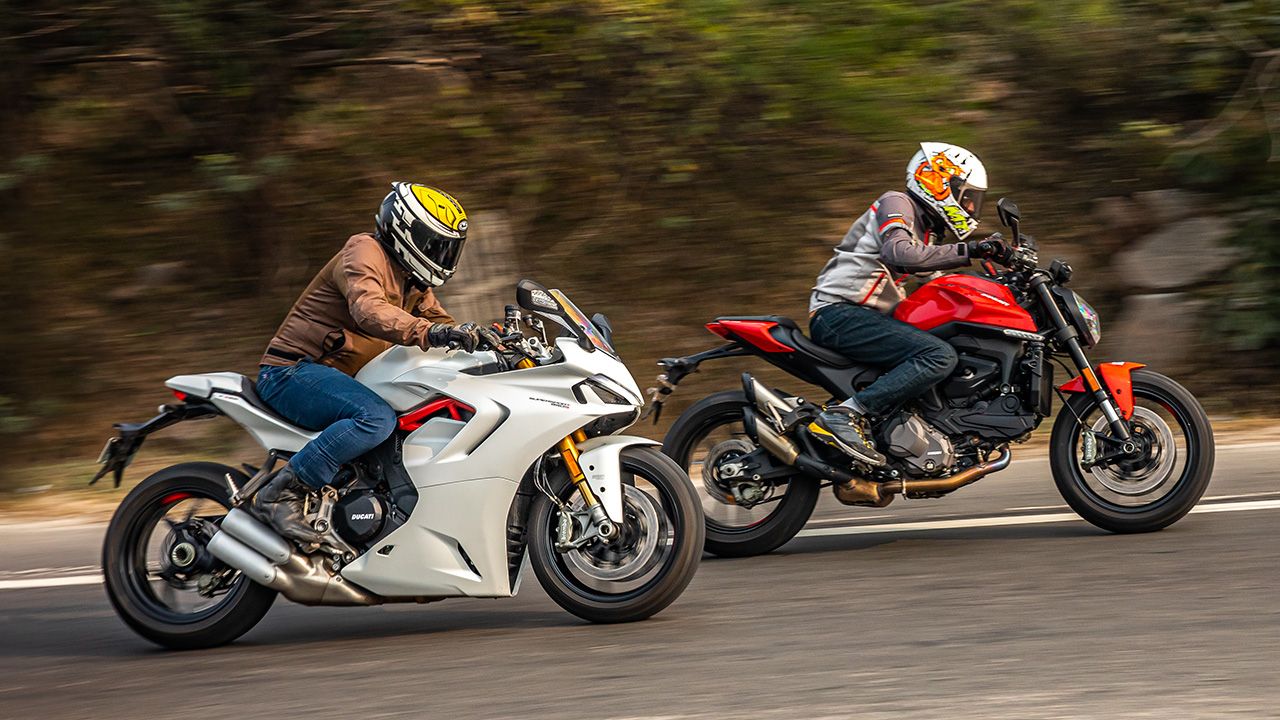 Of course, all of these aspects of the powertrain also apply to the Monster, but it isn’t all sunshine and rainbows when you’re riding slow.

Both bikes heat up in traffic – quite a bit actually. It’s not something you can’t get used to, but it’s an inconvenience nonetheless – if I felt it in winter, you’ll definitely feel it in summer. The clutch, especially on the Monster, is hard, and stop-go traffic will leave your left arm jealous of the right one. However, you will still be more comfortable managing traffic on the Monster than on the SuperSport. It’s no surprise really. The Monster is a naked motorcycle, which means the riding position is far more upright, and the rider’s triangle isn’t as aggressive. Also, the new aluminium alloy front frame gives it better balance and, at 188kgs, makes it lighter too, compared to the SuperSport’s 210kgs kerb weight. All this adds up to make the Monster an easier bike to ride in most everyday situations.

Okay, so the Monster wins the game in the city, but how does it score against the SuperSport on the highway or on the more twisty sections of the road. Now, the SuperSport is a Ducati that’s meant for sport touring, which makes it feel like an incredibly capable motorcycle on the highway. You can easily cruise at 120km/h all day long, without even awakening the L-twin from its slumber. If you were to, say, find yourself on the main straight of the Buddh International Circuit and twist the throttle, fourth gear is enough to take you past 175km/h. And you still have two more gears to go.

So, it wouldn’t be an exaggeration to say that, in the real world, you’ll run out of road before you run out of power. The SuperSport is incredibly planted at high speeds too and won’t let your confidence falter for even a moment. The adjustable windscreen keeps most of the windblast away from your face, and the riding position is perfectly suited for long hours on the highway. When the straight road ends and you hit some corners, the SuperSport takes them on with poise and control. The front isn’t as razor-sharp as, say, a Panigale, but what it loses in terms of sharpness, it gains in terms of being less twitchy – something that almost glides from corner to corner. This is helped by the Öhlins suspension on both ends, featured on the ‘S’ variant. There’s a 48mm fully-adjustable USD fork at the front and a fully-adjustable mono-shock, with an integrated gas tank, at the rear. This gives the SuperSport’s ride some suppleness on imperfect roads while keeping the rider in direct communication with what the machine is up to underneath them. The SuperSport really rides with such sophistication that it is rarely out of its depth on our road conditions. And when you exit a corner and twist the throttle, it races to the next one with urgency. 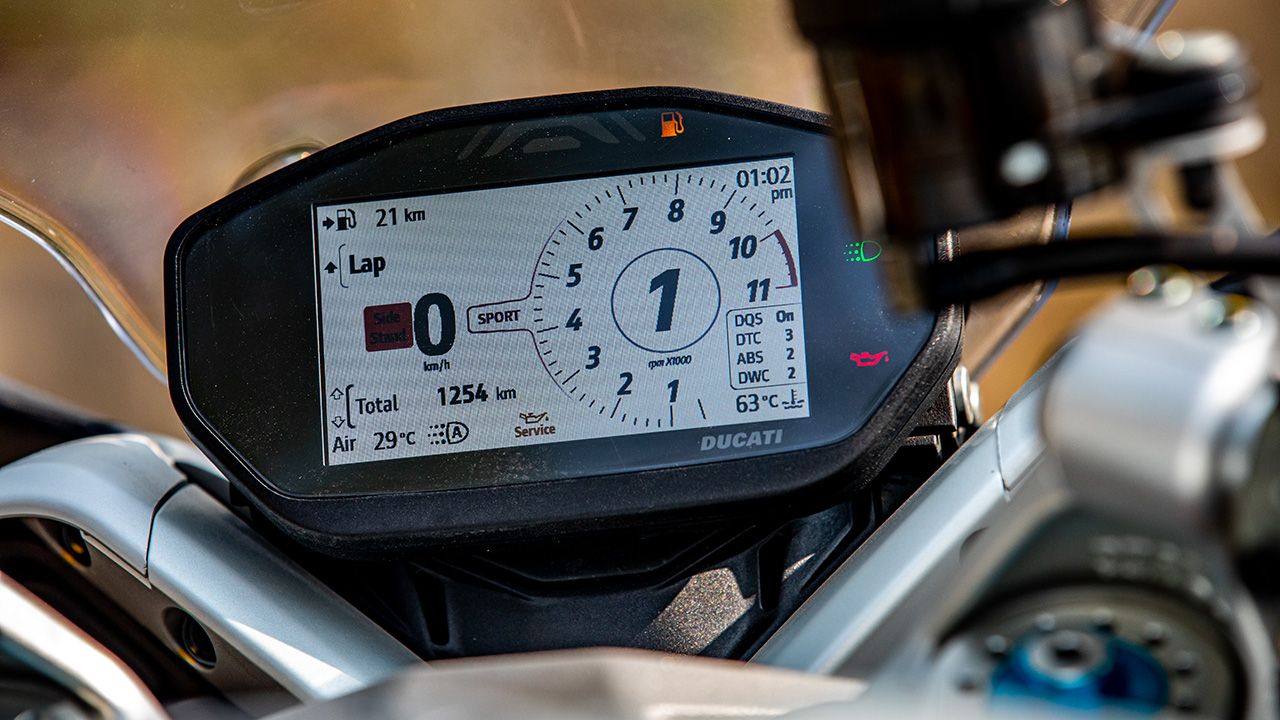 There’s a lot of performance here, no matter what riding mode you’re in. Speaking of which, there’s three to choose from – Urban, Touring, and Sport. In Urban, the engine is capped at 74bhp, the throttle responses become blunt, and the wheelie control, traction control, and ABS systems are on full alert. Switch over to Touring, and the full 109bhp is unlocked and the electronics become more lenient. And as the name suggests, it is ideal for covering long distances without any fuss. Sport, on the other hand, dials down the electronics to a point where you can get it to power wheelie (just a little) if you’re snatchy with the throttle, which is also sharpened up in this mode.

Of course, Ducati also lets you customise these modes via the full-colour TFT display, which allows you to have a super safe setup or one without much electronic intervention if you’re feeling particularly loony. That said, the electronics package on both these motorcycles works so seamlessly that you really don’t need to switch it off. It doesn’t slap you on the wrist if you make a mistake – it taps you on the shoulder and says, ‘I have your back.’ Both bikes also feature bi-directional quick-shifters, which work very well above 4000rpm, rev-matching the downshifts quickly and smoothly while also delivering crisp upshifts. It does fumble a few times but far less than most other quick-shifters.

The Monster offers the same intoxicating rush of performance as the SuperSport, but the fact that it is lighter means there’s just a little more urgency. The Monster feels raring to go more often. Since you’re naturally putting less weight on the front, it is also easier to get that front wheel to lift up if you’re overly aggressive with the throttle. 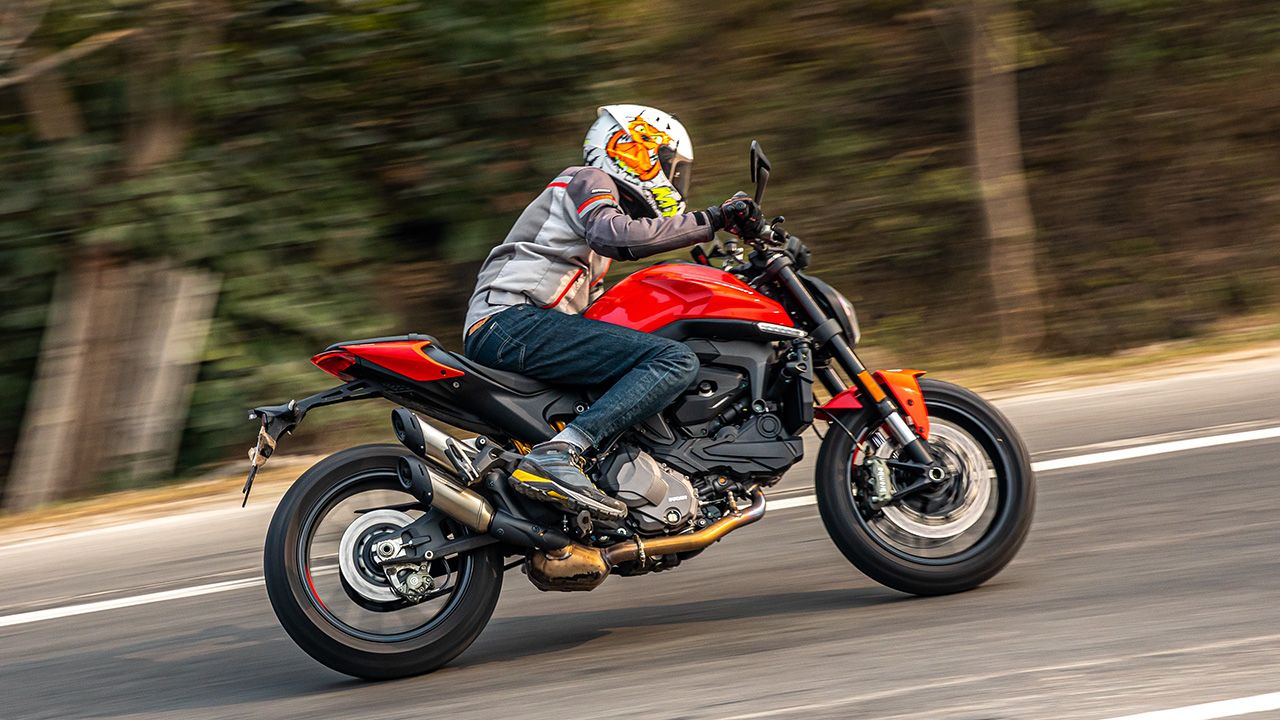 While the SuperSport has the relaxed attitude of a St. Bernard, the Monster feels like a scruffy Rottweiler. But, surprisingly, the Monster feels arguably better around corners. You may not find yourself to be ‘one with the motorcycle’ as you would on the SuperSport, but it is slightly better balanced, leans with less effort and its sharper, more nimble front-end add up to a more engaging ride. While it is a little twitchy, once you get the hang of its mannerisms, it will inspire a lot of confidence. I must point out that mid-corner bumps can unsettle the Monster, which the SuperSport is often unfazed by, thanks to the sublime Öhlins. The Monster, on the other hand, gets a 43mm USD fork up front and a preload-adjustable monoshock at the rear. The suspension is marginally stiffer on the Monster, which doesn’t necessarily translate to a sportier setup either. However, both these motorcycles handle bad patches, potholes, and bumps rather well.

So, which one should you buy? Well, the SuperSport 950 S is arguably the one to have if your priority is a good-looking bike – it really does look stunning. The SuperSport is also the one to have if you’re planning lots of long-distance highway rides, mainly, because of the windscreen and the larger 16-litre fuel tank – the Monster gets a 14-litre fuel tank. On the flip side, the SuperSport has substantially less ground clearance and scrapes on most sharp speed breakers, which is something to consider if you often encounter them during your rides. The SuperSport, although relatively easy-going for a faired motorcycle, is nowhere near as comfortable as the Monster for everyday use. The SuperSport is ideal for two, three, or, even, four days a week of riding, but more than that and you’d find yourself longing for a massage come Sunday. And if you aren’t planning to ride it every day, why not skip the SuperSport and splurge on the Panigale V2 instead? 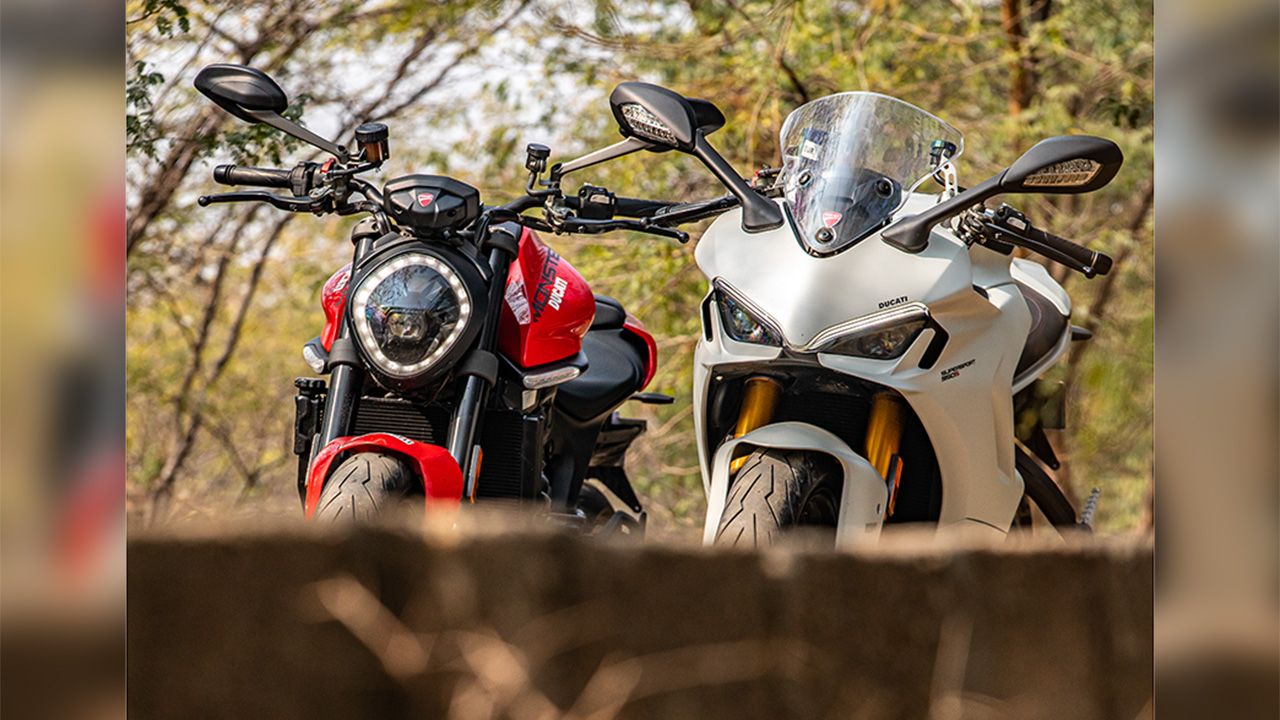 That’s exactly where the Monster takes the cake for me – everyday usability. It has enough ground clearance to tackle even the Mount Everest of speed breakers, and its less committed rider triangle will not only keep your back ache-free for a longer period but will also put less weight on your arms. It also attracts less attention, which may or may not be a good thing for you, but the fact that it has a better power-to-weight ratio, almost identical equipment, and costs less money makes it the Ducati to have if you’re planning to ride it every single day.

X-Factor: The Monster is a bike you can use every day, with enough performance to keep you on your toes. It has a breadth of ability to tackle most situations.

X-Factor: A Ducati that turns heads, goes like stink and is also comfortable enough to ride almost every day. 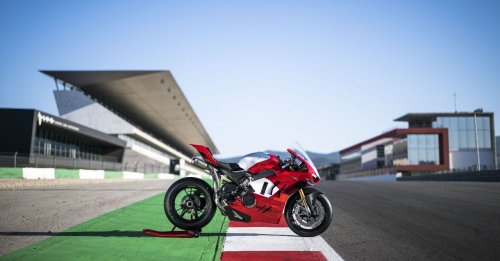 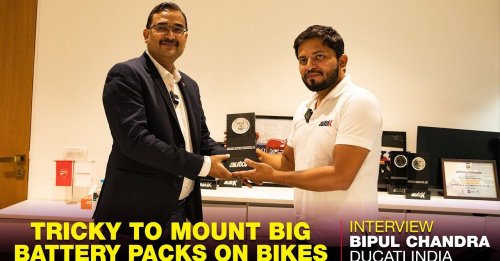 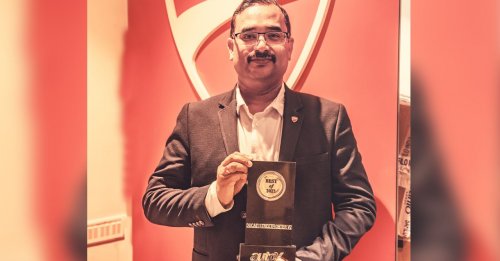 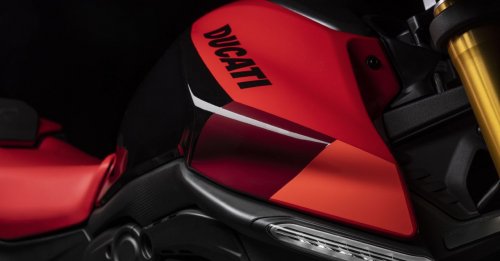 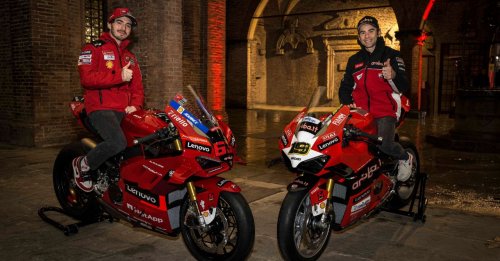 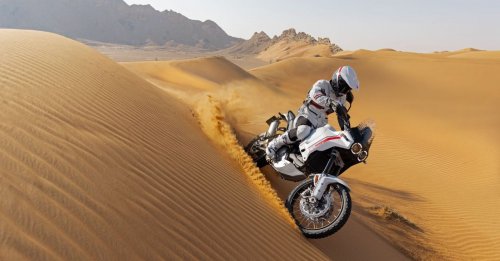