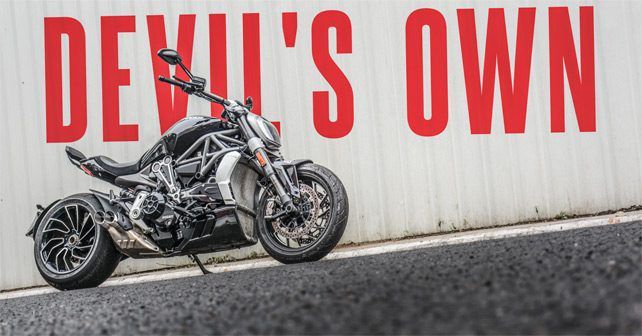 With the X prefix, Ducati’s power cruiser may have become more laid-back but it’s also a shade more devilish now…

“Ignurànt comm’ al diavel!” Apparently, that’s what one of the Ducati employees exclaimed when the first prototype of the Diavel rolled off the production floor in Borgo Panigale. In Queen’s English, what he said was this: “Evil, like the devil!” Ducati was immensely impressed with that reaction – so-much-so that it decided to send its new motorcycle to showrooms carrying the same name, and probably gave that worker a decent raise too.

Now the problem is that that this story dates back to 2010 – or even before that perhaps – when the original Diavel was launched. And, as bonkers as the Diavel still is after all these years, Ducati thinks that it’s high time to make the power cruiser a bit more devilish. So, to scratch that itch, the Italian firm has now come out with the XDiavel.

At the launch event of the XDiavel in India, the firm kept highlighting “Black” as the theme of this new motorcycle – so as to emphasise the dark side of what already happens to be quite a devilish machine. And while there’s no doubt about the fact that it looks absolutely beastly, there’s more to this bike than meets the eye. You see, with the XDiavel, Ducati wants to position it directly against the power cruiser segment – taking the fight straight to the likes of Harley and Triumph. As a result, Ducati says that this bike has been built from scratch.

But the obvious question is this – the Diavel is already available in the market, so why take the trouble of producing a brand new motorcycle that, for most part, looks identical to the old one? But Ducati will calmly clear your doubts quoting just these three numbers – 5,000, 60 & 40. And what do those stand for? 5,000 is the number of revs at which the engine delivers its maximum torque – meaning it’s now got more low-end grunt and accessible performance. 60 are the number of adjustable ergonomic configurations on this motorcycle, so as to give the rider a tailor-made riding position. 40 is the lean angle in degrees, which means that it’ll still take corners like a sports-bike. But, essentially, this is a cruiser motorcycle. So it has a wide handlebar, the foot-pegs are set forward, and it’s the first Ducati to feature a belt final drive – a quintessential cruiser trait for smoother power transmission and low maintenance. 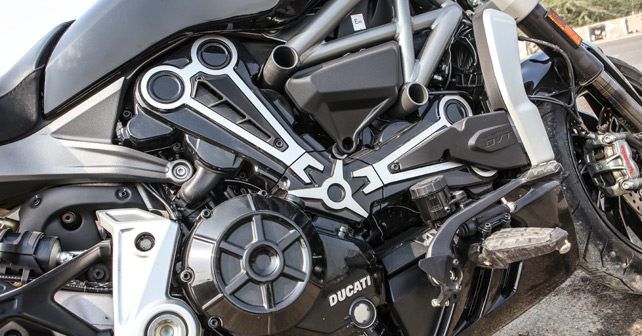 Next up is the engine – a 1,262cc L-Twin motor featuring DVT or Desmodromic Variable Timing system, churning out 154bhp at 9,500rpm and 130Nm of torque at 5,000rpm. For reference, the regular Diavel is powered by a 1,198cc L-Twin engine that has a higher power output of 160bhp @ 9,250rpm along with a torque of 131Nm that kicks in pretty late at a peaky 8,000rpm. And that’s one key point to note if you want to understand Ducati’s logic behind the XDiavel. The Diavel is predominantly a sports-bike that thinks it’s a cruiser, but the XDiavel starts life as a steadfast mile-muncher – albeit one that can switch roles if need be. Get the drift?

Now, once you’ve figured out what the XDiavel stands for, there are two versions to choose from – Standard and S. Technically, both are identical – meaning that they’re equally brutal. But you shell out an extra Rs. 2.60 lakhs for the S version, which adds more bells and whistles over the standard XDiavel. The XDiavel S gets LED DRLs, machine finished rear wheel & swing-arm, Bluetooth connectivity and sharper Brembo M50 monobloc front brake calipers. Our test bike, of course, was the fully kitted out S version.

As intimidating as it looks in pictures, it’s a complete different story when you meet the XDiavel in person. It’s petite, but at the same time it’s a sight to behold with its exposed trellis frame, single-sided swing-arm, machined belt covers on the engine & wheels, slash-cut exhaust pipes and billeted rear view mirrors – among other exquisite bits. The XDiavel S is jaw dropping to say the least. Take it for a ride in traffic and it’ll instantly make you feel like the centrepiece of your surroundings. The world literally comes to a halt just to gaze at this extraordinary piece of modern motorcycle art. Sure, when you’re riding a Harley or Triumph you get a lot of attention – but when people see you on one of these they’re guaranteed to be awestruck. The XDiavel is sinfully gorgeous! 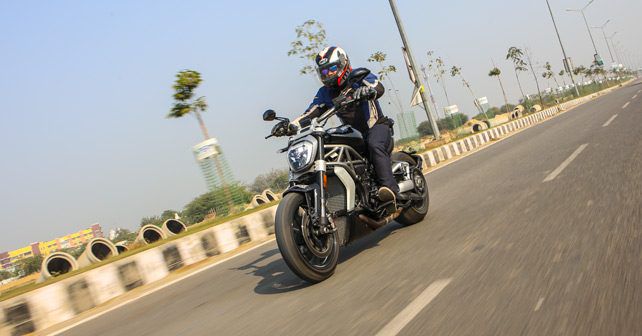 However, with its wide handlebar and feet-forward riding position, riding the XDiavel in stop-go traffic is far from enjoyable. I, for one, can tell you that I was sweating bullets – on a chilly winter morning that is – while encountering moderate traffic in Delhi. The thing is that, at 247kgs, it’s not a light motorcycle by any stretch. Plus, the rake has increased to 30-degrees from the regular Diavel’s 28-degrees, and the wheelbase is now stretched by 35mm (1,615mm vs. 1,580mm). Suffice to say, the XDiavel is meant to be ridden on the open road.

Before setting out on a long-ride though, you must get acquainted with the squadron of electronic aids that come on-board the motorcycle. Ride-by-wire throttle, ABS, traction control, cruise control, launch control, IMU (Inertial Measurement Unit) – everything is available. Plus, there are 3 selectable riding modes – Urban, Touring and Sport. In Urban mode, power output is restricted to just under 100bhp, while traction control and ABS are set at higher levels. While there’s ample grunt, throttle response is a bit jerky in this setting. Select Touring, and you get all 154 horses on tap, but the traction control and ABS still remain in alert mode. If you opt for the Sport mode, the engine unleashes its maximum potential, while the electronic nannies are asked to relax a bit. Since the motor feels liveliest in this setting, I decided to leave it in Sport.

When you let the motor lose, the XDiavel really comes onto its own. To be honest, when you’re out on the highway, the L-Twin is so wild that it singlehandedly takes charge of the proceedings. You simply can’t concentrate on any other aspect since you’re so busy riding the torque wave. The power delivery is seamless, since the engine’s been tuned to deliver a reasonably flat torque curve. At just 2,100rpm, the engine is feeding 98Nm to the rear wheel. Rev it harder and the pull gets stronger – the exhaust note, meanwhile, offers a deep bass while you do feel a slight tingle on the handlebar.

As far its cruising ability goes, the suspension doesn’t feel all that plush and the ride gets a bit choppy over bumpy sections. On the upside, the slightly stiffer suspension setup coupled with a remarkably light front end and fat Pirelli Diablo Rosso II tyres ensure that you can have plenty of fun even when the going gets twisty. I don’t mind that trade-off – and, if I may suggest, so shouldn’t you.

Ducati says that the XDiavel redefines the power cruiser motorcycle segment. And, while I’m not sure how kindly old timers – those folks who swear by classics from Harley-Davidson and Triumph – will take that suggestion, I think I’ve fallen deeply in love with the XDiavel’s mischievous way of going about high-speed cruising. Now if only I could find 20-lakhs in change lying around… 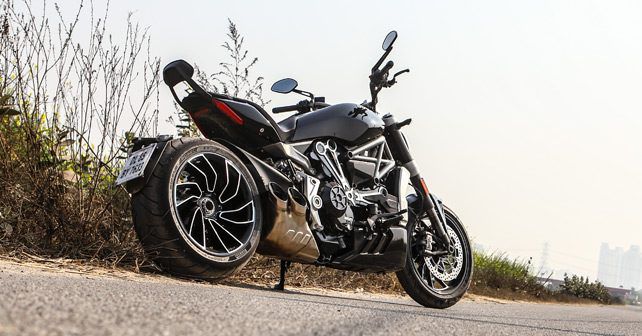 X-Factor: Sinister looking and madly powerful, it straddles a beautiful balance between a power cruiser and a sportsbike.