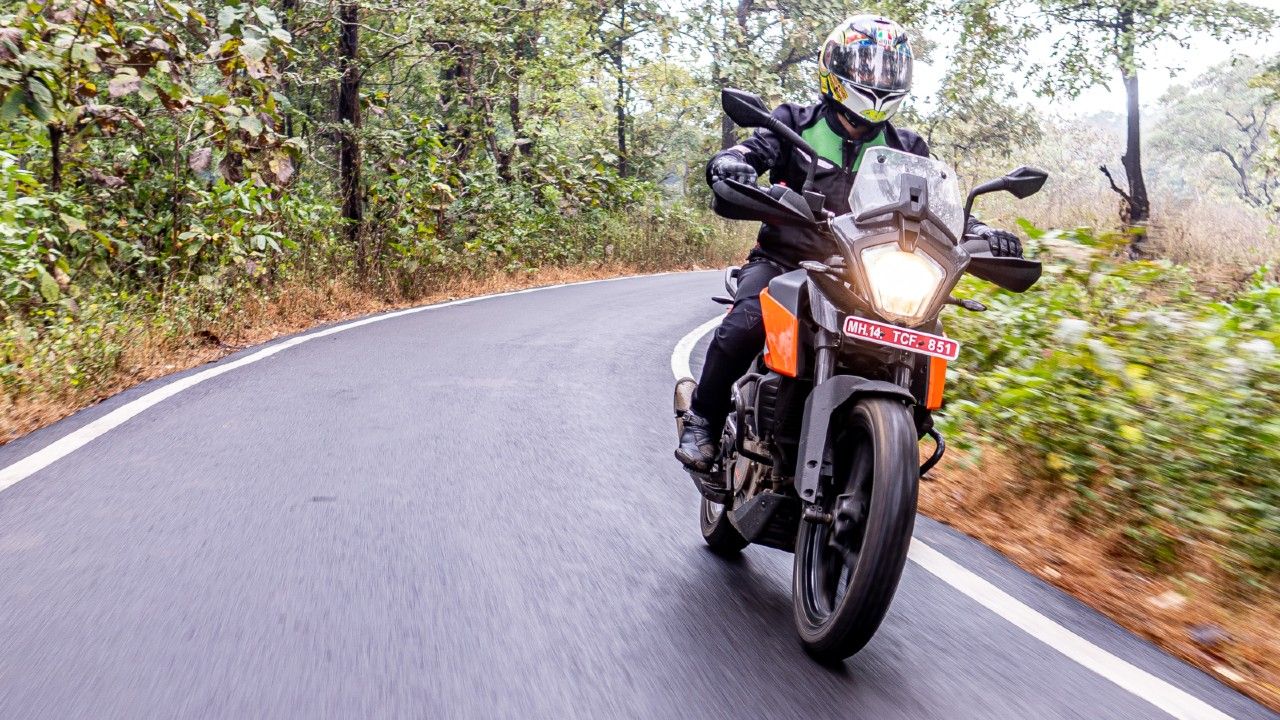 The KTM 390 Adventure isn't the easiest bikes to ride off-road, but it is a capable and fun machine nonetheless - one that secured a spot in our 'Best of 2020' mega test. Does the smaller 250 Adventure have enough to follow the suit?

Over the past few years, there’s been a lot of buzz in the adventure biking scene in India. I think motorcyclists are starting to acknowledge the fact that ‘adventure’ is a lot more easily accessible in this country than a race track. Although from a business stand-point there is still some time before this realisation reflects on the sales charts, it is a start nonetheless. And, it helps that motorcyclists now have a few options in the affordable space to choose from.

The Royal Enfield Himalayan has proven to be quite a mountain goat since its launch in 2016, and while it had a lot of teething issues at the time, they have mostly been ironed out over the years. 2019 saw the introduction of the Hero Xpulse 200 and the BMW G 310 GS at two extreme ends – the former in the entry-level category, and the latter in a more premium space. And then in January 2020, KTM brought the much-awaited 390 Adventure. 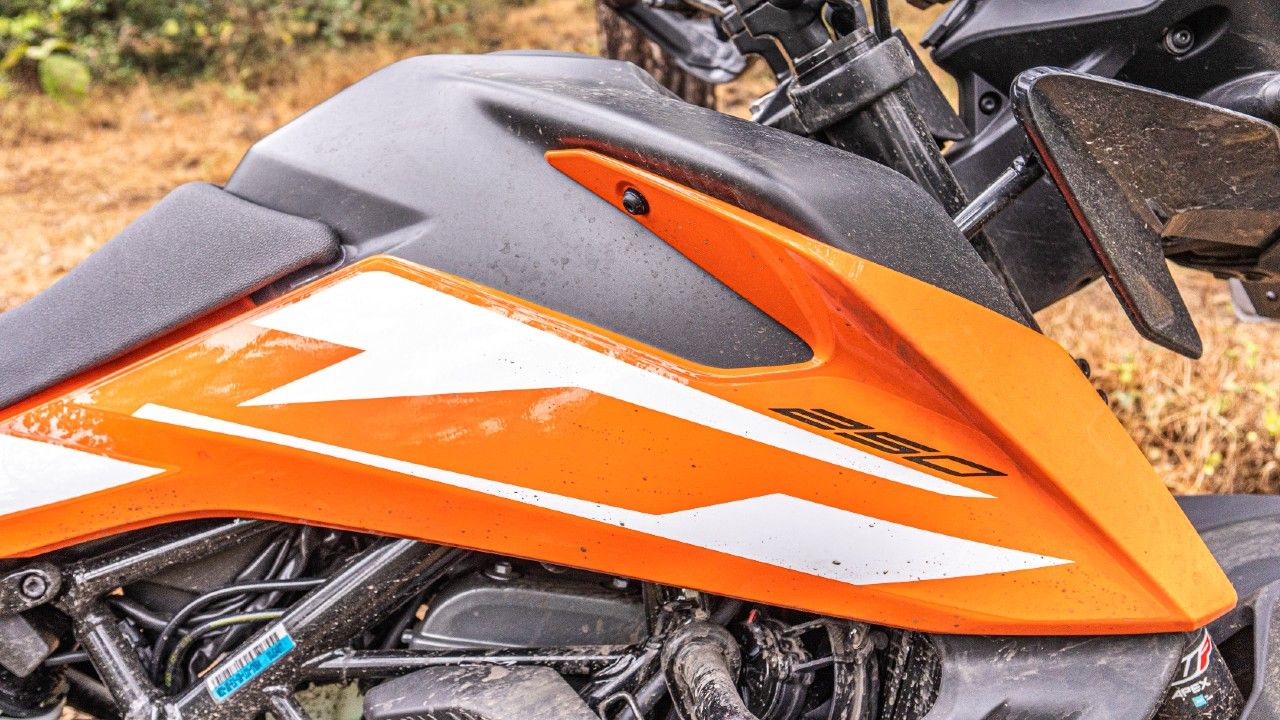 The KTM’s off-road ability has been questionable ever since its launch, but there’s no denying that it is quite a wholesome package. In fact, it even went on to secure a place in our Best of 2020 mega test last month. Now, the Austrian brand has made a its Adventure range, more accessible with the launch of the 250 Adventure. We take it for a spin to find out how it rides. 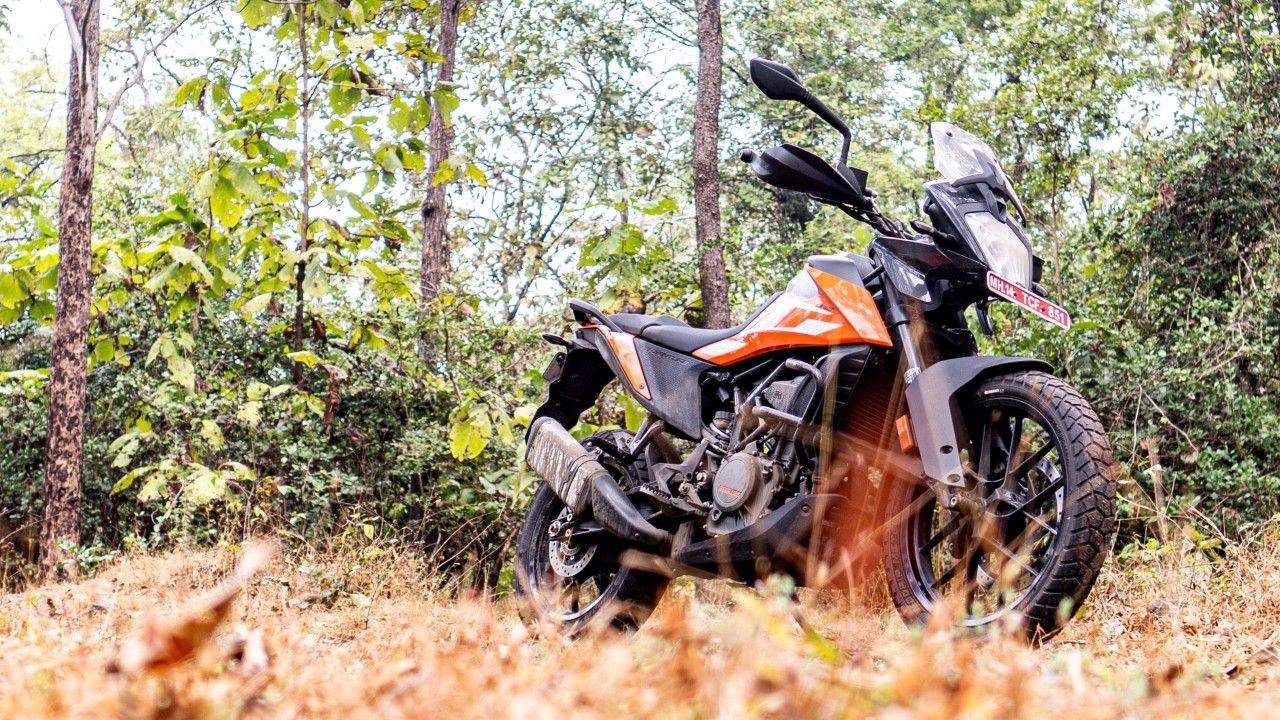 The KTM 250 Adventure may be more accessible in terms of its price – and we will get to that a bit later – but it isn’t accessible in the literal sense due to its dimensions. The quarter-litre Adventure is identical in size to its larger sibling, which means that the 855mm seat height is going to be a challenge for an average-heighted Indian even on this one. The handlebar puts you in a comfortable riding position, but it does feel a bit low while riding off-road. In terms of its other dimensions too, the 250 ADV is identical to its more powerful sibling. In fact, it even looks exactly the same with the exception of a few differences. 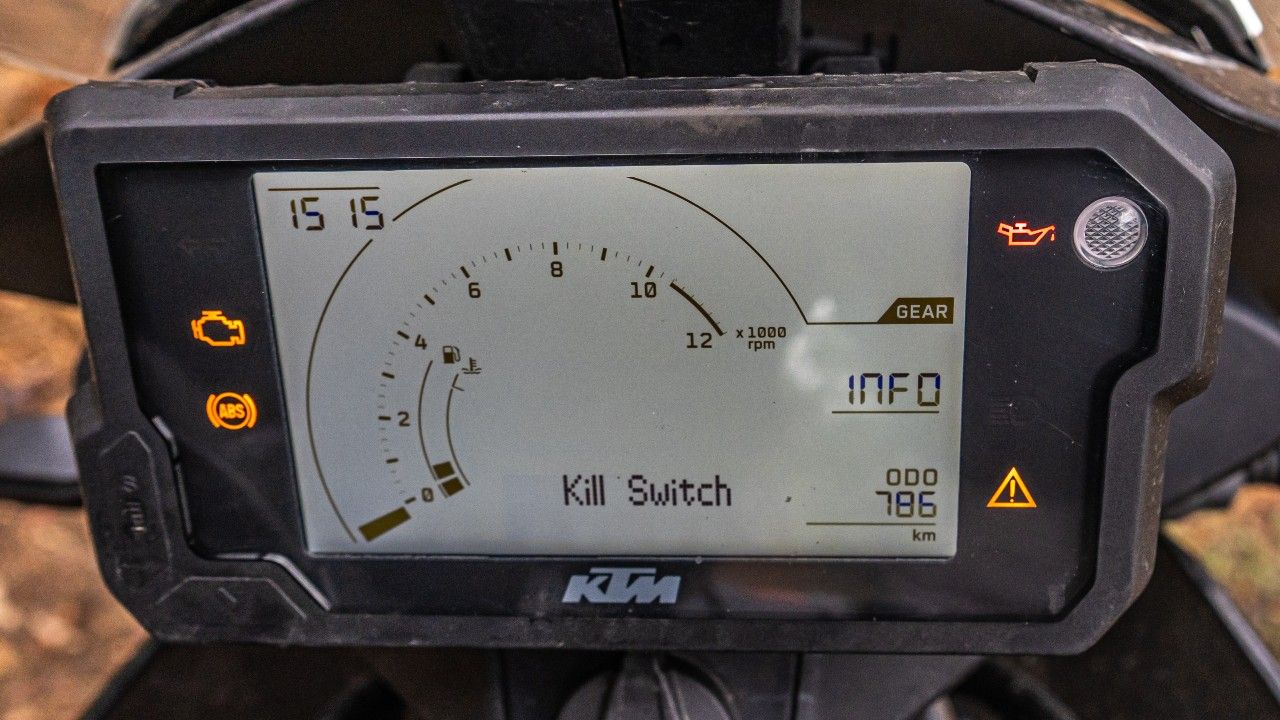 The 250 Adventure misses out on the LED headlamps and makes do with a halogen set-up with LED DRLs. In the interest of saving cost, the 250 ADV also gets MRF tyres instead of the Metzeler rubber. They are the same size though – 100/90 at the front and 130/80 at the rear. The TFT display from the 390 is absent here – the 250 Adventure makes do with an LCD display without Bluetooth connectivity and navigation. 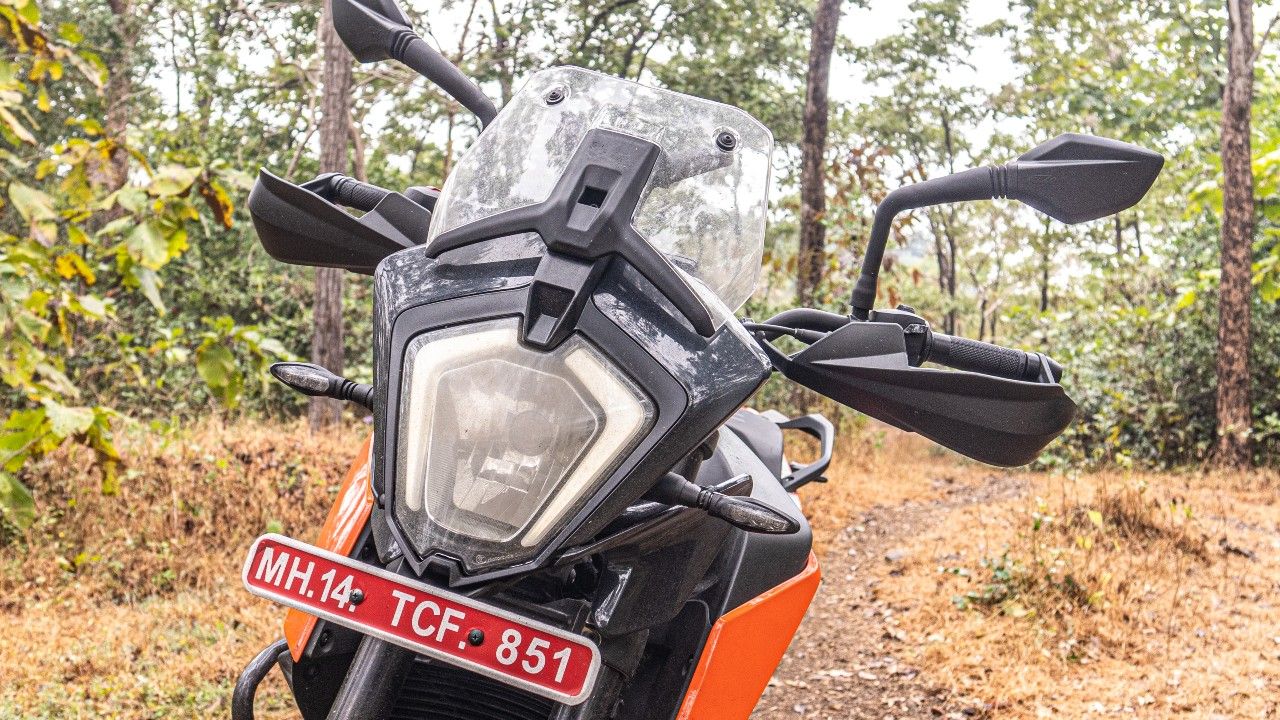 In almost every other way the 250 Adventure is identical to the 390 ADV. This one too gets the 2-step adjustable windscreen, 12v charging socket, the toothed pegs, as well as the LED taillight. It does, however, fall behind in terms of tech and miss out on the 3-axis IMU with cornering ABS and traction control. 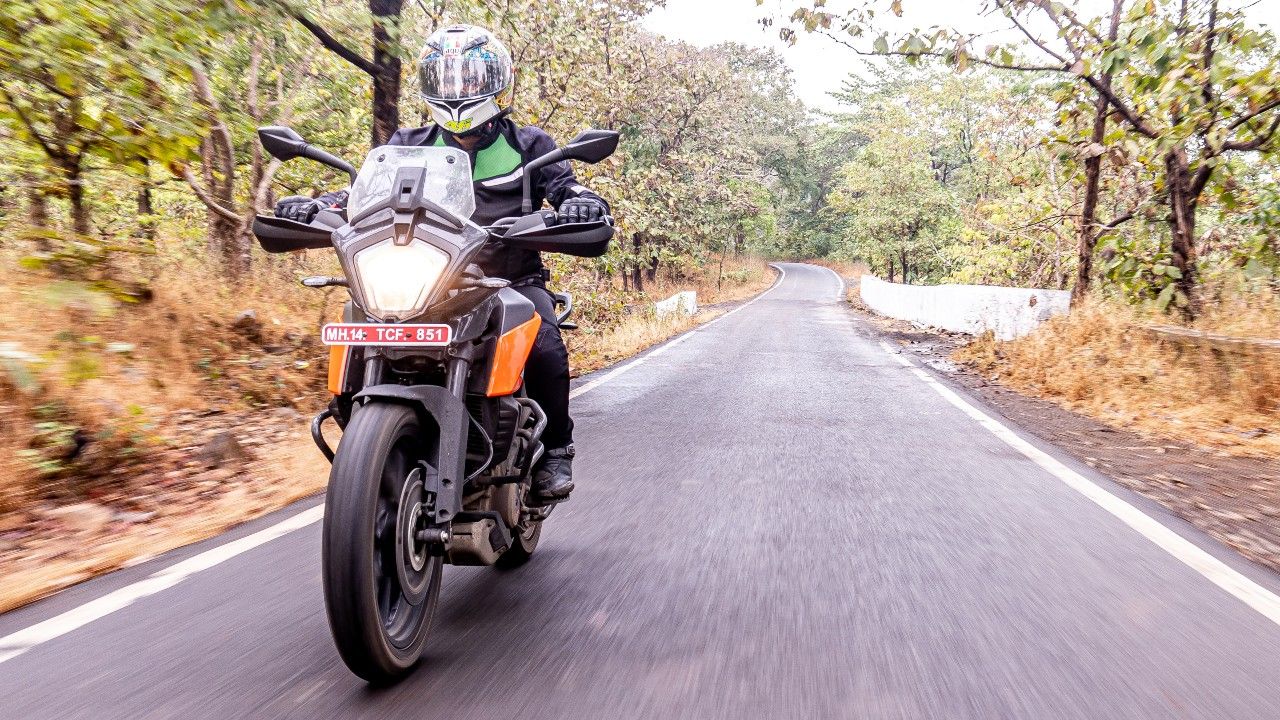 Powering the 250 Adventure is the same 248.8cc single-cylinder liquid-cooled motor that also powers the 250 Duke. In this bike too it makes 29.6bhp and 24Nm, and there’s no change in the way the engine has been tuned, nor in the final drive ratio.

There’s barely any punch lower in the rev range and it only comes into its element once you’ve crossed 4,000rpm. Once you are that mark, however, the engine packs quite some punch. It revs freely right up to its redline and delivers the performance in a rather progressive manner. In fact, the 250 ADV, just like its naked sibling feels its best in the 4,000-7,000rpm mark. Vibrations on the footpegs and the seat are prominent beyond that. Keeping that in mind, the 250 Adventure feels best at just over the 100km/h mark. Cruising at speeds higher speeds will definitely leave your hands and feet buzzing at the end of a long ride. 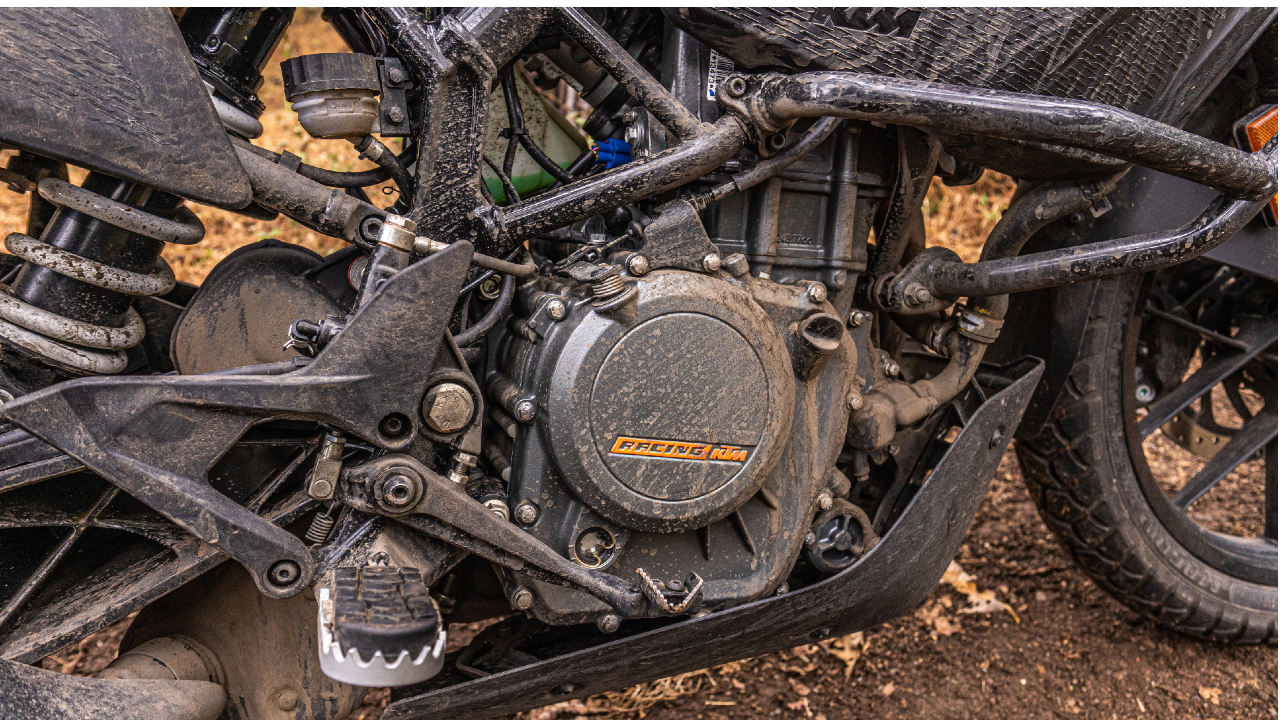 In the city, the 250 Adventure demands constant gear shifts – you have to be in the right gear at all times, otherwise, the bike feels rather uneasy. And the lack of grunt lower in the rev range gets even more prominent while riding through tight, technical and rocky terrain. While your off-road adventures won’t quite be as effortless as you’d want them to be, with lesser power on offer than the 390, the quarter-litre ADV doesn’t feel daunting. And despite the exclusion of the electronic safety net, you feel a bit optimistic about opening the throttle over the rough stuff. The 250 Adventure is fairly accessible after all!

The 6-speed transmission works well and the clutch action is light. The 6th gear is more of an overdrive which occasionally forces you to downshift to overtake, even when your speeds hover around the 70km/h mark. 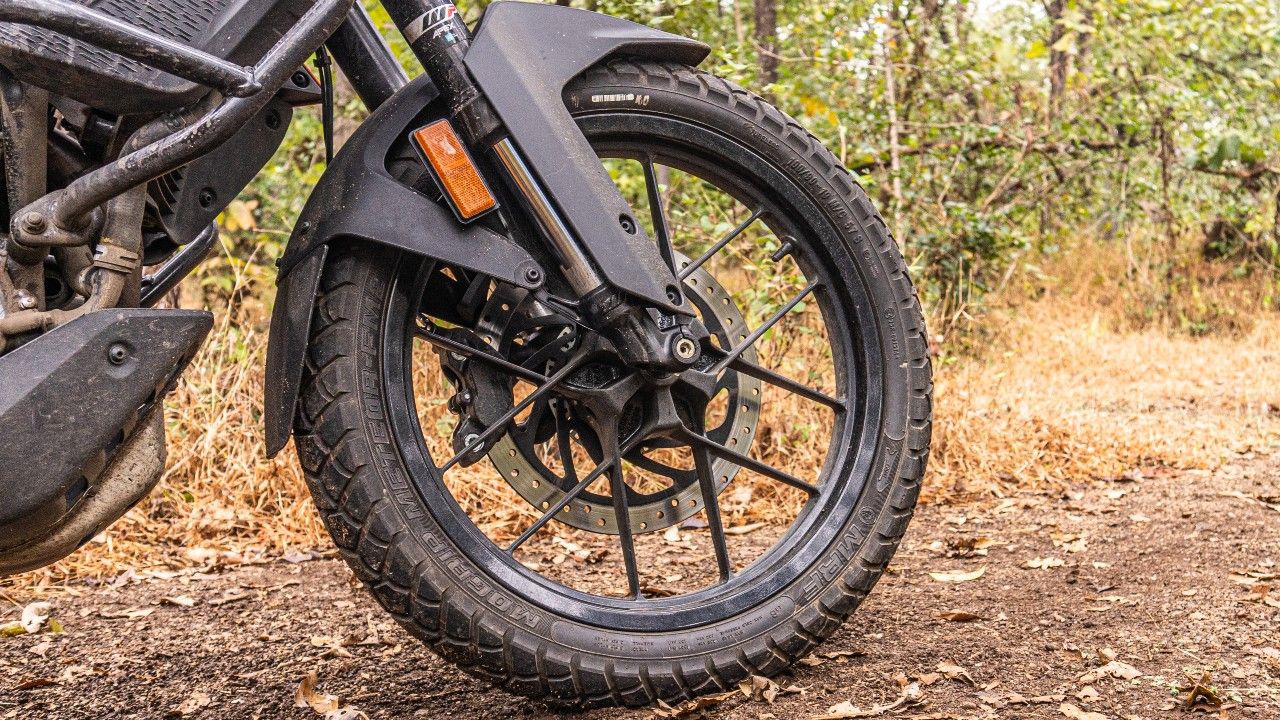 This is where things get a bit complicated for the 250 Adventure. Just like the 390, this one too sits on 43mm upside-down forks and a monoshock at the rear, with 170mm and 177mm of travel respectively. There’s a firmness to the setup that does not go unnoticed, both in a good way and bad. The 250 Adventure tips into corners with ease and feels impressively well balanced. Even with its tall riding stance, it is easy to get into a nice rhythm while riding on hilly roads and it doesn’t get nervous even if you encounter mid-corner bumps. On the flip side, however, the rigid suspension has a ripple effect on ride quality. The 250 ADV feels a tad bit too harsh when off-roading or riding over long stretches of broken roads.

Braking hardware is identical to the 390 Adventure as well – a 320mm disc at the front and a 230mm one at the rear – giving it good stopping power. The MRF Tyres performed well in the wet weather conditions we encountered, and even under braking. 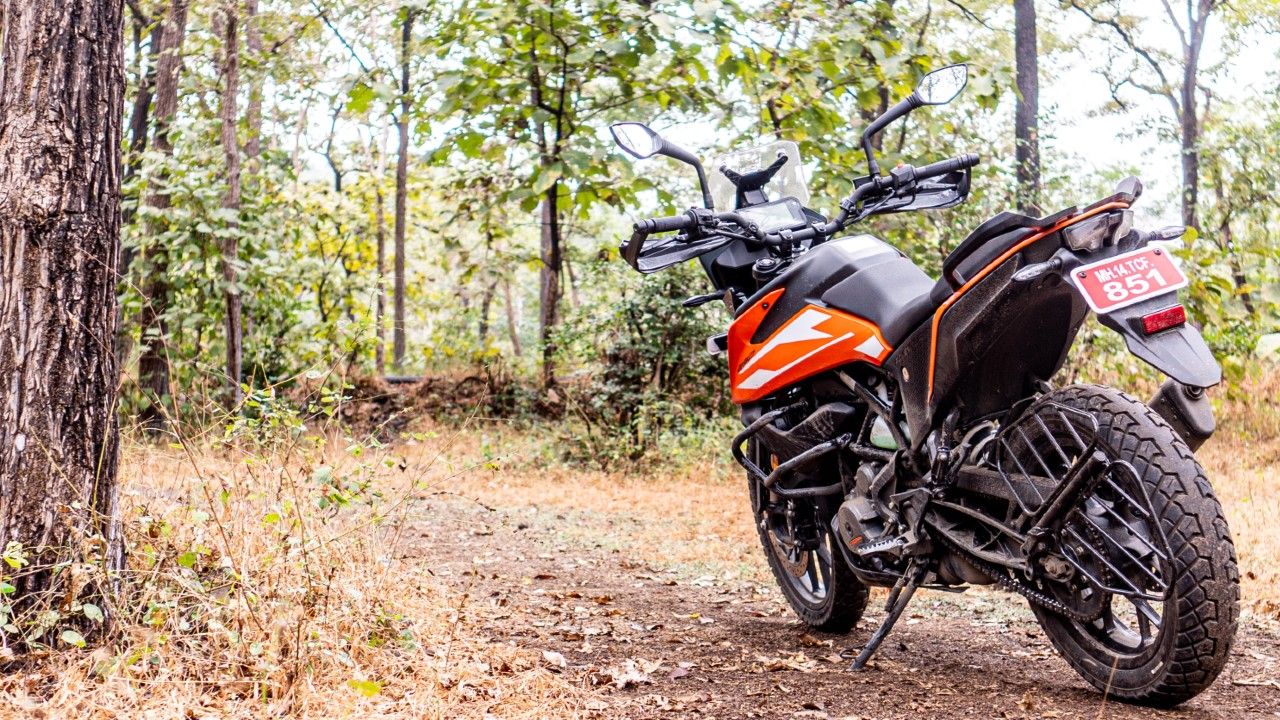 Let me set the record straight right at the onset, if you are looking for an off-road motorcycle or one that will help you learn the tricks of the trade, the 250 Adventure – just like its elder sibling – isn’t the best choice you can make. You’d be much better off putting your money on the Xpulse or the Himalayan instead. That’s not to say that the 250 Adventure is no good off-road, you can surely get your thrills out of riding some dirt trails. And it feels a lot less intimidating than the 390 ADV while doing so too.

But it is on the road and around corners that the 250 Adventure really shines bright. Its upright riding stance and the punchy mid-range makes it a comfortable and enjoyable touring machine. And despite its tall stance, it feels absolutely at home attacking corners.

If you are one of those looking to purchase the 250 Duke, you may want to consider spending the extra Rs 32,000 for a more practical offering. And for those who find the Rs 3.06 lakh price tag of the larger 390 ADV bit too far out of reach, the 250 Adventure is its spiritual lite version that is accessible and affordable. 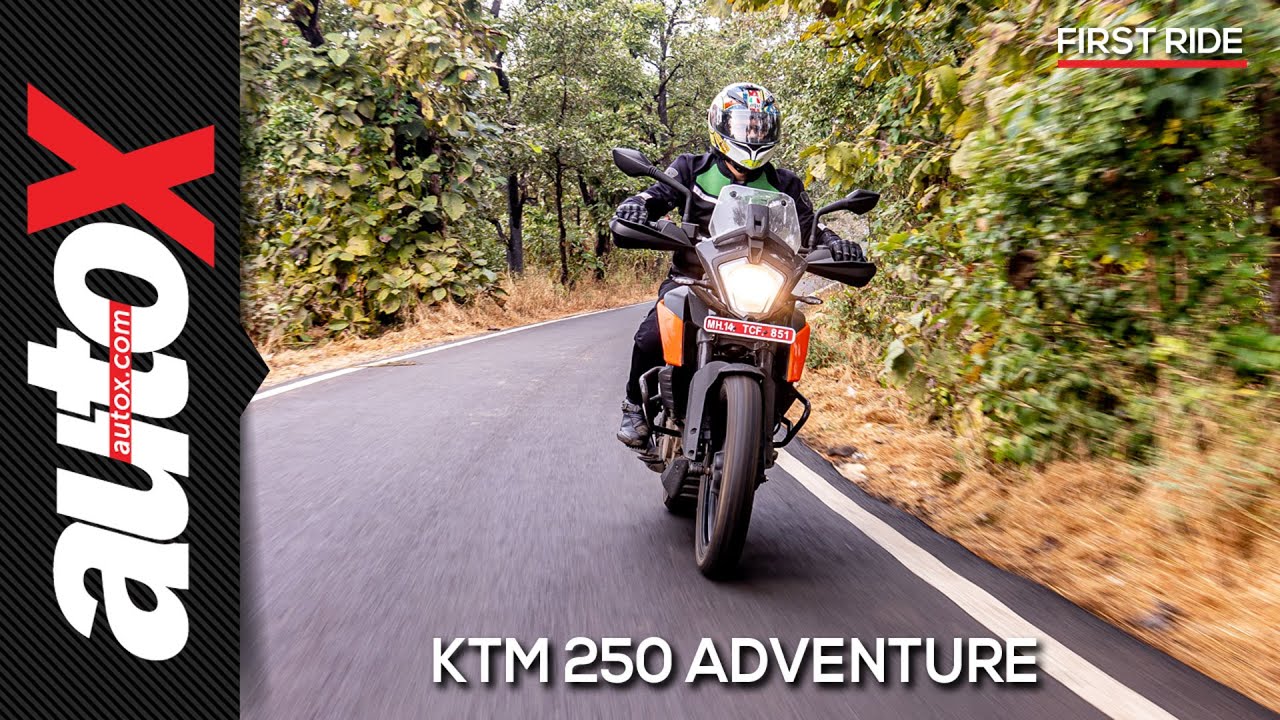 X-Factor: The 250 Adventure has all the attributes of a fun touring machine that can embark on mild off-road adventures.