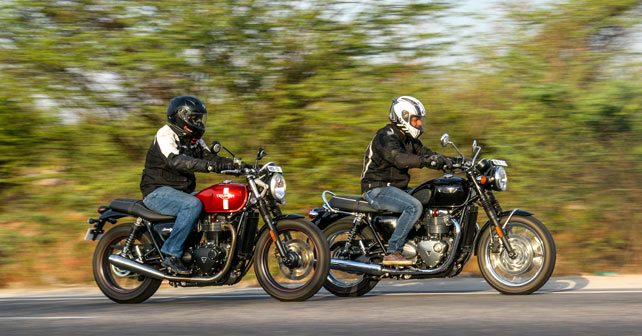 The Bonneville lineup has undergone a complete reconstruction. After riding the more diminutive of this duo in Spain last year, we finally get our hands on both the Street Twin and the more powerful T120 on the streets of the Capital.

You don’t need me to tell you that there’s a huge difference between the roads in India and in Spain. The latter has got some of the best riding roads in the world, and its cities aren’t anywhere near as congested as ours. When I rode the Triumph Street Twin in and around the lovely town of Valencia last year, I had a good ol’ time because the conditions were fantastic. However, with heavy traffic, extreme heat and pothole infested streets, the whole riding experience in India becomes completely different. But, the Bonneville has always been a phenomenal piece of machinery – and I was sure that, when we tested it in India, my opinion of the Street Twin wouldn’t change at all. And, in case you haven’t read my earlier review of the Street Twin, I absolutely loved it. 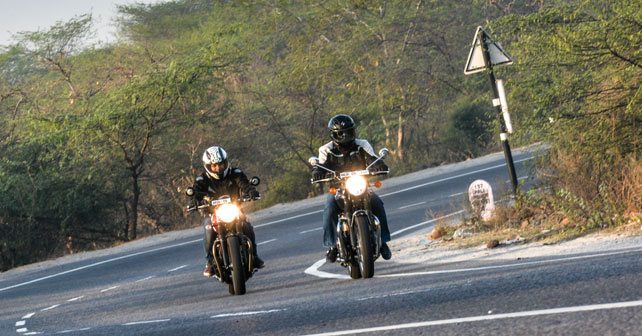 The Street Twin is the smallest of the new Bonnevilles, and it’s quite a remarkable machine. Its compact dimensions and refined engine make it a great city bike. The biggest bike in the Bonneville lineup though is the T120, and we just so happened to get our hands on this iconic model too. The T120 was first introduced in 1959 and stayed in production for 16 years – the same amount of time since the Bonneville lineup was resurrected. And now that there’s a massive influx of new technology. Triumph has refreshed the lineup, and the T100 has been replaced with the stunning new Bonneville T120. It’s a stylish and distinctive statement of Triumphs heritage, and yet it combines the modern performance of an all-new 1,200cc high torque engine with authentic styling. Plus, it’s the little details that set the new bikes apart from the previous models. 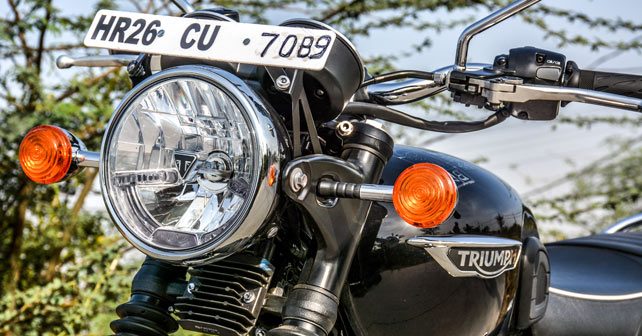 I got to ride around Delhi on both, the Street Twin and the T120 – and just like every other Triumph I’ve ridden lately, I found the overall design and performance brilliant. The new Bonnies share nothing with the previous models, and Triumph have made sure that the new line-up is better in every way possible. With that said, it still very much holds on to its heritage and retro styling. The Street Twin is compact and easily accessible for all riders. It gets a newly designed classic round headlight with a fancy LED taillight. The riding position is good, but a little on the aggressive side – and, for me, it does feel a little cramped. The T120 is a bigger machine, and it’s been carefully crafted to follow the silhouette and cues of the original Bonneville. And, like the T100, wire wheels, peashooter exhausts, and a comfortable seat will take you all the way back to the 1960s. The riding position is more spacious and definitely more comfortable. But the seats on both bikes are a little too soft, and not the best for long distance highway cruising. However, if you’ve been following the buns of steel gym routine, you needn’t worry – because both bikes are capable of covering long distances without breaking a sweat. 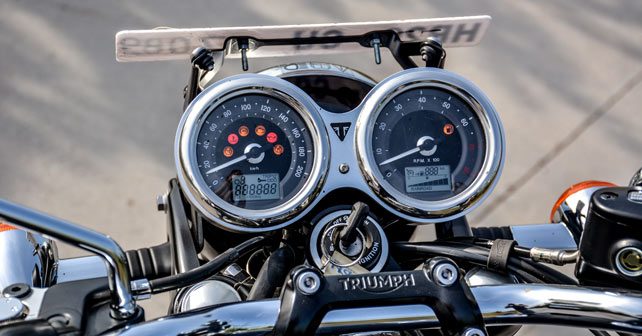 So, while Triumph has done everything right in terms of design, it’s actually the all-new engines that are the stars here. The overall refinement levels are phenomenal – they’re simply smooth like butter. The engineers have done a fantastic job with these new engines. The new 900cc liquid cooled unit has 54bhp – which is less than the previous model, but its torque rating has increased by 18 percent to 80Nm. But the engineers have focused a lot on mid-range power, and it’s here where the output has been greatly improved. Between 2,750 rpm and 4,750 rpm revs the Street Twin has 22 percent greater power than the previous model did.

For the T120, displacement is now up to 1200cc – and, again, it’s the usable torque, not top speed, which has been the focus. The engine produces 105Nm of peak torque, which is 54 percent more than the T100, and peak horsepower is up to 79bhp, which is 18 percent more. But, again, more power is available across the entire rev range. The T120 also gets a new transmission, which adds a 6th gear. 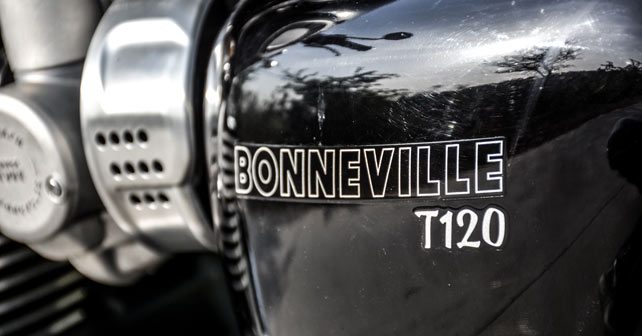 The T120 has a more subdued and more elegant riding character than the T100.The chassis is stiffer, but more composed, and with the revised front suspension the overall riding experience is smoother. On city roads it’s easy to handle, but it doesn’t like it if you take corners at high speeds – and you’ll probably scrape the low set foot pegs as well. Braking power has been improved, with twin 310mm discs and Nissin two-piston calipers – and a Nissin two-piston caliper at the rear as well. The best part, though, is that it finally comes stock with an ABS system. You can also choose between two ride modes – which don’t adjust the level of engine power, but the aggressiveness of the power delivery instead. 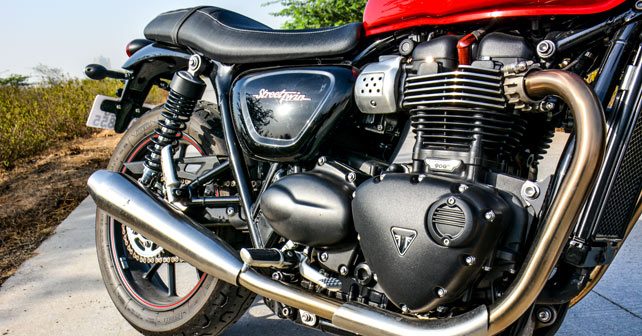 The Street Twin offers a completely different riding approach, and it’s certainly much easier to handle in the city because of its dimensions and lighter overall weight. The throttle response is nice, but it does seem like it could have been a bit more responsive for aggressive riders like myself. The new suspension setup seems to work very well, and since there’s more room for rear wheel travel, you don’t feel the brunt of bumpy roads. In fact, I feel that the Street Twin’s suspension absorbs undulations better than the T120 does. The balance of the chassis is also really good, and you can go into corners at higher speeds than on the T120. 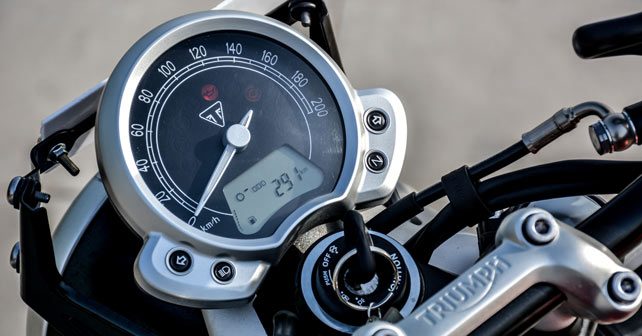 No matter what you fancy though, the new Bonneville lineup is a modern iteration worthy of its namesake. The new engines and the levels of refinement are astonishing, and the improved handling is impressive. The addition of ABS is highly appreciated too. The Street Twin is more agile and looks sportier, but the T120 retains its true classic identity and is both powerful and comfortable. Both are brilliant in fact, but if neither is sporty enough, I urge you to wait for the new Thruxton – which will be launched in India very soon. The bump in price of the new Bonnies might be not be easy for old customers to digest, but once they ride the new models I’m sure they’ll be convinced that it’s worth it – even for Indian road conditions. 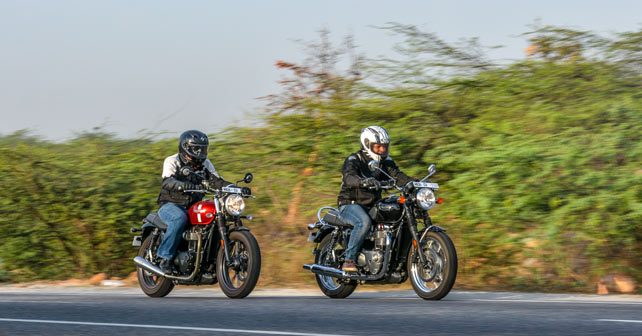 X-Factor:  It’s already an icon, and the new engine is the smoothest we have seen on a modern classic.

X-Factor: Compact and retro, it’s the most usable city bike in the 900cc segment