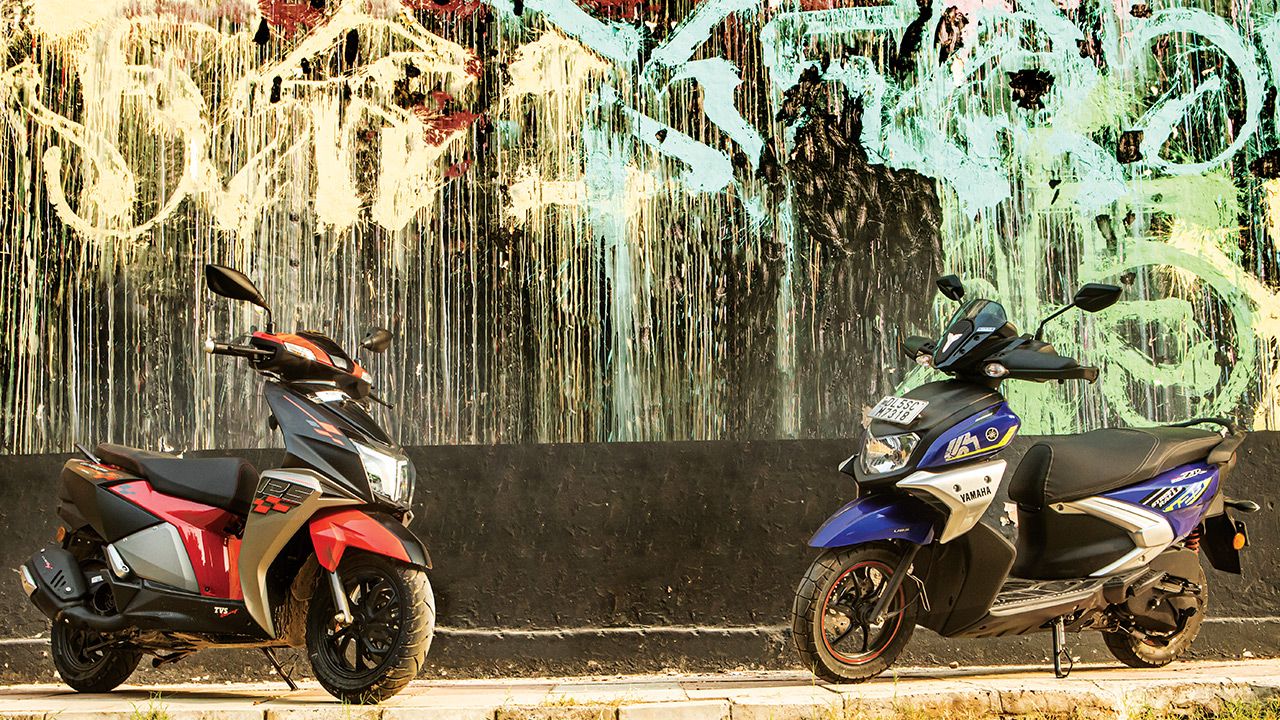 Looking for a peppy 125cc scooter that does it all? We pitch the Yamaha Ray ZR 125 against the TVS NTorq to find out which one is the better all-rounder. The verdict may surprise you!

If you’re a youngster or a college-goer, or plan to be one once this Covid mess is over, chances are that you may be interested in a sporty 125cc scooter. That’s because a set of wheels of this kind offers the right amount of performance, comfort, and style. Not to mention the fact that it’s also not too heavy on the pocket.

Now, since its launch in 2018, the TVS NTorq has been our favourite scooter in the 125cc segment. However, its reign is now being threatened by Yamaha’s all-new Ray ZR 125. There’s no doubt that both these scooters are quite sporty looking, but which one is the better all-rounder? It’s time to find out. 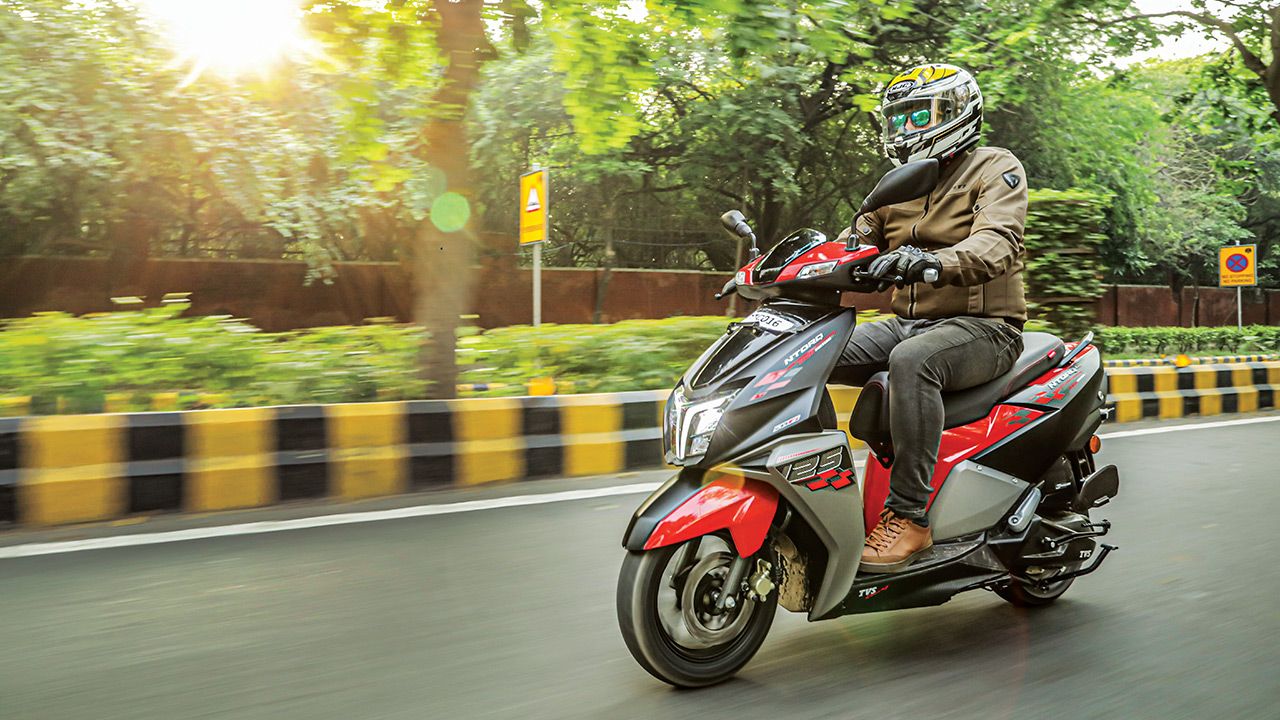 Style it out
Let’s start with the Ray ZR. It’s quite a funky-looking scooter. Yamaha designers have gone to town on making sure that it appeals to the young crowd. Really, it’s a very stylish and sporty scooter. The front apron has a contrasting gloss and matte paint finish, and there’s a smoky visor with a ‘T’ LED position lamp sitting right below it. The one you see here is the Street Rally version, which gets brushed knuckle guards, block pattern tyres, and stripes on the wheels. It definitely looks a bit overdone, but it has a unique character, and youngsters wanting to stand out will like its polarising aesthetics.

The NTorq cuts a familiar figure, but that’s not to say that it looks outdated. The BS6 version of the scooter gets a couple of cosmetic updates. Also, there’s now a Race Edition version, which has chequered flags splashed all over its bodywork. What’s more, it now gets full LED headlamps. Compared to the Ray ZR though, it feels a little cramped, owing to its low handlebar and small floorboard. 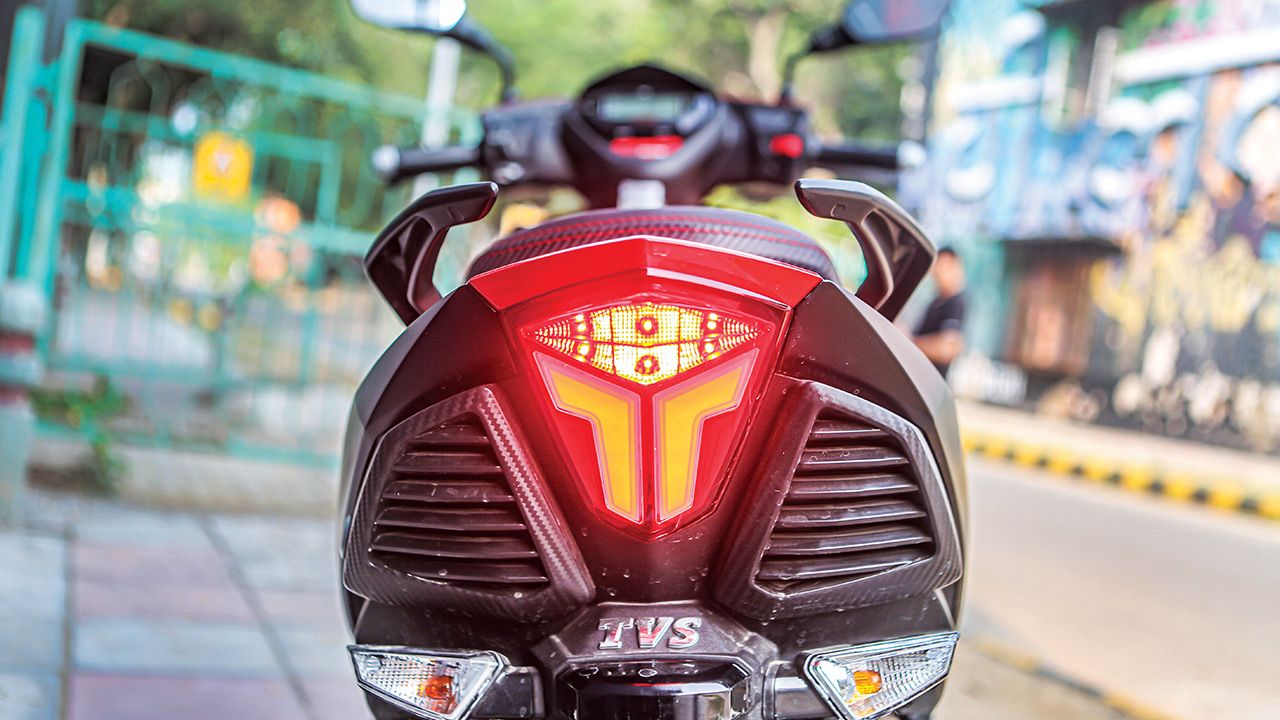 Goodies list
In terms of features, the NTorq has an upper hand. You get a large digital instrument cluster, which packs a lot of details and comes with smartphone connectivity and turn-by-turn navigation. The NTorq also gets a USB charger, which is tucked under the seat. Plus, the fuel lid is on the outside, which is more convenient.

The Yamaha’s instrument cluster is plain and simple in comparison to that of the NTorq – it features just a speedo, an odometer, a single trip meter, and an instant fuel consumption monitor. The headlamps are halogen, and the fuel lid is under the seat. Both scooters’ under-seat storage is more or less similar – neither of them can fit a full-face helmet. The TVS now has a bigger fuel tank of 5.8 litres, while the Yamaha’s fuel tank capacity is 5.2 litres. The Ray ZR claws back some points with the side-stand engine-cut off function. The scooter is also equipped with start-stop tech. 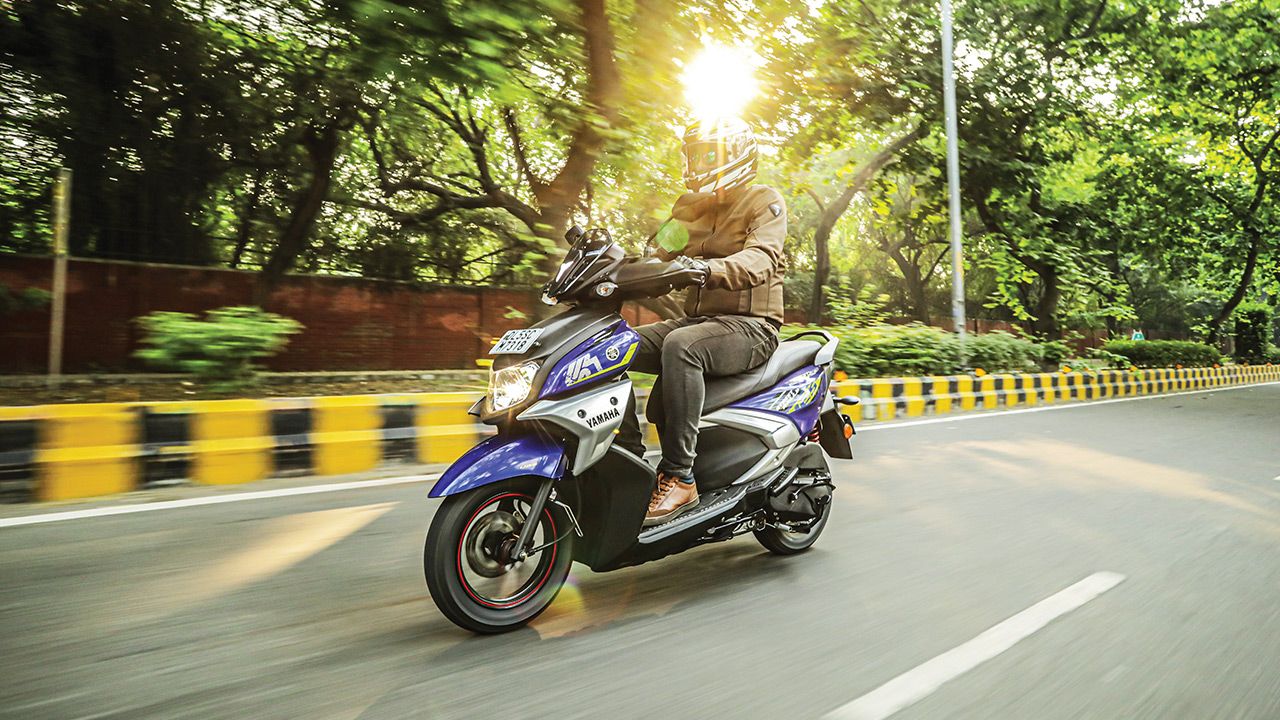 Power-to-weight
Both scooters feature 125cc single-cylinder engines, but it’s the NTorq that has more power and torque, as it delivers 9bhp and 10.5Nm of torque as compared to Ray ZR’s 8bhp and 9.7Nm. That’s not the full story though. The Ray ZR is much lighter than the NTorq – it tips the scales at 99kgs, whereas the NTorq weighs in at 118kgs, which is 2kgs more than its BS4 version. Thanks to the weight difference, it’s the Yamaha that feels peppier, as it accelerates quicker. It’s only after 60km/h that the deficit in power comes into play, as the Yamaha struggles to pick up the pace towards the top end. Plus, the TVS has a stronger torque spread and can hit 95km/h on the speedo quite effortlessly. The NTorq’s deep and throaty exhaust note also makes it feel sportier than it really is.

The Ray ZR can also hit 95km/h on the speedo, but it takes time getting there. In terms of refinement, both scooters are evenly matched, but the NTorq’s throttle response is slightly crisper. The Yamaha, though, is more fuel-efficient – we managed to get around 50 to 55 kilometres to a litre, while the TVS returned 45 – 50km/l in similar riding conditions.

Because of its light weight, the Ray ZR is nimbler and more fun to ride as well. The ride quality is a bit harsh though, thanks to the smaller 10-inch rear wheel and an overall firm setup. The TVS has a better ride-and-handling balance, and while the ride isn’t exactly plush, it absorbs bumps in a more mature manner. That said, the soft seat takes a toll on your lower back during a long ride. In this regard, the Ray ZR’s wide and firm seat make it more comfortable on longer commutes.

Both scooters come with a front disc and rear drum brake setup, along with a combi braking system. The TVS’ disc is larger and braking performance is strong, but in terms of feel and feedback, the Yamaha fares better. 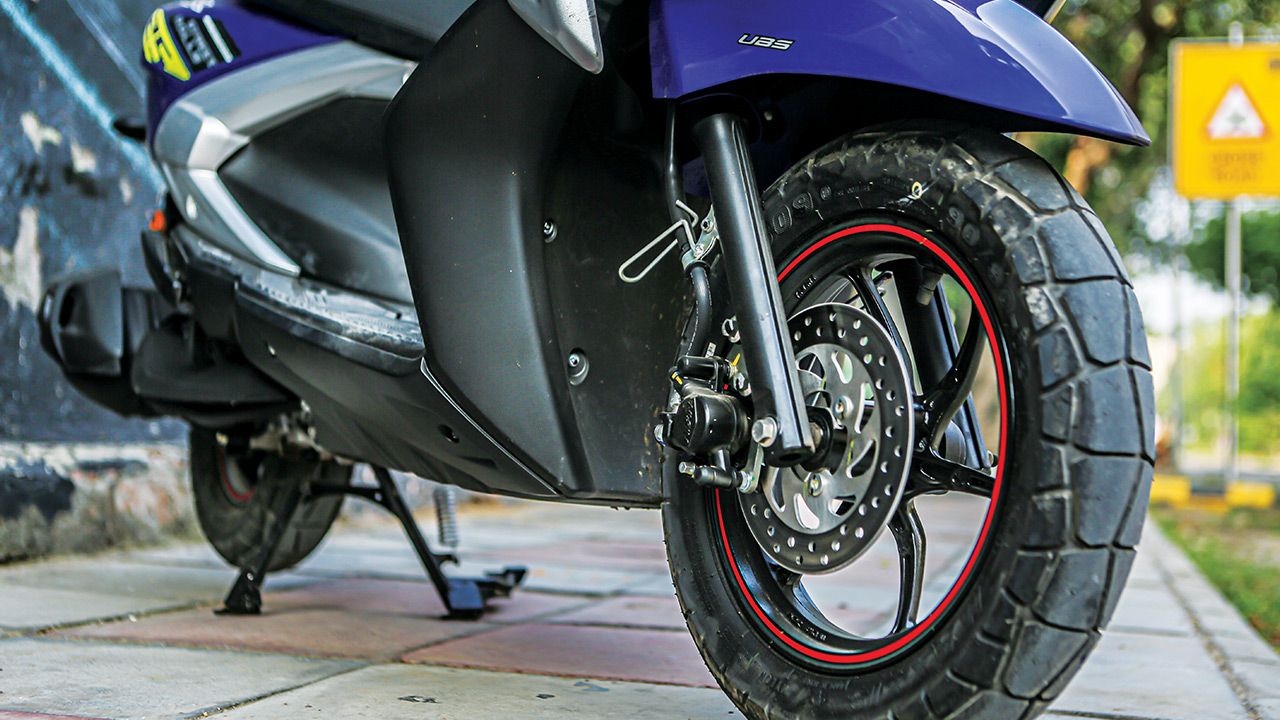 Verdict
If we talk about the basics, it’s the Ray ZR that gets it right as a sporty scooter – it’s more fun to ride and has quicker acceleration and loud styling. Also, it’s lightweight, wieldy, and returns better fuel efficiency. The NTorq, on the other hand, is a more rounded package that does everything very well, if not spectacularly well. Plus, for just a thousand rupees more than the Ray ZR, it packs in better kit. So, the winner of the comparison is the NTorq, but by only a very slim margin.

However, if you ask me about the one that I’d like to buy between the two, well, my honest answer would be neither! You see, the BS6 upgrade and high GST on two-wheelers have skyrocketed the prices of these scooters, and they can’t really be called affordable anymore. My other problem is that, with their exorbitant prices, conventional scooters are now getting scarily close to products like the Ather 450. Now, I’m not entirely convinced that electric propulsion is the ultimate saviour of the planet, as many claim it to be, but if I were a youngster looking for a daily runabout within the city, I’d definitely want to try the future, if not fully embrace it…

X-factor: As a sporty 125cc scooter, the NTorq covers all the bases, and then some.

X-factor: It’s got style, performance, comfort, and is exciting to ride. 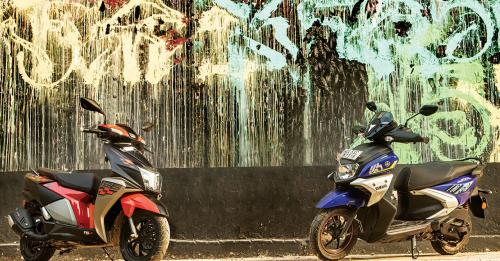