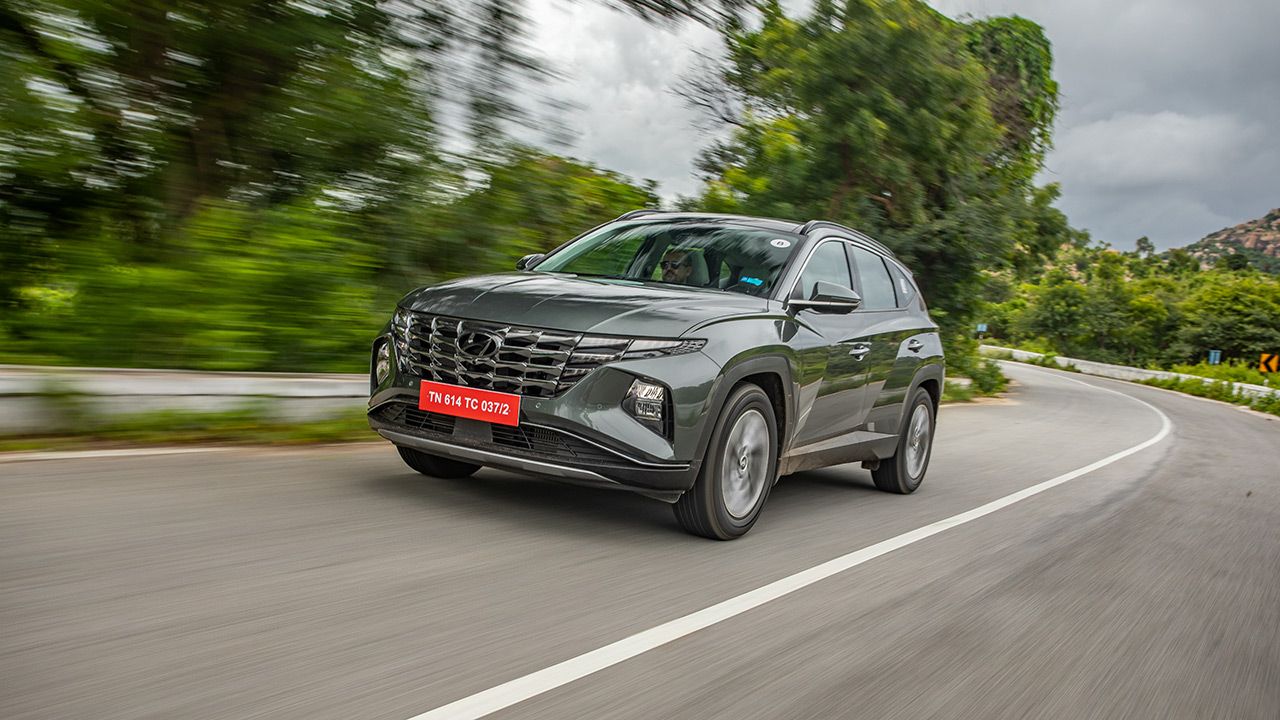 The Tucson is an SUV I’m intimately familiar with, having driven the last generation car extensively over the past couple of years. And it did offer a compelling package, especially if you were looking for a premium SUV without the need of a third row of seats. With the fourth generation of the Tucson though, Hyundai is looking to rachet up its appeal with a brand-new design – inside and out – more variants and a better overall package. 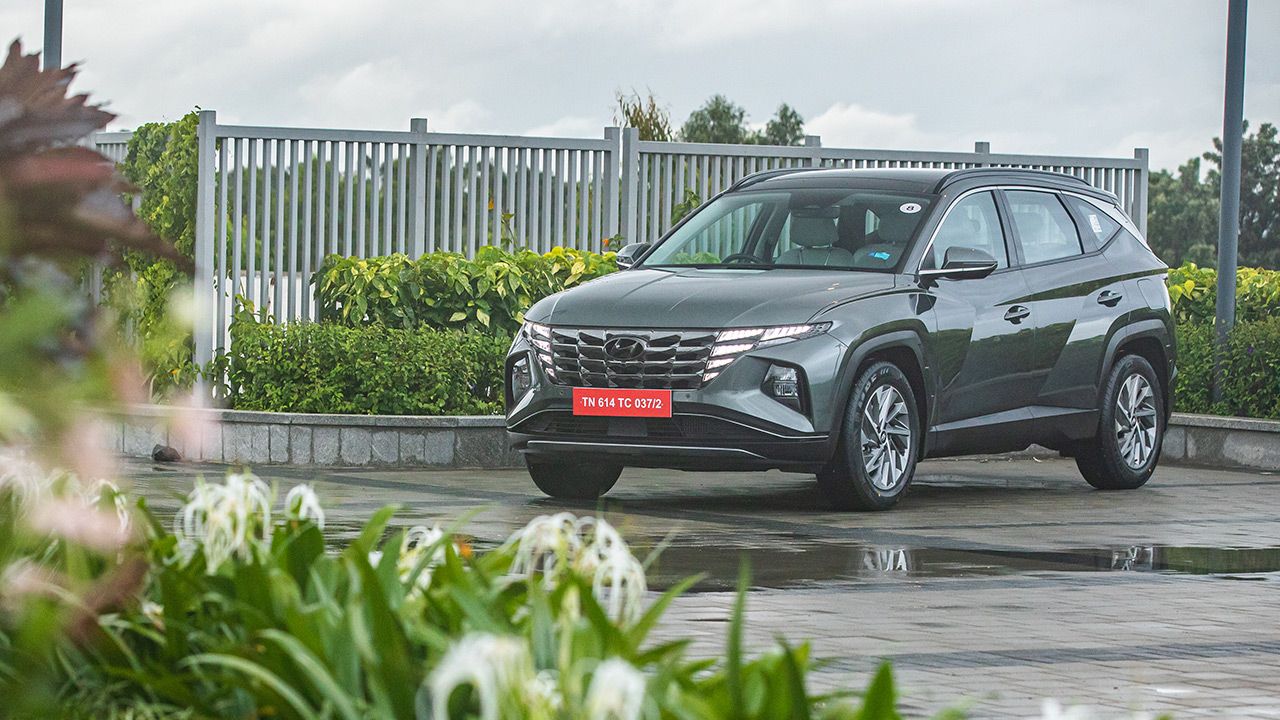 The earlier generations of the Tucson stuck to the conventional design rules and set the theme for the Hyundai SUV lineup. However, with the new Tucson, Hyundai’s designers are changing the convention with an edgy design language that looks very unique. Right from the unique five-layered headlight design to the bold front grille finished in black chrome, the Tucson looks like nothing else on the road. The design gets edgier on the sides, with both front and rear fenders featuring a bulging design and sharp lines, while the full-width taillight is a nice touch. With its 18-inch multi-spoke wheels, the Tucson features a balanced stance but with its edgy design touches, it remains a design that will polarize opinion – you will either love it or hate it. I think, in the right colour, it’s a pretty striking design that will turn heads on the road. 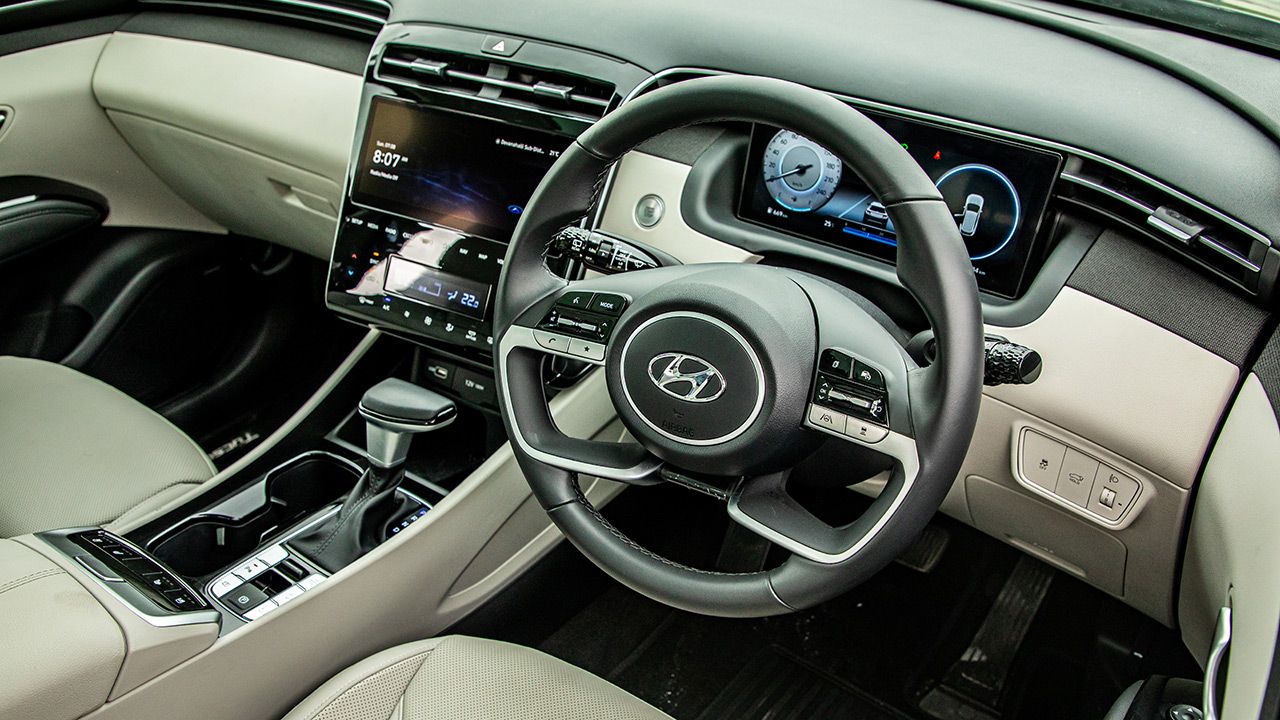 However, the real attraction of the Tucson is in the interior which is also a massive upgrade over the last-generation car. Our top-spec diesel test car featured a two-tone interior, which gives the interior a very pleasing appeal. This Tucson is based on the long-wheelbase version of the platform – internationally there’s also a short-wheelbase version available – and offers acres of interior room. This means that fitting five adults inside the Tucson is a breeze, and all seats in the SUV feel spacious, with the vast panoramic roof offering a rather open feel to the interior. 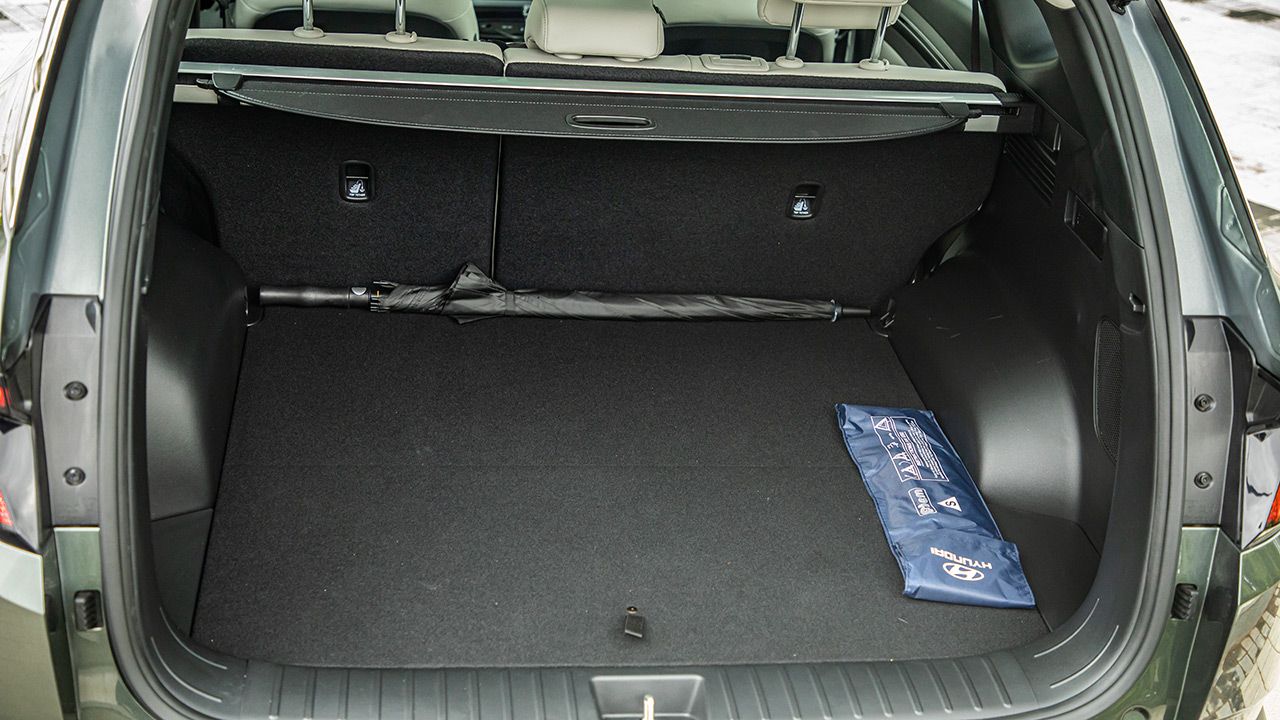 The feature count has also gone up in the Tucson, with the SUV now featuring segment-leading standard equipment including LED head and tail lamps, ADAS functions including forward-collision mitigation and lane keep assist along with features such as a Bose sound system, large 10.25-inch multimedia touchscreen and a digital instrument cluster. Thankfully, unlike the earlier generation SUV, the Tucson also features ventilated and heated seats, as well as electric seat adjustment for both front seats.

Out on the Road

The Tucson is one of the few SUVs in its segment that offers both petrol and diesel engine options. Our test car was the 2.0-litre diesel with 184bhp and 416Nm of torque paired to an eight-speed automatic gearbox. The diesel is offered in both front-wheel and all-wheel drive variants, and our test features all-wheel drive. Out on the road, the first thing I noticed about the Tucson was how much the driving feel had improved compared to the older car. Gone was the soft suspension which would make the ride wallowy and bouncy and now the Tucson has a stiff and taut feel to it. However, this is not at the price of ride quality as the Tucson deals with bad roads effectively, and still remains excellent body control at high speeds. 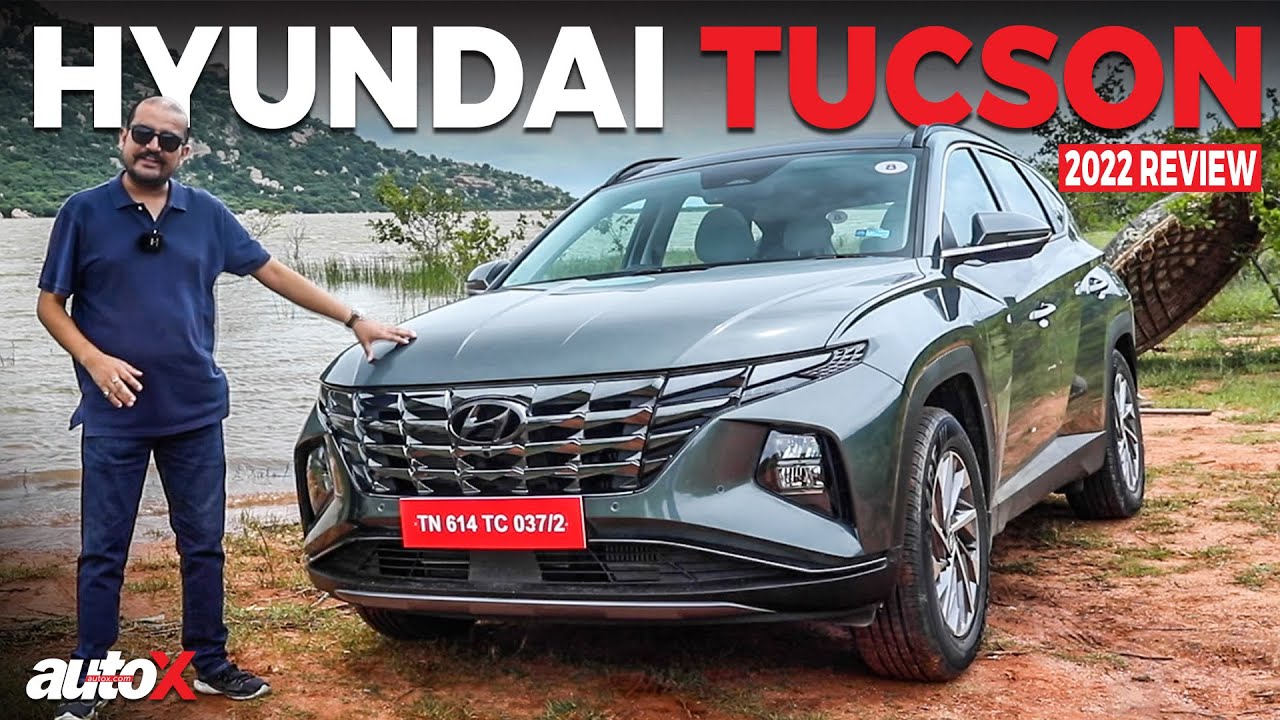 The engine remains a delight, as it was before, and the instant torque of the diesel really pulls the Tucson to an astonishing pace without any stress. The excellent torque also helps maintain double-digit fuel efficiency with ease which really brings down the daily running costs. Another feather to the suspension is the high-speed stability, which means that sitting at three-digit speeds for long periods is a pretty easy job. The steering has also seen vast improvement from the earlier generation Tucson, but it still remains a weak point of the SUV. While it might be better than before, it still doesn’t feel communicative enough, and particularly in Sport mode has a massive heft to it which feels unnatural and unpleasant. If there is an area for improvement in the Tucson, the steering is a definite one.

Despite its generous standard equipment, there are a few bits missing in the Tucson that are glaring. For instance, while the Tucson offers Apple CarPlay and Android Auto, it is wired only, whereas with the pricing of the Tucson it should have been wireless. Two, the Tucson also misses out on steering-mounted gearshift paddles, which should’ve also been standard. Overall, though, with its space, generous standard equipment and option of diesel and petrol engines, the Tucson offers a compelling package. The fact that it feels luxurious inside and offers pretty good driving appeal only adds to the overall package. If there could be a fly in the ointment, it would have to be the edgy looks, which could be a turn-off for some. For me though, I can’t wait to get one as a long-term test car and take it out on a long drive to discover more of its abilities. 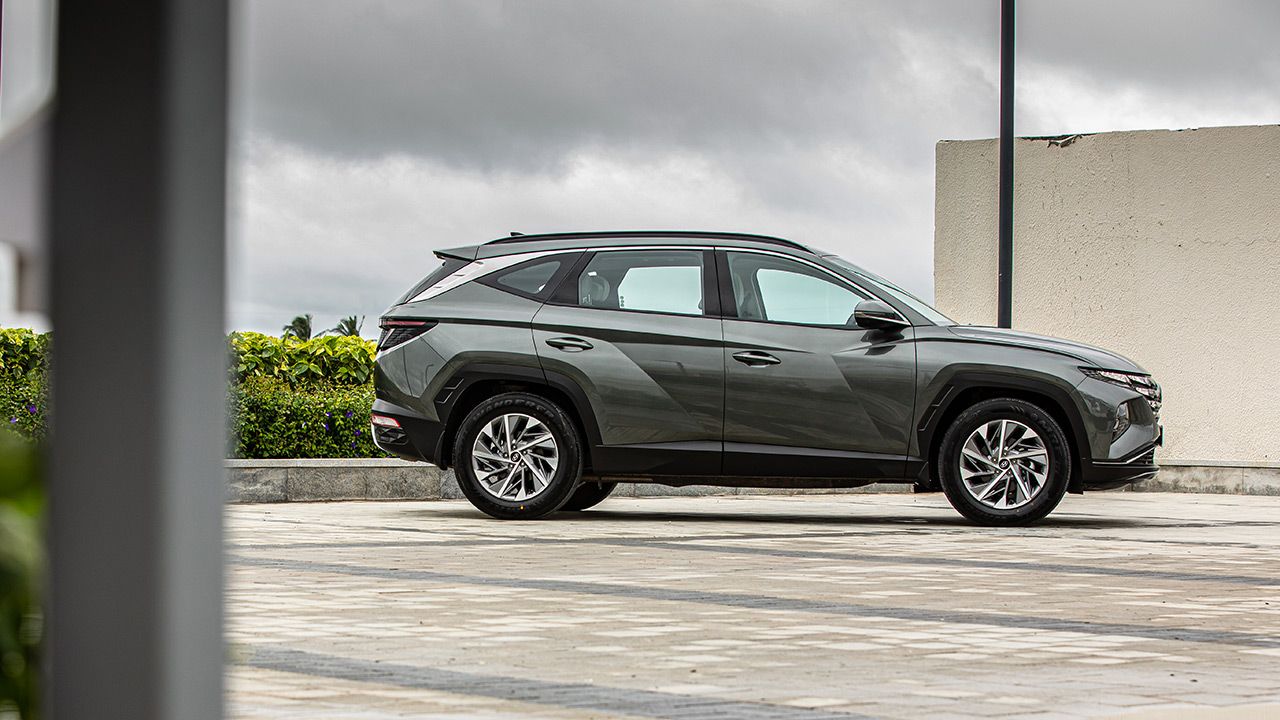 X-Factor: With its new suspension, design and quality, the Tucson offers a compelling premium SUV package. 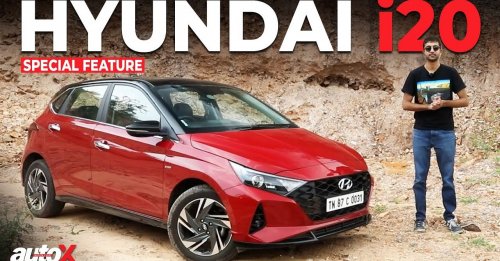