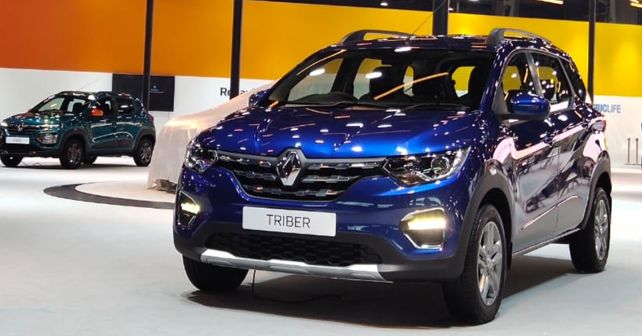 Renault showcased the Triber AMT at the 2020 Auto Expo and announced that it will be launched in the weeks to come. Will come with the same BS-VI compliant 1.0-litre petrol motor as the rest of the variants

Renault brought in the Triber in August last year but at the time the car only went on sale with a manual transmission variant. At the Auto Expo 2020, the company has now showcased the Triber AMT and it is likely to be launched in the weeks to come.

Just like the manual transmission variant, the AMT to comes with a 1.0-litre naturally aspirated petrol heart that develops 71 horses and 96Nm. The transmission is the same 5-speed AMT unit that works on the Kwid. The Triber, however, replaces the rotary knob with a traditional stick shifter.

On the design front, the Triber AMT looks exactly like the manual transmission variant with the exception of the Easy-R badging on the boot lid. When the Triber AMT gets launched in a few weeks’ time it is likely to be roughly Rs 30,000 more than the manual transmission variant. The Triber AMT will go on sale in funky dual-tone paint scheme as well. Among the most affordable MPV on sale today, the Triber has tasted reasonable success on the sales charts so far. The launch of the AMT version is likely to drive the sales a bit further. The only other competitor to the Triber is the Datsun Go+, which comes with a CVT transmission.

Aside from the Triber AMT, Renault also gave us a closer look of the Zoe EV. It comes with a 52kWh battery pack that that gives it a driving range of nearly 400km according to the WLTP cycle. As of now, there is no official news about Renault bringing the Zoe EV to Indian shores.