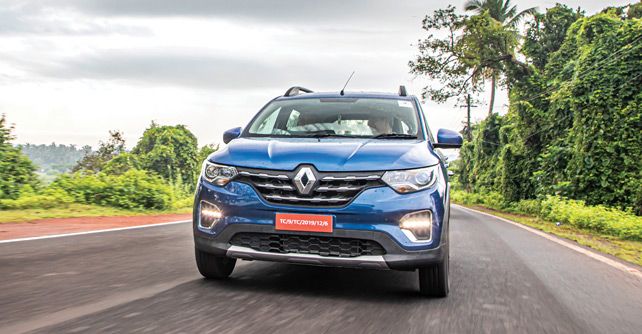 Renault wants to succeed in a space that has proven to be very elusive so far – the sub-4-meter MPV segment. And to do so, it has many things going in its favour – a well-balanced design, practicality, and a fantastic price. But is it all enough?

Competing in the Indian market can, at times, be brutal – as most automobile companies will tell you. But if you get the product right, the success – and the sales numbers that come with it – can be very rewarding. Just ask Renault! They’ve seen many sides of the Indian market over the years – mild acceptance, indifference, and even outright rejection. But they’ve also had fantastic successes with two of their products – the Duster and the Kwid.

Keeping that, and the explosive potential of the Indian automotive market, in mind, Renault is back to explore a segment that has proven itself to be one of the toughest to crack for all manufacturers – the sub-4-metre space. 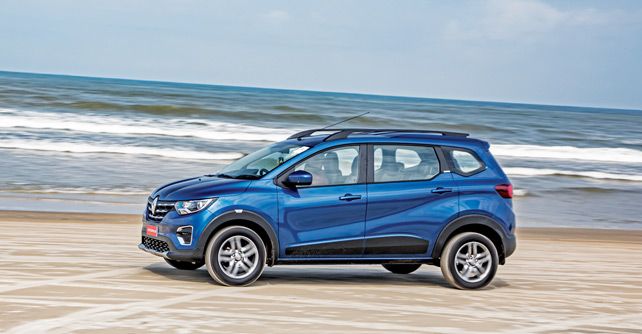 Universal oddity
You see, in their barely illuminated corridors of wisdom, one fine day, the all-prevailing regulatory powers of our country decided that they would reduce taxation on cars sold in India based on their length. So, they decided that anything under 4-metres in length would be taxed significantly lower than something over 4-metres in length. A desperate attempt to over-compensate… for inadequate tax collection, of course!

But, then, given the resourcefulness of automotive companies and the never-ending search of Indian customers for a better deal, it really did bring about a unique segment that is exclusive to India – and one that commands insane sales numbers. Renault has caught a glimpse of these numbers with the Kwid, and now they want the Triber to follow suit. 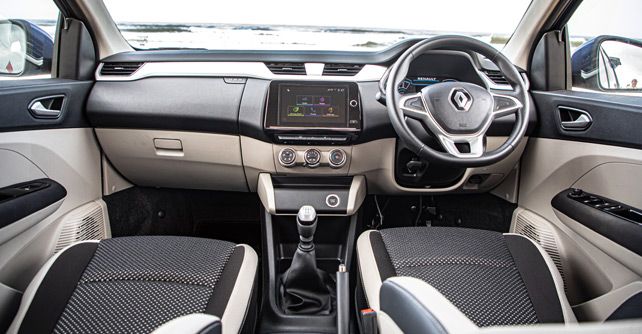 Space warrior
So, with this new offering, Renault has attempted to create a sub-4-metre automobile with three usable rows of seating. But how usable? That’s the question, isn’t it? Well, we’ll come to that. But, first, let’s talk about the design.

After all, the French have been known to be at the cutting-edge of design for centuries now, and the Triber continues this fine tradition. Despite it’s under 4-metre length, the Triber actually has a very well-balanced design. And because it’s a clean-sheet design, instead of an attempt to evolve an existing product, it appears to be longer than it actually is.

What this means is that it looks balanced – a result of various design touches, such as the large 15-inch wheels, plastic cladding, and near-perfect proportions.

The interior of the Triber is also quite distinctive. The first thing that you notice when you get in the car is just how spacious it feels. The front two seats, with their well-measured foam density and size, feel very comfortable and supportive, while the second row has ample headroom and legroom, even for passengers over six-feet tall. 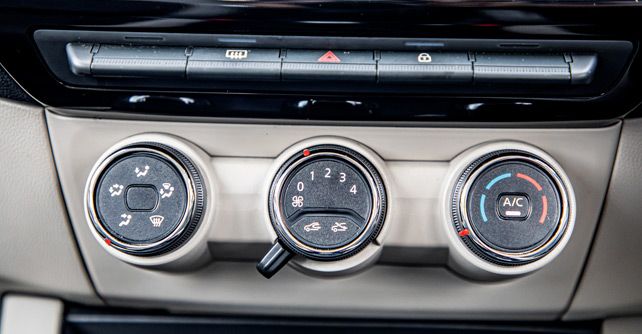 The quality of plastics and other surfaces on the Triber feels quite good, especially considering its price. Add to that toys like an 8-inch touchscreen multimedia display, an all-digital instrument console, keyless entry, start-stop switch, and there’s no denying that the Triber comes across as well equipped.

One detail that disappoints here, though, is the touchscreen mounting angle, which makes the screen too dark at times. The interface, processing speed and touch sensitivity of the screen are fantastic though.

There are two things that stand out. One, the fact that both second and third rows of seats get their own a/c vents, fan controller, and evaporator unit to increase the effectiveness of the cooling. Two, there is a cooled utility box next to the handbrake, where you can store water or cold drinks.

Another interesting touch is the standard fitment of dual-front airbags on all versions, with the top trim getting four airbags as standard. 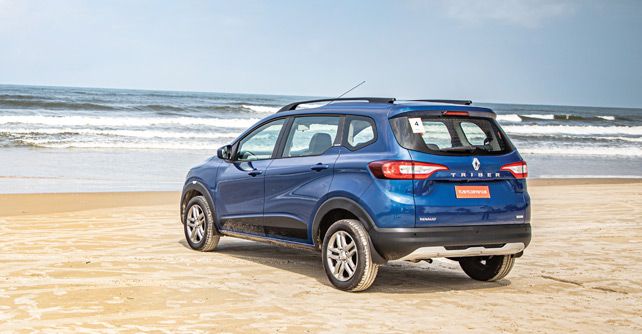 Getting a move on
Based on what Renault calls a brand-new platform, the first impression of the Triber out on the road is one that conveys excellent engineering. From the time you close the door, it never ceases to amaze you with how well sorted this product is, especially the way it handles broken roads.

A lot of people were concerned that the 1.0-litre three-pot petrol engine would feel a bit underpowered. But, with its 71bhp and 96Nm, the Triber moves quite well. The engine is a derivative of the one used in the Clio hatchback in Europe, but, for the Triber, it’s been tuned for a lot more thrust in the bottom and mid-range. Sure, at high revs the thrashy nature of the three-cylinder becomes evident, but, even under load, the engine does the job in urban conditions. 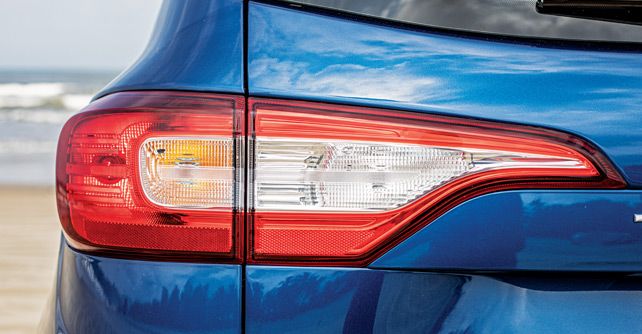 The sole gearbox option, as of now, is a 5-speed manual. The shift quality is uncertain and needs more work. But, paired with the torquey engine, the Triber gives you no reason to complain in city conditions. Sure, if you go faster than 100km/h on our highways, especially with a heavy load, the Triber will feel painfully slow. But, at this price and value proposition, it’s an expected compromise.

What also helps the performance here is the low 945kg weight of the Triber. In terms of drive quality, there are two things that are remarkable – one, the steering seems to have a decent amount of feel, and, more importantly, like virtually all other Renault products, the Triber also has great ride quality and handles broken roads with ease.

Fitting in
Now, the big question is this – how does the Triber fare against other products of the sub-4-meter segment in terms of practicality and space? Well, here the Triber has an ace up its sleeve – its sliding second row. You see, with the second row set all the way back, even an adult over six-feet tall will have no problem with ample head and legroom. But, in this case, the third row becomes quite a squeeze.

But, slide the second row forward a bit, and the Triber actually has enough room for two six-footers to sit one behind the other – just about! Headroom is not a problem, but, of course, the best you can do is accommodate two full-size adults in the third row. 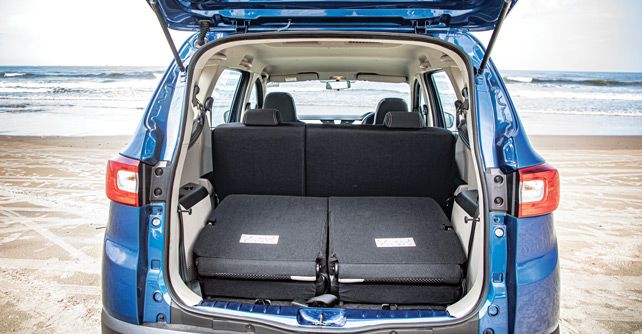 Of course, with the third row up, the boot becomes virtually unusable. But the fact is that this is a truly usable seven seater. And if you do have a lot of luggage to haul, you can remove the third row of seats altogether. Taking out the seats is a breeze, and so is modifying the second row, which means that you can customise different seating and load carrying arrangements depending on your requirement.

Overall, the Triber, with its balanced design, sorted dynamics, and practicality, is a solid package for the budget-minded customer. With a price tag of under ₹5 lakhs, the Triber could well change the rules of the game. 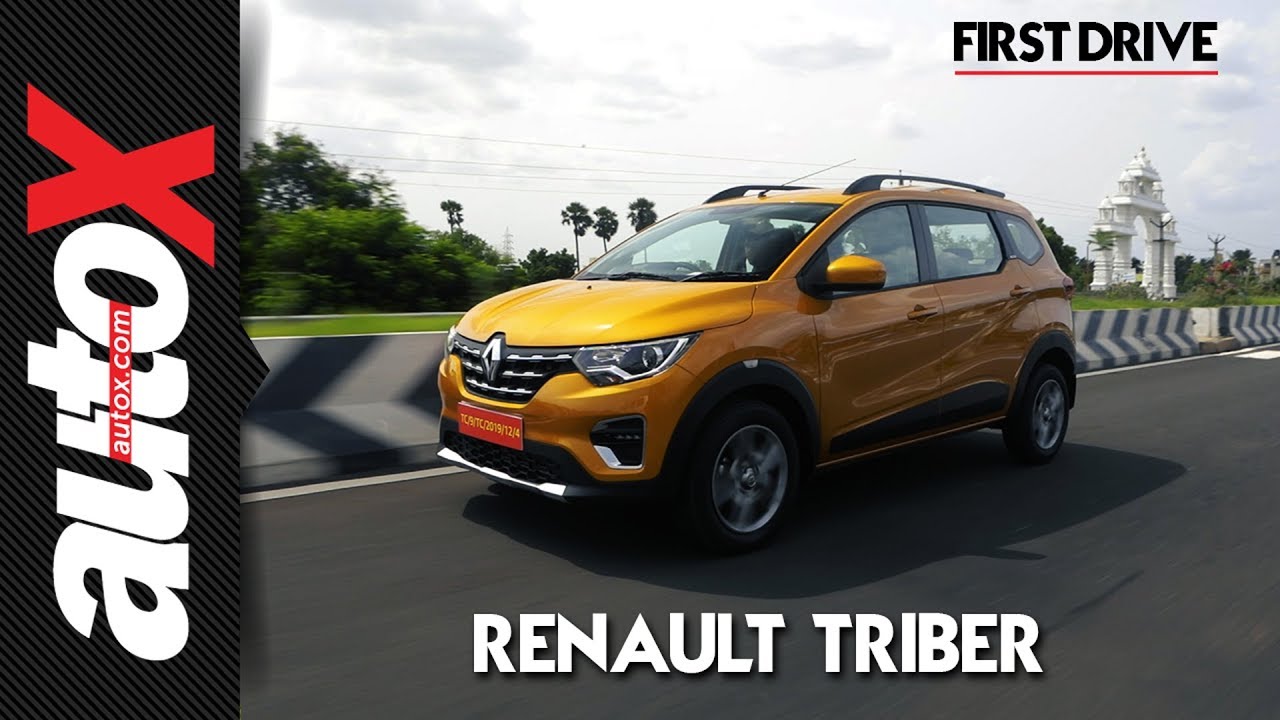 X-factor: With its combination of price, value, space, design, and decent driving appeal, the Triber is a great people mover for those on a budget.