Goodbye To Potholes: The Future Of New Suspension 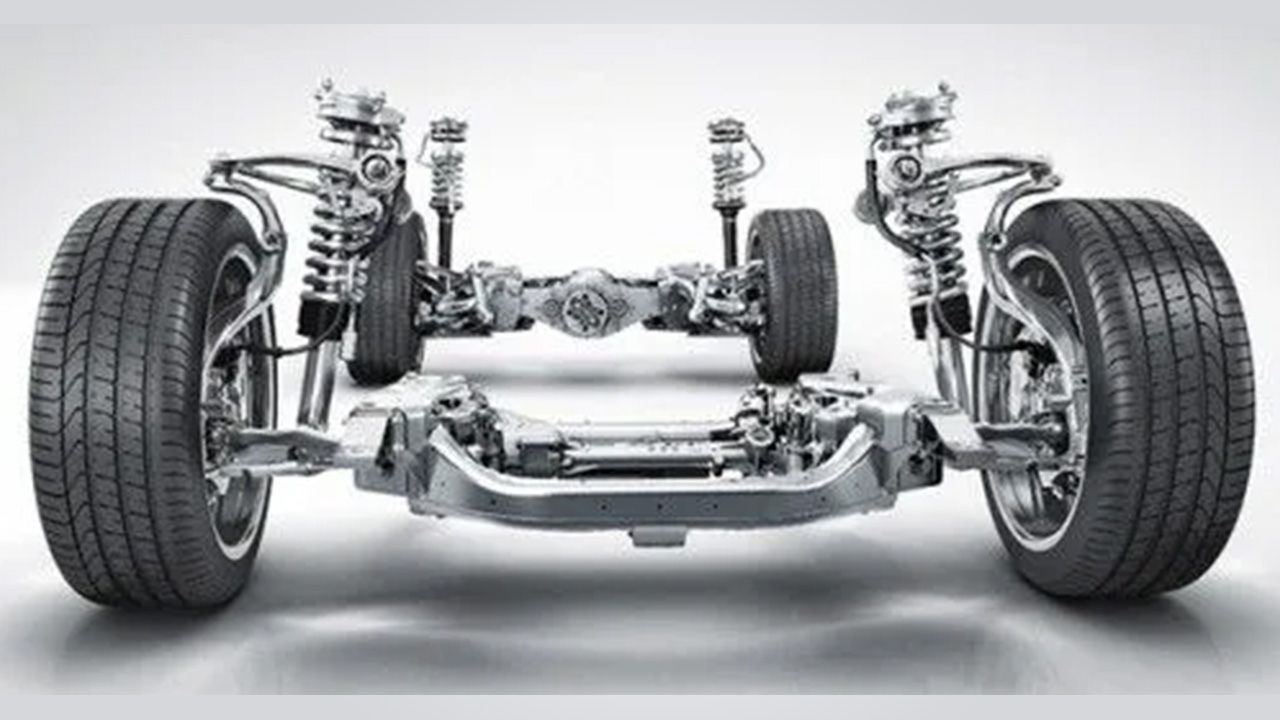 Two cameras identify dips and bumps, and predispose the suspension to absorb them. This way, the springs and shock absorbers actively take on the road.

To know the future is quite an advantage – you can foresee events instead of suffering them, or attempting to avert them at the last second. This is as true in the everyday world as it is on the road. This is why prevention has become the new frontier in automotive safety – so much so that we’re headed towards a future interchange of data between cars in motion and the urban infrastructure they move in. This will allow drivers to cast an eye far ahead, ‘around the corner,’ where dangers beyond the human eye reside. If, however, we limit ourselves to considering a much more limited area of vision (just in front of the car), then we can already benefit from stunning developments by using sensors, ultrasounds, radars, and tele-cameras, capable of identifying what’s happening around the vehicle. These are the systems that maintain a safe distance between your vehicle and one running ahead of it, or brake automatically if there’s a risk of hitting another vehicle or a pedestrian.

Cameras with street vision
We’ve written about these often, and we’ve tested many of these devices in our test centre. Obviously, once these sensors are at our disposal, they can start to fulfil evermore ample and useful functions. This is what Mercedes has done. For the first time ever, the new S-Class uses two cameras that keep track of the driving conditions and of the driver’s behaviour. This relays information about the road surface in front of the car to the suspension units. By so doing, the electronics are able to immediately and independently manage the hydraulic suspension system at all four corners of the vehicle – Mercedes calls this ABC (Active Body Control). This way, the spring and the damper rates are regulated optimally, an instant before the tyre hits a pothole, a depression, or cobblestones. The name of the device is apt – Magic Body Control, optional for now on those versions of the S-Class equipped with V8 engines. The standard versions feature the already refined Airmatic system, with electronically controlled pneumatic springs and shock absorbers.

In need of light
The two tele-cameras in front of the rear view mirror scan the road surface for a distance up to 15 metres in front of the car. The transmission of these images and the consequent adaption of the suspension occurs almost instantly, and this allows the Magic Body Control to be kept active up to a speed of 130km/h, which corresponds to 36 meters per second. Obviously, being a system based on optical camera information, it can only work during the day and with good visibility, definitely not in the fog, in the pouring rain, or in the snow. In these cases, the system goes back to the basic ABC configuration, able and fast in reacting to the perils of the road, guaranteeing optimal comfort without threatening the driving dynamics – but incapable of intervening ahead of time to prepare the springs and shock absorbers to better absorb depressions, bumps, and potholes. Certainly, the street vision and the related software wouldn’t be able to do anything unless combined with an electronically controlled suspension. You need, at the very least, shock absorbers capable of modifying, in real time, their cushioning effect. But these are components that are now offered on demand, even on widely common models like the Volkswagen Golf – another example of such technology making its way down the automotive food chain.

Metal isn’t everything
The front end (seen here) and the rear of the S-Class with active ABC suspension. The metallic springs play a secondary role – its behaviour is dictated by electronic and hydraulic sensors. 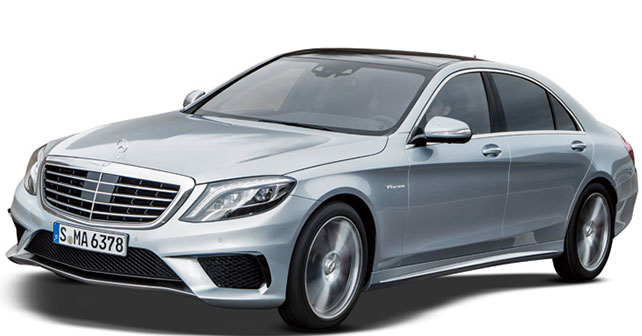 There are two essential ingredients of the Magic Body Control, introduced for the first time by Mercedes on the S-Class. First of all, there are two cameras behind the windshield – their task is to identify the irregularities of the road surface, and transmit this information map to the active ABC suspension units. At this point, the hydraulic aspect comes into play, summoned to regulate the spring and damper rates at each corner in order to prepare it to react optimally to the approaching road type. 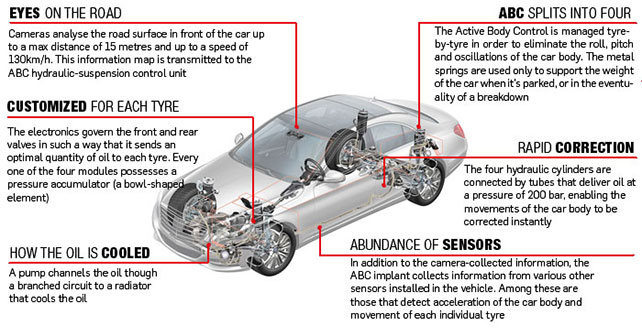 Air Springs
THAT REVOLUTIONARY SOLUTION BORN IN THE 50’S 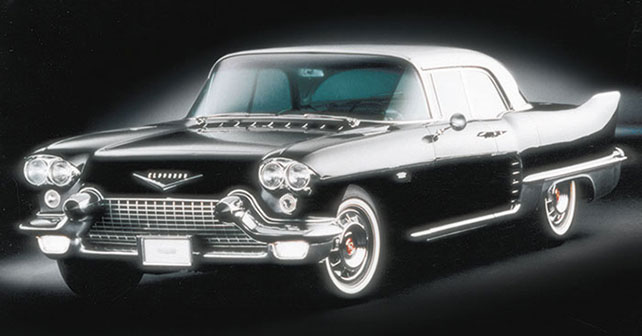 The choice of metal springs and shock absorbers has always constituted a compromise between the opposing needs of safety and comfort. This is why, for decades now, alternative routes have been sought – beginning with the adoption of air springs (like Cadillac did in 1957 on the Eldorado Broughman – pictured on the left), or high-pressure hydraulic implants (like the hydro-pneumatic system of the Citroen DS of 1955, picture on the right), which allows the regulation of both damping and oscillations along with ground clearance. These solutions, besides being expensive, have suffered from many issues of reliability – so much so that Cadillac, after many years, eliminated air cushions (seen next to the tyres in the picture on the left) and returned to classic metallic springs. Citroen, on the other hand, has followed the development of its system until the present – integrating this more-and-more with advanced electronics.

The driver can still intervene 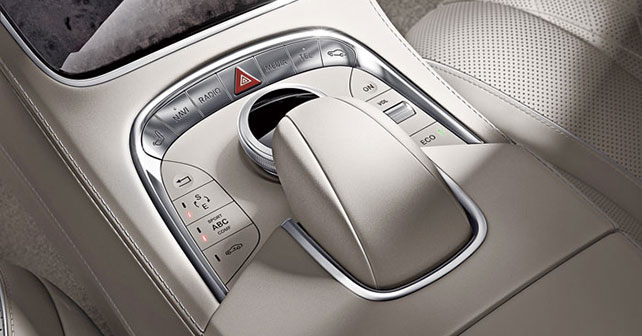 The suspension of the S-Class can be modified by the driver, who can adjust the ride height, and also select between Sport and Comfort programs

Mix of technologies
With respect to the Mercedes 600 of half-a-century ago, with pneumatic suspension but lacking electronics, this is a whole different world – as evidenced by the twists of wiring and oil pipes 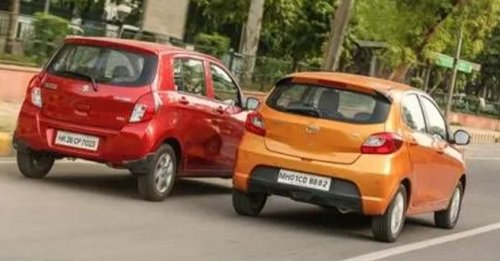