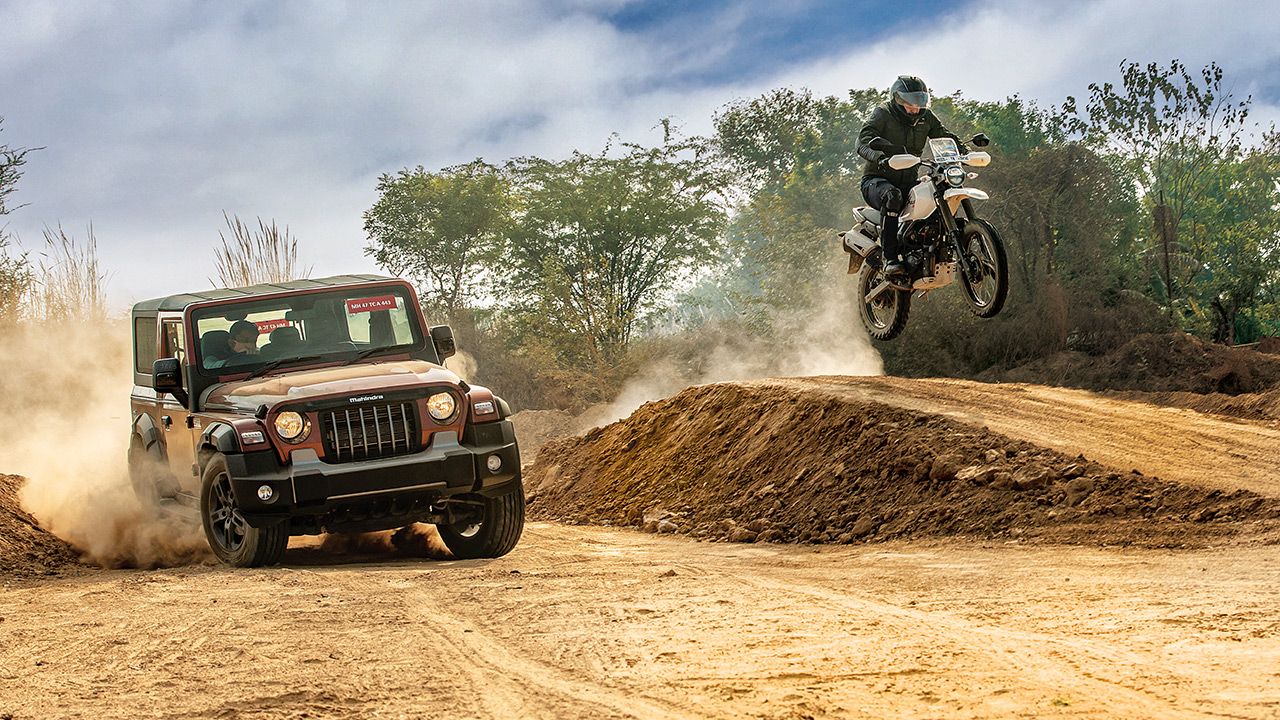 The Mahindra Thar and the Hero Xpulse 200 are testaments to the fact that you don’t need to spend a fortune for a hardcore off-road machine.

Driving or riding on the tarmac can become boring and bland after a while. On straight and flat roads, everything seems to be in control, barring a few variables. You know that traction will be good and that you don’t have to worry about jerks and bumps, given that road conditions are good, of course – it’s just a bit too certain and mundane.

But it all changes when you decide to go off-road. The number of variables increases, and you can see things that once were in your control slipping out of it. That’s why off-roading is enjoyed by only a few – those who like the thrill of defying physics.

Thankfully, Indian manufacturers are making products for off-road enthusiasts, and what’s even better is that these products are affordable and can be enjoyed by all. You don’t need a Jeep Wrangler or a Triumph Tiger to go on an adventure off the beaten track. You can simply look at the two Indian machines that we have here – the Mahindra Thar and Hero Xpulse 200. 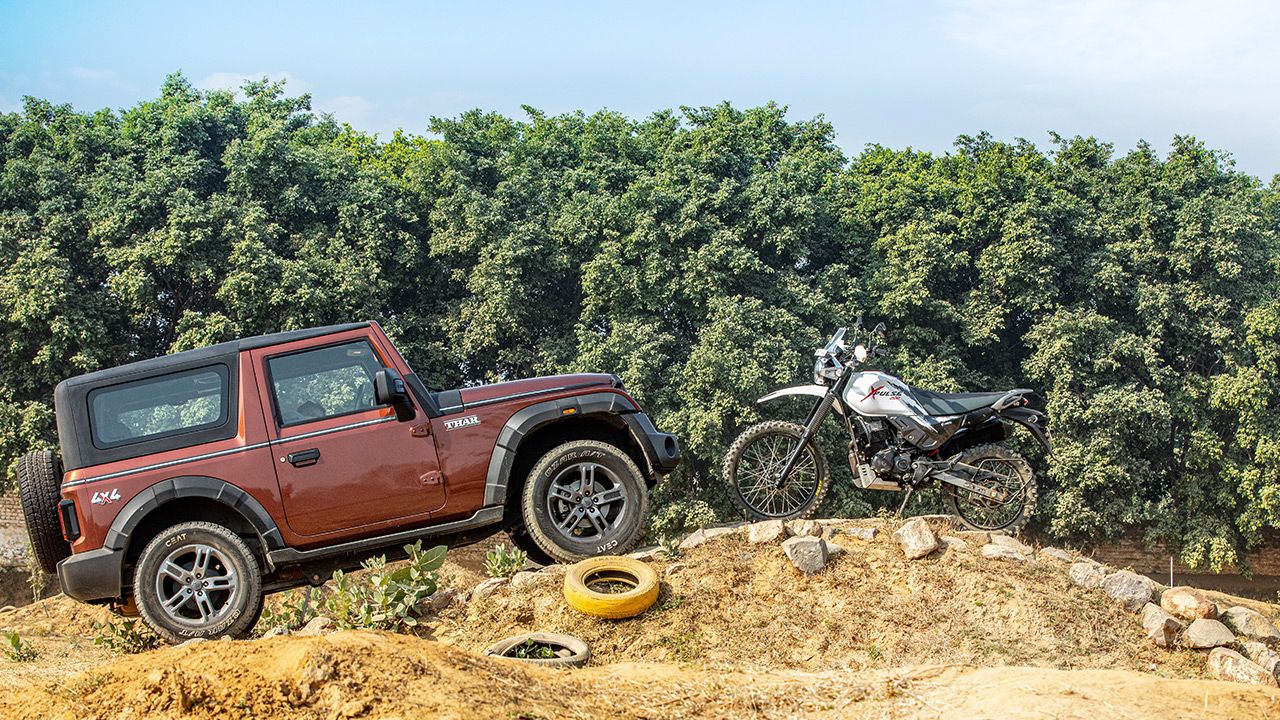 Shivank and I decided to take these two ‘out-of-the-box’ vehicles and have some fun with them at Off-Road Adventure Zone in Gurgaon. But which do you think is more fun – the car or the bike?

My answer is the Xpulse, obviously. You see, you can spend just ₹38,000 for the Rally Kit and turn your Xpulse 200 into a proper Dakar Rally-like machine. With larger front forks with more travel, a new rear monoshock, super knobby Maxxis tyres, a front fender brace, handlebar risers, and a taller new seat, the Xpulse looks like a true and highly capable dirt-bike. It also gets a longer gear lever for proper enduro riding boots and a longer side stand. The front suspension of the Kit is fully adjustable and so is the rear. Everything else remains the same. The 200cc single-cylinder engine is still peppy enough for proper dirt riding fun.

With the handlebar risers, the riding position improves significantly for off-road riding. I think it could be raised a bit more for better control though. The front suspension of the standard bike is not the best for proper off-road thrashing, but with the fully adjustable front forks, it feels much better. It responds more accurately on the dirt, and riding in deep sand or on rocks is never a problem. 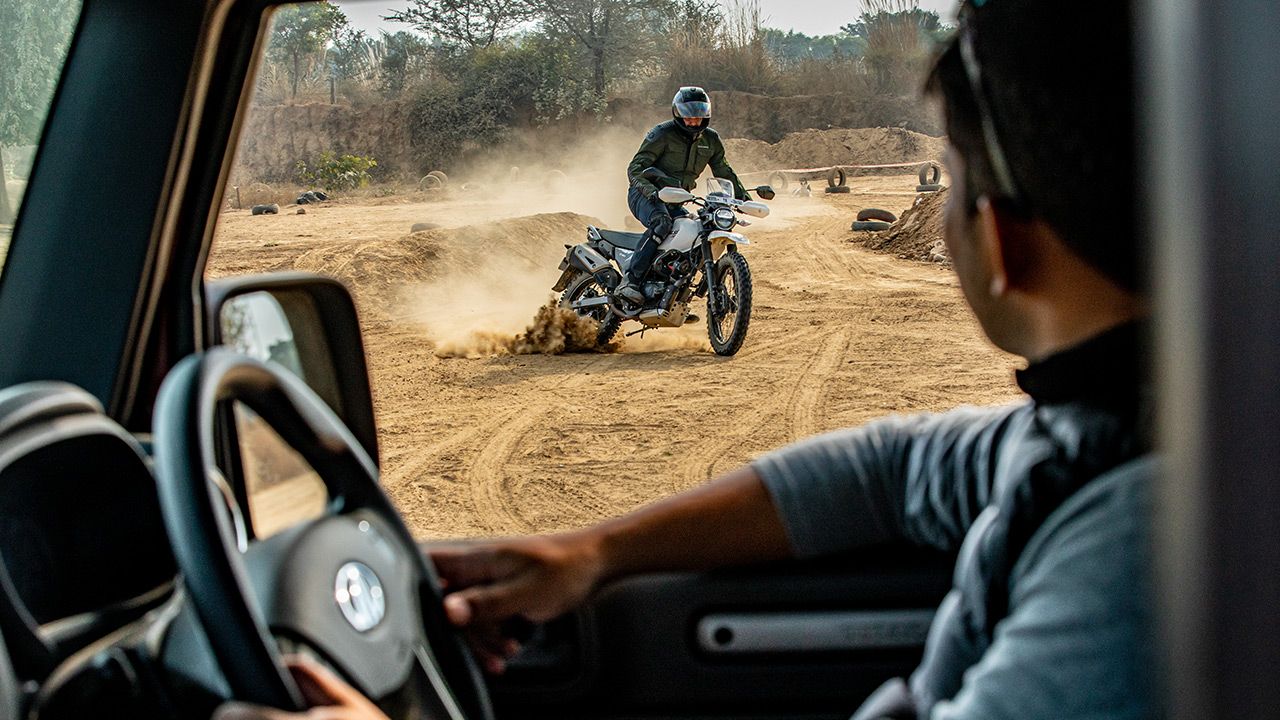 I also rode the bike on a newly laid out motocross track and attempted some pretty big jumps, and the suspension effectively and easily soaked up everything. There, however, was a problem with the handlebar while attempting big jumps – it wasn’t able to take the weight of my wrists and bent the moment the bike hit the ground. I think an additional crossbar brace on the handlebar will be required for proper motocross riding. That said, for small jumps, the Xpulse can handle itself very well.

The new Maxxis tyres were a delight, and this was the first time that I was riding on competition-ready knobbies. The grip was really good while riding on the dirt, so much so that it was a little hard for me to purposely drift the bike. I had to rely on the rear brake to make the rear slide out and then twist the throttle open to power slide. The front wheel’s sure-footed grip really helped me in steering the bike – I was able to confidently attack sharp corners at pretty good speeds. 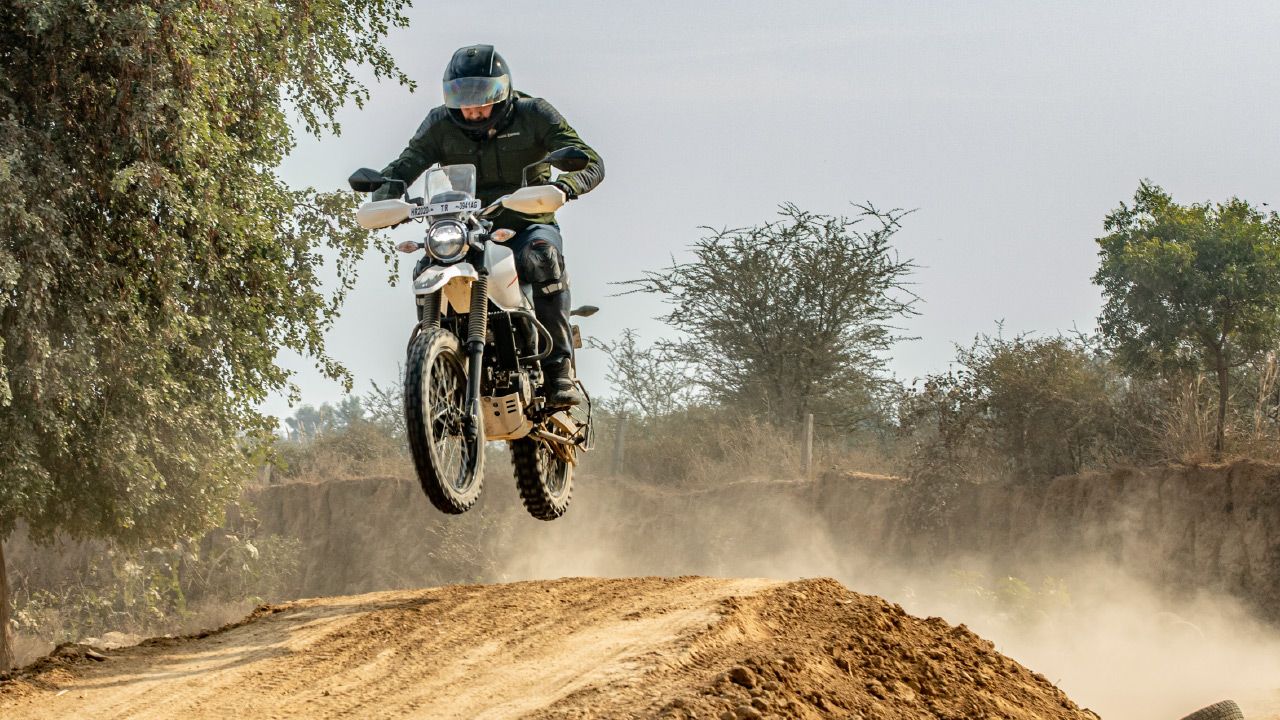 The engine is great for having fun in the dirt, although I think that some professional riders might prefer to change the sprockets for better gear ratios. First and second gears need to be able to hold longer. The transmission is still set up for urban riding, but changing the sprocket won’t be a problem at all. The torque delivery is still pretty impressive for this bike – it can take on steep gradients without any problem. The Xpulse with the Rally Kit is an impressive machine. I rode it for an entire day, with a smile on my face – something I’m not sure was the case with Shivank.

Diamond in the rough – Thar Petrol AT

Being a biker at heart, I know the smile Jared is talking about. Do I envy him? Nope, not this time. You see, the Thar is just as potent as the Xpulse – maybe even more. And on the plus side, the Thar doesn’t require you to eat dirt or roll in mud while having fun. And, yeah, since it has two more wheels, the chances of me falling over and over again were next to zero. 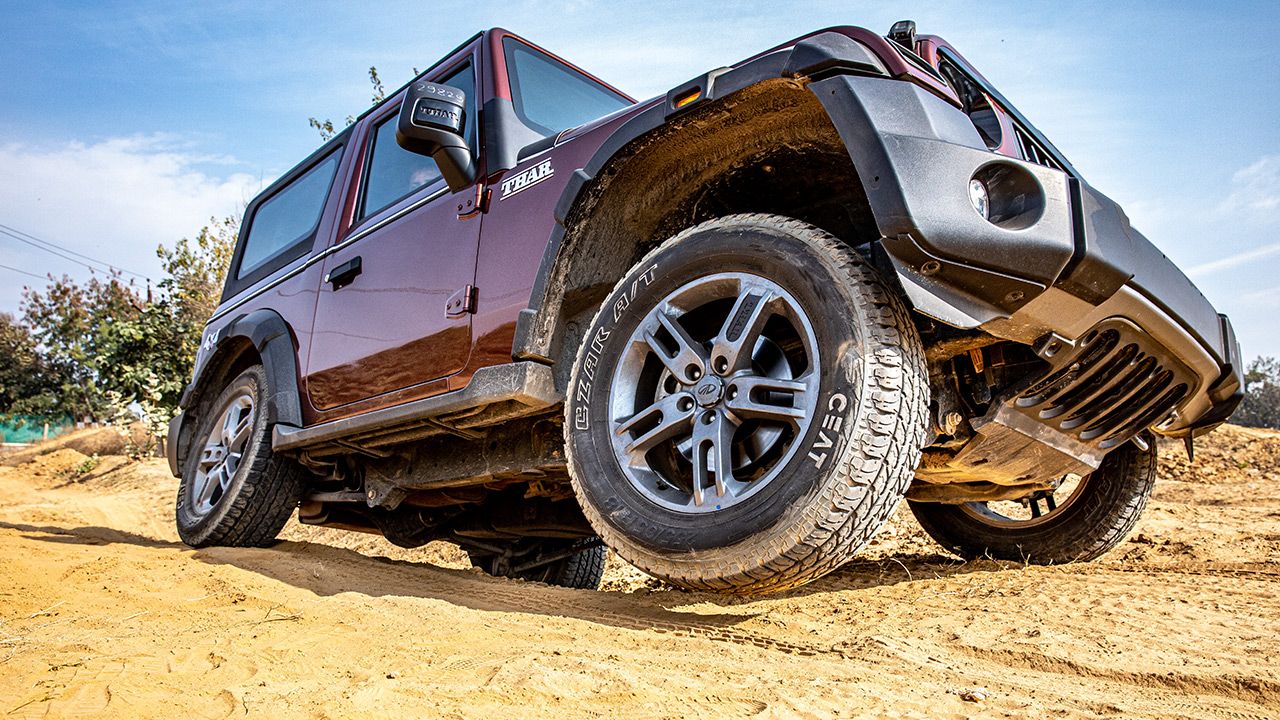 Make no mistake, I love motorcycles but on the road and the track. Dirt riding doesn’t get my heart racing as much – in fact, it gives me more anxiety than thrills. So, as great a purpose-built off-road motorcycle or the Xpulse Rally kit is, my choice for the day was the Thar.

The Thar you see here is the petrol automatic version. Before you scream bloody murder, let me tell you that it has the all-new mStallion petrol engine, which delivers 150bhp and 320Nm in this spec – yes, that’s 20Nm more than the diesel engine! The 6-speed torque converter is a gem, too. And together, the duo makes for an effortless and quite sprightly drive on any terrain.

You see, the beauty of this engine is that it pours its peak torque at just 1,500rpm, which is 100rpm lower than the diesel. Plus, it also stays put for 200rpm longer (3,000rpm instead of 2,800rpm of the diesel). Astonishingly, it actually drives like a diesel. Whether you’re scaling steep inclines or rock crawling, there’s always enough torque at your disposal. And don’t even get me started on its refinement – it is simply class-leading.

The Thar has always been a mountain goat, but in its latest avatar, it now has even grippier hooves. Unlike the Xpulse Rally Kit, the Thar packs some serious off-road credentials right from the showroom – 18-inch all-terrain tyres, four-wheel drive, a mechanically locking rear differential, BLD (brake locking differential), and a low-ratio transfer box, which multiplies torque by 2.48 times.

With an approach angle of 41.8 degrees, a ramp over angle of 27 degrees, a departure angle of 36.8 degrees, a ground clearance of 226mm, and a crawl ratio of 42:1, there’s no stopping the Thar. Throw anything at it – chicken holes, side inclines, articulation ramp, and what have you, the Thar, even in this Petrol AT spec, just glides over everything like a walk in a park. 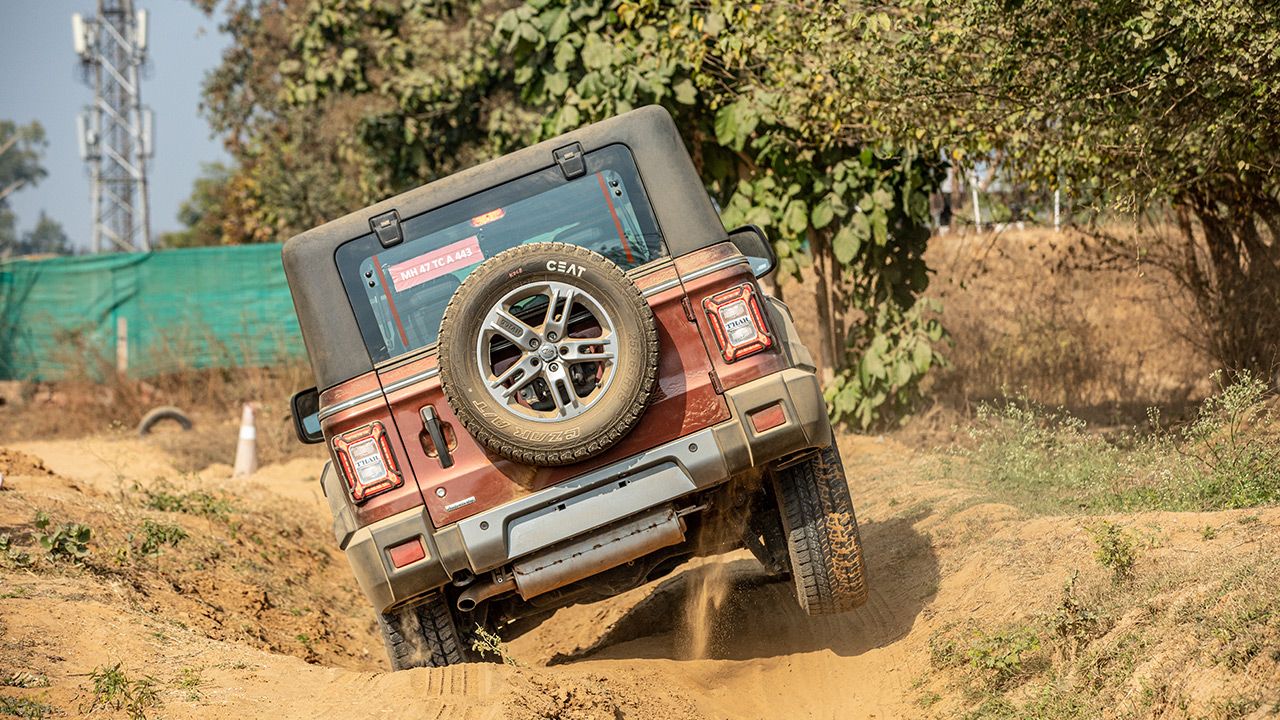 What’s more, with its coil springs replacing the leaf springs at the back, it has better wheel articulation off-road and even a better ride quality on the road. There are more creature comforts inside, and it looks spectacular, without being crude. Make no mistake, it’s not perfect, but it’s easier to live with on a daily basis now. I wish Mahindra had bothered to include a dead pedal, especially in the AT variants, to make long journeys comfortable.

Speaking of road-trips, the Thar is a more capable highway bruiser now. The ride remains planted till 100 – 110km/h and you can easily cruise at these speeds. Despite having a drag coefficient of a brick, the Thar can hit even higher triple-digit speeds, thanks to its mighty mStallion engine. Don’t do that though because it’s still a high-riding body-on-frame SUV subject to the laws of physics. 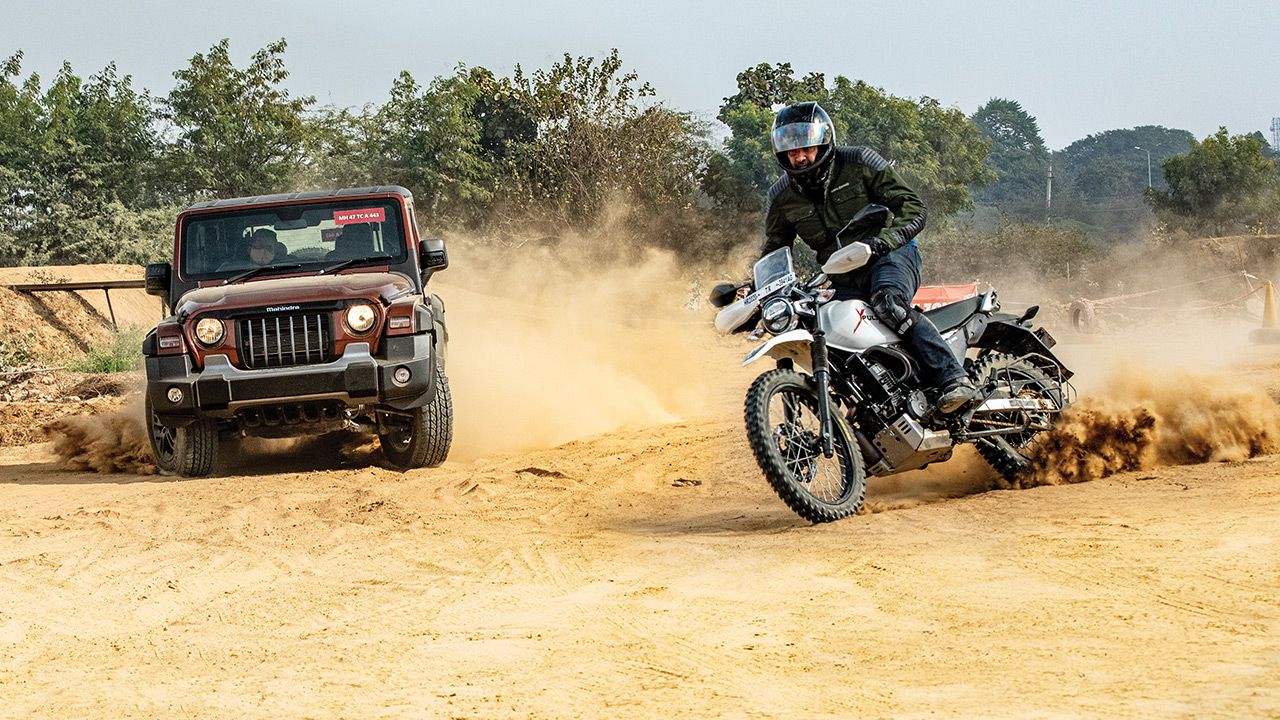 At the end of our off-road shootout, both Jared and I were grinning from ear-to-ear. Jared was a little tired though, and if I remember correctly, he was limping too – the price you pay for having two wheels too less on a low-traction surface. But jokes apart, we had a crazy time with these two machines – they are simply brilliant.

Truth be told, it’s a matter of pride that we in India are now producing these highly capable off-road machines at a fraction of a cost. For a change, you won’t have to buy these Make-in-India products to prove your nationalism – you’ll buy them on their merit and because they are bloody good at their job.

X-factor: The only road-legal enduro motorcycle in the country.

X-factor: The Thar Petrol AT is the most complete variant in the entire range, period.