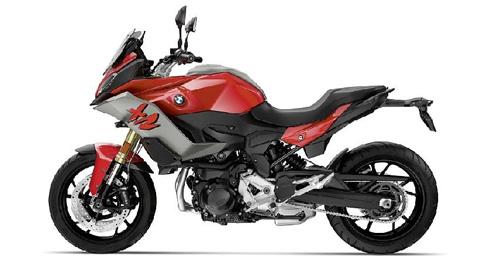 The BMW F900XR Mileage is 23 kilometers per litre.

The F 900 XR is the German manufacturer’s latest addition to its Adventure Sport space. It was first unveiled alongside the F900R at the 2019 EICMA show in Milan. It is purposed as a long-riding riding tool and brought to India via the CBU route.

Moreover, the F 900 XR is largely based on the same platform as the F 850 GS, as it shares a lot of components and titbits with its smaller-capacity adventure sibling.

The styling of the F 900 XR is pretty much similar to the larger-capacity S 1000 XR, which also lies in the same category. The front-end of the F 900 XR is dominated by a pair of striking LED lighting headlamps that also sport LED DRLs. The fairing is sharply chiselled as it sports sharp lines, which certainly gives the F 900 XR a character boost. The tail is slim and short, which, in turn, makes the front of the motorcycle look quite beefy in profile.

At the heart of the F 900 XR is an 895cc parallel-twin petrol engine, which is good for 103bhp and 92Nm of torque. It comes mated to a 6-speed manual gearbox as standard. And, of course, the engine is also compliant with BS-VI emission standards. As for the BMW F 900 XR mileage, expect it to return around 20km/l.

There isn’t much new with the BMW F 900 XR new model as it shares a lot of its hardware with the F 850 GS. It is built around the same steel bridge frame and comes fitted with non-adjustable 43mm upside-down front fork and a mono-shock at the back. Moreover, the BMW comes fitted with a 120/70 ZR 17 tyre at the front and a 180/55 ZR 17 tyre at the rear. As for braking, the bike uses dual 320mm disc brakes at the front and a 265mm disc at the rear.

On the features front, the F 900 XR comes equipped with a 6.5-inch colour TFT display with Bluetooth connectivity, LED headlamps with LED DRLs, and an LED taillamp. Other than that, you also get two riding modes – Rain and Road – and safety features like ABS and traction control as standard.

On top of that, the Pro variant gets cruise control and a quick-shifter as standard. Semi-electronic suspension or Dynamic ESA at the rear wheel are optional extras for the Pro variant.

BMW F900XR Price in Near By Cities