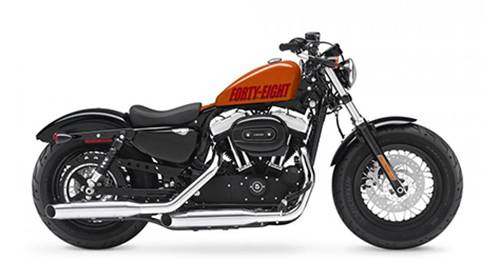 The Harley-Davidson Forty Eight Mileage is 20 kilometers per litre.

The Forty Eight lies in the middle of the Sportster range in Harley-Davidson’s product portfolio in the Indian market. The Forty Eight has a lot of character and muscularity in its design. Other than that, the typical Harley gets a traditional peanut-shaped fuel tank, loads of chrome usage, nine-spoke alloy wheels and a classic handlebar on top of the round halogen headlamp.

The Harley-Davidson Forty Eight new model shares its safety features and electronic aids with the 1200 Custom. The instrument cluster is an analogue unit for the speedometer accompanied by a small digital display for the odometer and fuel gauge. As for the safety equipment, ABS is standard across the range. The electricals constitute a halogen headlamp at the front and a modern LED taillamp at the rear.

Harley-Davidson Forty Eight Price in Near By Cities