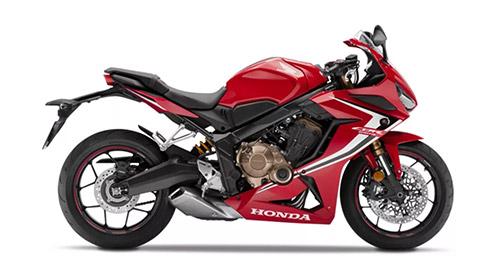 The Honda CBR650R Mileage is 25 kilometers per litre.

The Honda CBR650R is the sporty successor to the old CBR650F, a fan favourite in the middleweight motorcycle category. The CBR650F was one of the few middleweight offerings in India that came with an inline 4-cylinder engine. Now with the CBR650R, not only does Honda revive its pedigree in that category in India. But also makes clear its intent to introduce sportier motorcycles in the Indian market. The launch of the CBR650R in India was in tandem with its naked variant, the Honda CB650R. Ever since BS4-emission norms, the updates to the BS6 variant of the CBR650R have been minimal. The motorcycle has seen detuning and drops in performance figures. At the same time, an increase in weight as well as price. Read on for more information on the new version of the BS6 Honda CBR650R.

The new middleweight CBR has looks inspired by the Japanese automaker's flagship, the 1000cc Fireblade. Modelled after Honda's behemoth, the CBR650R features a more aggressive rider's triangle. This can be credited to the new footpegs and clip-ons, for a sportier posture on the motorcycle. The look of the CBR features a Fireblade inspired design and colour scheme. The front end gets LEDs modelled after the litre-class supersport, and the rear end gets a clean, conventional Honda tail light. The dimensions of the bike stand at 2128mm in length, 749mm in width and a height of 1150mm, ensuring that the bike is nimble despite being an inline-4 beast.

Honda is famous for putting what they learn on the track in their road-legal supersport bikes. And the CBR650R's inline-4 cylinder 648.72cc engine is no less. The latest power figures, however, is where the Indian variant of the motorcycle misses out. The international variant of the Honda CBR650R gets 95hp at 12,000rpm and 64Nm of torque at 8,500rpm. But the Indian variant came detuned for Indian road conditions, offering a reasonable 88.4hp at 11,500 rpm and 60.1Nm at 8,000rpm. After the latest updates, however, the middleweight sport-tourer now offers 85.8hp of peak power and 57.5Nm of peak torque. In pure Honda fashion, the 15.4-litre tank of this middleweight sport-tourer drops a decent mileage of 20.4kmpl. The power is put down through a manual 6-speed transmission.

This is somewhere the new CBR has seen significant improvement. The CBR650R gets Showa’s 41mm Separate Function Big Piston fork on the front for better handling, and a monoshock suspension on the rear. Front braking is supplied by twin 310mm discs and Nissin dual-piston callipers with a 240mm disc on the rear end.

The new Honda CBR doesn't get a lot when it comes to features, but it definitely gets the basics. Features include a complete LED treatment with improved headlight reflectors in the latest update. For the display, the motorcycle gets an LCD display that has been revised now for better daytime visibility. The bike also gets a Type-C socket under the seat. For safety, the middleweight motorcycle gets Dual Channel ABS, with Honda's version of traction control called Honda Selectable Torque Control System (HSTC).

The Honda CBR650R comes in one Dual Channel ABS variant in India as standard, at a price point of ₹8.88 lakhs (Ex-Showroom) and is available in two colour schemes, Grand Prix Red and Matte Gunpowder Black Metallic. Check out the On-Road price per city for the Honda CBR650R here.

When did Honda introduce the CBR650R in India?

How many variants of the Honda CBR650R are currently on sale?

The Honda CBR650R is currently available in 1 variant.

Honda CBR650R Price in Near By Cities