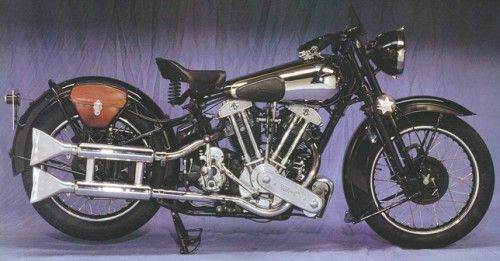 The bike that smashed all the previous records is a Brough Superior SS100 which was manufactured in 1929.

Called as the “Rolls-Royce of Motorcycles” by many motorcycle enthusiasts all across the globe, Brough Superior earned a reputation between 1919 and 1940 which cannot be equalled by any other manufacturer ever.

Many veterans still call it the first superbike ever as the machines were named after the speed they could go up to. The SS80 was made to reach a top speed of 80 miles per hour and the SS100 could do 100 miles to an hour proudly in those days. Any motorcycle that did not meet the claimed figures was then supposed to be returned to the garage where it would be made to do so. The fit and finish made it earn the nickname Rolls-Royce of Motorcycles and the price tag synchronised with it. In fact, Lawrence of Arabia owned, at different times, eight Brough Superiors. Each bike was made according to the specific needs of the customer and that’s why no two Brough Superiors were of similar configuration.

Confirming the news, Paul d’Orleans from the Vintagen – the vintage motorcycle website that sold the motorcycle – said, “George Brough was a genius of motorcycle design, and the SS100 is his masterpiece. It’s no surprise his machines fetch such prices.”