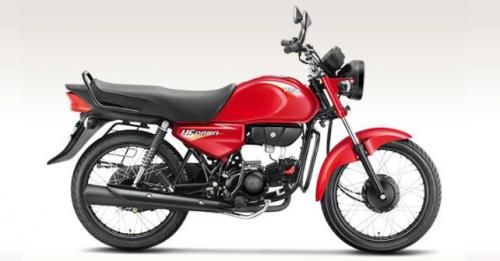 Here MotoCorp has relaunched its entry level HF Dawn commuter motorcycle in BS IV specification. The earlier model was discontinued as it was a BS III model. The 2018 Hero HF Dawn has now made a comeback as a BS IV model. It continues to be powered by the same 97.2cc, single cylinder, air cooled engine. The unit develops 7bhp of max power and 8Nm of peak torque. It is mated to a four-speed manual transmission.

Hero is offering this model with kick start ignition and drum brakes front and rear as this is an entry level model in a highly price sensitive market. Although a higher end variant is expected later with electric ignition, front disc brake and alloy wheels. As of now braking duties are carried out by a 130mm front drum and a 110mm rear drum brake. The suspension includes a telescopic front end and dual shock absorbers at the back.

The new 2018 HF Dawn is differentiated from the earlier model cosmetically by a blacked out engine, wiring and mechanicals, etc. The motorcycle is currently being availed in red and black colour options.

Priced at Rs. 37,400 (ex-showroom, Orissa) the 2018 Hero HF Dawn is currently the most affordable motorcycle from Hero MotoCorp. The motorcycle was silently launched a couple of days ago and the company has a phased launched planned for it across the country.