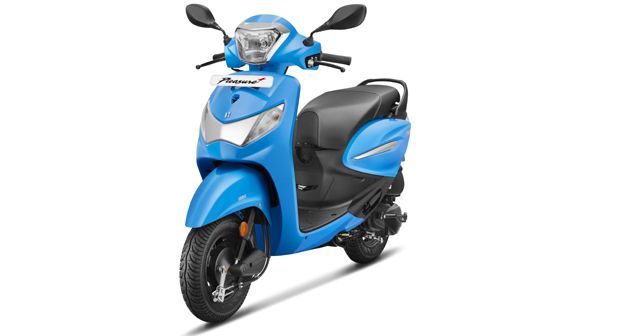 Hero MotoCorp has launched the 2020 Pleasure+ BS-VI at ₹54,800. Like the outgoing BS-IV model, the BS-VI version will continue to be sold in two variants – the Self Start Steel Wheel and the higher-spec Self Start Alloy Wheel. The latter is priced at ₹56,800 (all prices are ex-showroom, Delhi). Compared to the outgoing model, the BS-VI iteration of the Pleasure+ is pricier by about ₹6,300.

The BS-VI update for the Pleasure+ brings with it minimal changes, most significant of them is the addition of the fuel-injection system in the 110cc scooter. However, the scooter continues to be powered by the single-cylinder air-cooled motor. Even the power and torque figures remain unchanged at 8bhp & 8.7Nm. Also, to carry out the BS-VI conversion, Hero has updated the scooter's exhaust system and reduced the peak power delivery point by 500rpm (8bhp @ 7,000rpm instead of the earlier 7,500rpm limit).

Though the power & torque figures are the same, Hero claims that its new 'XSens Tech' has given the BS-VI Pleasure+ 10% faster acceleration and 10% higher fuel-efficiency (revised figures are yet to be released). The BS-VI Pleasure+ is available in three matte-finish colour options (red, green, and axis grey) and four gloss-finish colour options (red, white, blue, and black).

Whether it can be had online purchase.

Is this BS6 Pleasure scooty available in Jamshedpur.Give the location and price.