After 40 years of its existence, Honda Gold Wing arrives in India 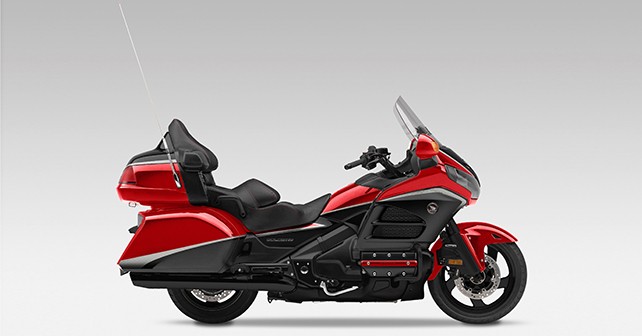 The biggest name in the world of motorcycle touring, Honda Gold Wing – GL1800, has decided to turn towards India on its 40th birthday.

Most of us in the automobile industry rely on our childhood memories when it comes to figuring out when the love for the automobiles blossomed. Some was fortunate enough to see them for real, and some lesser mortals like me were purely dependent on televisions and English movies which we got to see once in a while. Gold Wing was one of the first few ‘expensive’ motorcycles I ever remembered the name of. Thanks to some movie I saw on Star Movies. Soon, the exposure increased and I kind of distanced myself from these kind of motorcycles, but a major chunk of the motorcycle fraternity didn’t move with me. So, it was impossible for me not to get nostalgic when I got the press release from Honda PR saying that today, Honda launched the Gold Wing in India.

The motorcycle that got launched today is powered by a highly refined, six-cylinder, 1,832cc engine. The design and the styling just make sure that nothing hinders your experience on that perfect highway cruise. The lightweight aluminium frame and the single-sided swingarm provide exceptional stability to the motorcycle. Heated grips, heated seats and a foot-warming system give you enough confidence to ride without worrying about the weather. The 80W six-speaker surround sound system, that can play music from your iPod, iPhone and USB stick, will just let you sail throughout once you sit on this motorcycle. To make this mammoth of a machine more tamable, an electric reverse system has been integrated into it. Honda’s Combined Braking System (CBS) and an Antilock Braking System (ABS) let you focus on the fun side of your ride in all situations and conditions. The Airbag variant will also have a fully integrated airbag in it. The electronic cruise control will help the rider to ease more on those long straight stretches.

Speaking on the launch of the motorcycle, Mr. Yadvinder Singh Guleria, Vice President - Sales and Marketing, Honda Motorcycle and Scooter India said, “Honda Gold Wing introduction to India is further to the overwhelming response it received at the Auto Expo 2014. Deemed as the ultimate pinnacle for tour motorcycling, Gold Wing is a machine with the power, refinement and reliability suited for road tours even at the most far-flung destinations in complete comfort. We believe Gold Wing will further contribute to the remarkably rising touring culture in India. In fact, we have recently made the first delivery of The Gold Wing Airbag at our exclusive Wing World in New Delhi.”