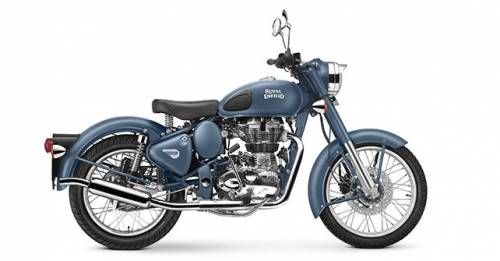 Following the tremendous response from the Limited Edition Despatch Series, Royal Enfield has decided to launch the Classic 500 motorcycle in Squadron Blue colour scheme for an on-road Delhi price of Rs. 1,86,688/-.

However, the standard bike will not feature the Despatch camouflage matte paint finish. Instead, the bike will get a solid blue colour scheme for its Classic 500 range, a colour inspired from their long standing association with the armed forces as a tribute to the Indian Air Force.

Rudratej Singh, President, Royal Enfield said, “The Classic 500 Squadron Blue is a tribute to Royal Enfield’s war time presence and association with the armed forces. We wanted a variant with a genuine armed forces heritage for our customers and for this, Royal Enfield turned to the Indian Air Force for inspiration. We had to be very particular about the colour to create an authenticity and also provide the motorcycle its post war appeal. This inspiration led us to create the Classic Squadron Blue which is now available at price of Rs 1,86,688 on-road Delhi”