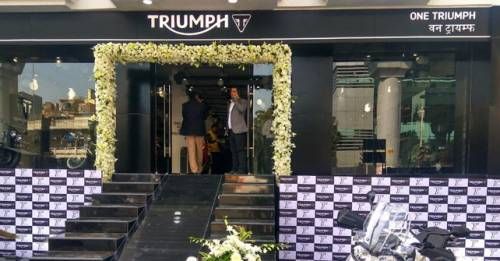 As a part of its third anniversary celebrations in India, Triumph Motorcycles opens its 14th delearship in the country in Greater Kailash, New Delhi.

Triumph Motorcycles India has opened its 14th dealership in the country. Run under the banner of One Triumph, the new outlet is the firm’s second retail outlet in Delhi NCR. It’s located in the East of Kailash.

Spread across an area of 5,000 sq. ft, the One Triumph outlet is built around the brand's global theme that's followed by all Triumph dealership around the world. The dealership boasts special zones such as a consultation lounge, ‘Build your Bike’ zone, merchandise section, two service bays and of course, the brand’s entire motorcycle line up for India. Triumph offers 16 models across 5 different categories in the country. These include the inconic Bonneville range (Street Twin, T100, T120 & Thruxton R), Speed Triple, Street Triple, 675 Daytona, Thunderbird range, Tiger range, and the Rocket III.

Commenting on the launch, Vimal Sumbly, Managing Director, Triumph Motorcycles India, said, “The opening of this dealership will strengthen the Triumph marque in the capital city and extend a comprehensive suite of after sales services to our esteemed customers. With this state-of-the-art dealership, our aim is to give our brand lovers an experience they deserve from an international motorcycle brand such as Triumph.”

The launch of the new dealership in Delhi also coincides with Triumph’s third anniversary in the Indian market. Over this span, over 3,500 customers have joined the British motorcycle marque in India. Triumph also has a CKD plant in Manesar. Globally, Triumph builds around 60,000 motorcycles per year, which are sold through over 750 dealers across the globe.