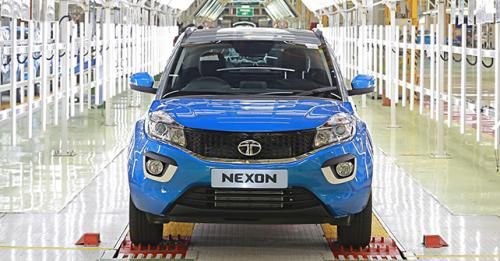 Tata Motors has now produced 10,000 units of the Nexon since its introduction in September 2017.

Tata Motors has announced that they have manufactured the 10,000th units of the Tata Nexon. The vehicle has now rolled off the production line at the Ranjangaon facility near Pune, Maharashtra.

After high anticipation, the Tata Nexon was launched in India on September 21, 2017. It is Tata’s contender in the sub-4 metre SUV segment as a rival to the Ford EcoSport, TUV300, the Honda WR-V and the Mighty Maruti Suzuki Vitara Brezza. Tata launched the Nexon between Rs. 5.85 lakh to Rs. 9.44 lakh (ex-showroom, Delhi) making it the most affordable offering in its segment.

Tata offers the Nexon in four trim levels – XE, XM, XT and XZ+ and is available with a 1.2-litre, three-pot, turbo petrol or a 1.5-litre, four-cylinder, turbo diesel engine options. Both engines produce 108bhp but vary in terms of torque output. The petrol motor is capable of developing 170Nm between 2,000-4,000 rpm, while the diesel engine has a peak torque output of 260Nm which is available from 1,500-2,750 rpm. Currently, both powertrains come with a 6-speed manual gearbox as standard.

Tata seems to have nailed it with the Nexon as a little over two month’s time, the product has reached a production milestone of 10,000th units.