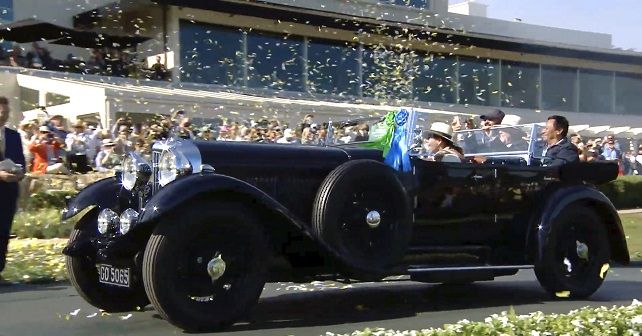 At the 69th annual Pebble Beach Concours d'Elegance, one of the world's most renowned car shows where the best cars in the world are on display, a 1931 Bentley 8-litre gurney nutting sport tourer was crowned Best of Show.

Pebble Beach might have a beautiful golf course that rivals any other on the planet, but once every year, one of the world's most spectacular car shows also takes place on the famed 18th fairway of the Pebble Beach Golf Links.

Since 1950, the Pebble Beach Concours d’Elegance has been an annual gathering of the rarest automobiles, along with international automotive luminaries and motorcar enthusiasts from around the globe. In recent times, car makers from all across the globe have displayed their cars at the Monterey Car Week but, the premier event is always the Concours d'Elegance where the world's best classic cars compete for the coveted crown of 'Best of Show'. The previous year, a 1937 Alfa Romeo 8C 2900B Touring Berlinetta was honoured and took the trophy home, and in 2017 a 1929 Mercedes-Benz S Barker Tourer won the title. It's safe to say that only the rarest and most spectacular cars can claim this crown.

This year, a beautiful 1931 Bentley 8-litre gurney nutting sport tourer was crowned Best of Show. To understand just how special this car is you have to look at its competition. This lovely 1931 Bentley, owned by Michael Kadoorie from Hong Kong, won the hearts of the judges who also considered a 1938 Talbot-Lago T150C-SS Figoni & Falaschi Teardrop Cabriolet, a 1936 Mercedes-Benz 540K Erdmann & Rossi Special Cabriolet and a 1962 Aston Martin DB4GT Zagato Coupé.

What makes the win even more special for Bentley is that it happened on the car makers centennial anniversary, and this is also the first time Bentley has claimed the title since 1965. According to Bentley, this particular model debuted in 1930 and was produced to compete with the Rolls-Royce Phantom II. Only 100 units of this model were eventually built.