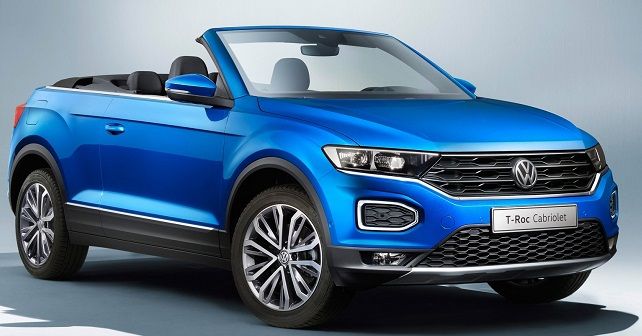 Volkswagen chops the roof off the T-Roc compact-SUV to lure drop-top enthusiasts who are on a budget!

Compact-SUVs are all the rage the world over. And the fact that a vast majority of us is attracted to these high-riding hatchbacks for no valid reason is nothing new actually. But they are in fashion these days, so whether you like the concept or not, compact-SUVs are here to stay. Now while everyone has more or less cashed in on this phenomenon, Volkswagen has now taken a step ahead (or maybe gone too far?) as they've unveiled the drop-top version of the T-Roc. Naturally, it's dubbed the T-Roc Cabriolet. Its world premier will take place at the Frankfurt Motor Show in September 2019, but details are already out.

To start off, the T-Roc isn't just a SUV that's lost its lid. In fact, Volkswagen has taken the trouble to make some necessary modifications. First and foremost, it's a two-door version, unlike the four-door T-Roc SUV. It's also 34mm longer and its wheelbase is stretched by another 37mm over the hardtop. The front seats are also housed higher by around 600mm so that the passengers can feel the wind in their hair. The convertible features a soft-top roof that can be opened or closed in 9 seconds up to speeds of 30km/h.

Powertrain options include two turbo petrol motors - 1.0-litre three-cylinder and 1.5-litre four-cylinder. The former is rated at 114bhp /200Nm, while the latter develops 148bhp and 250Nm. Both come paired to a six-speed manual as standard, but the 1.5-unit can also be paired with a seven-speed DSG auto.

Inside, it gets the same cabin with similar features and equipment as the hardtop version. At the back though, this one features two individual seats.

Volkswagen Beetle production stopped: The end of an era!