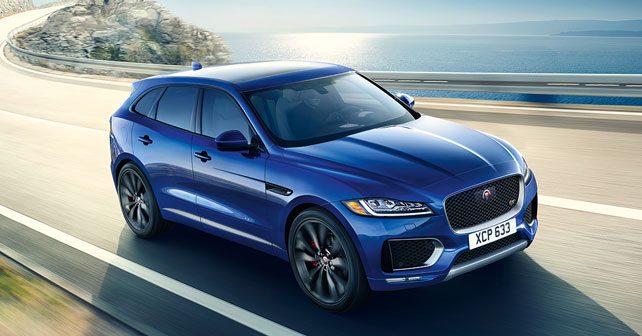 In a bid to make the most of the festive season, Jaguar India has released prices for its all-new F-Pace with the rate card starting at Rs. 68.40 lakh (ex-showroom Delhi). The official launch of the car is scheduled for the 20th of October in what will be a grand affair as Jaguar sets up a structure representing The Shard Skyscraper (considered to be a symbol for British Engineering) to mark the launch of the F-Pace in India.

Jaguar will be initially offering the F-Pace in India with a choice of two diesel engine options, a 2.0 litre, four cylinder diesel engine with 177bhp on tap and a more powerful 3.0 litre V6 turbo diesel engine developing 296bhp of maximum power and a potent 700Nm of peak torque, giving the car a 0 – 100 km/h time of 6.2 seconds and a top speed of 241 km/h. All models will come fitted with an eight-speed automatic gearbox sourced from ZF.

Highlights for the new Jaguar F-Pace include interior mood lighting, it comes with an Active Key which you can wear around your wrist, Jaguar’s InControl Touch Pro infotainment system, leather draped interiors and more.

Rohit Suri, President, Jaguar Land Rover India, said, “The launch of F-PACE in India on 20th October 2016 marks a significant milestone in the expansion of Jaguar’s product offering in India. F-PACE is Jaguar’s first performance SUV and is sure to capture hearts and minds of Jaguar fans and its distinguished & discerning customers spread across India.”

All prices are ex-showroom Delhi.