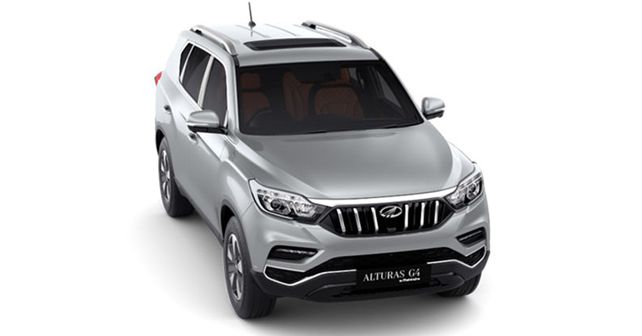 Here's a look at what we know about the upcoming Mahindra Alturas G4 so far and what all does it hold in store for us.

Mahindra and Mahindra (M&M) is all set to launch the upcoming Alturas G4 SUV on November 24 in India. M&M's gateway into the luxury SUV segment, the Alturas G4 made its first public appearance at the 2018 Auto Expo and is essentially a successor to the SsangYong Rexton. In Mahindra's model line-up, it will slot in above the XUV500.

The dimensions of the Alturas G4 are expected to be more or less similar to that of the second-gen SsangYong Rexton (available in the international markets) but this time around, it will be a Mahindra badged product. Consequently, the Alturas G4 features signature Mahindra styling traits like a front grille with vertical slats which sits between two large rectangular LED headlamps. Expect the interior of the Alturas G4 to be luxurious as well with the use of soft-touch materials all around the cabin and premium leather upholstery. The Alturas G4 will be offered in five exterior colour choices: New Pearl White, Napoli Black, Lakeside Brown, Dsat Silver and Regal Blue.

The Mahindra Alturas G4 will most likely be powered by Mahindra's 2.2-litre four-cylinder diesel motor which will generate around 183bhp and 420Nm of torque. It will be mated to a seven-speed automatic gearbox sourced from Mercedes-Benz. As of now, there are no plans to introduce a petrol motor and neither will it be offered with a manual transmission option, keeping in mind that it will be premium segment offering. It will be offered only in two variants with the top-spec version available with a 4WD configuration as compared to the lower-spec model's 2WD setup.

While the old Rexton only featured LED DRLs, the Alturas G4 will feature LED lighting all around, ranging from LED projector headlamps up front to LED tail lights. On the inside, it will feature dual-zone climate control, ventilated seats, an 8-inch touchscreen infotainment system with Apple CarPlay and Android Auto compatibility. The instrument cluster is also likely to get a makeover with a combination of digital and analogue components, compared to the old Rexton's all-analogue console. Since its a luxury segment offering, expect some extra bits like a Start/Stop button, electric tailgate and a reverse parking camera.

Mahindra will position the Alturas G4 to up against the current ladder-frame SUVs in the Indian market such as the Ford Endeavour, Toyota Fortuner and the Isuzu MU-X.

As it will compete against the likes of the Endeavour and the Fortuner, expect Mahindra to price the Alturas G4 upwards of Rs 30 lakh (Ex-showroom).