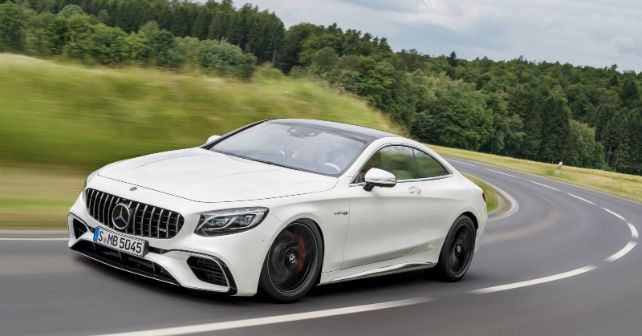 It seems like Mercedes-Benz is going all guns blazing with their AMG models this year. Just last month, the company brought in the new E63 S 4Matic+ to Indian shores and soon followed it up with the introduction of the GLE 43 OrangeArt, SLC 43 RedArt Editions. They are not getting ready to bring in the flagship S63 Coupe 4Matic+ for launch in India on 18th June.

The Mercedes-AMG S63 Coupe 4Matic+ will come with the same motor that we recently experienced in the E63 S. In fact, at 603bhp, it makes identical power figures. The S does get a surplus of 50Nm over the E, bringing its torque rating up to an insane 900Nm. Power is sent to all-four wheels with the help of a 9-speed automatic transmission. Mercedes-AMG claims that the S63 Coupe cross the 100km/h mark on the speedo in just 3.5 seconds and record a top-speed of 250km/h. If you opt for the AMG driver’s pack though, the top-speed can be raised to 300km/h.

In terms of design, the S63 looks smaller than its proportions suggest. There is the wide vertically slat grille – similar to the one on the AMG GT R. The large air dams on the front bumper give it a sport appeal. The clean lines along the sides and the smooth coupe profile give the car an elegant persona.

On the inside, the S63 Coupe gets typically Mercedes look and feel. The twin large screen – for the instrument cluster and the infotainment system dominate the dashboard. Expect the S63 to be fitted with AMG sports seats, AMG steering wheel, and being the flagship, get a long list of luxury and safety tech. Mercedes-AMG will announce the prices of the S63 Coupe 4Matic+ on 18th June, but we expect it to be around the Rs 3 crore mark.