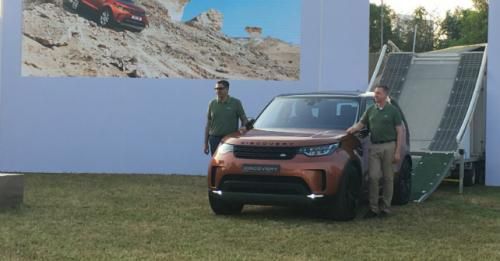 Land Rover announced the prices of the new-generation Discovery in August earlier this year. The car will now go on sale in India

Just a few months back, Land Rover announced the entry of the new-generation Discovery in India. In fact, at the time, the company also released the price of their new SUV. The base-variant of the SUV with the 3.0-litre petrol motor is priced at Rs 71.37 lakh while the base 3.0-litre diesel demands Rs 82.20 lakh. The top-spec variant of the petrol and diesel are priced at Rs 88.56 lakhs and Rs 1.08 crore respectively. All prices ex-showroom Delhi. Bookings for the new Discovery have already begun in August, but its deliveries will commence now.

The Land Rover Discovery was first showcased in concept form at the New York Auto Show in 2014. In terms of design, this new Discovery, looks exactly like its concept form. It does away with the traditional boxy design and brings it in line with the current generation line-up from Land Rover. In fact, it even looks like a larger version of the Discovery Sport. this is the third-generation of the Discovery to be sold in India. The new Discovery is based on Land Rover’s new aluminium monocoque chassis that helps it shed nearly 500kg from its predecessor. Of course, this considerable reduction in weight has led to an equivalent improvement in performance.

On the inside, the Discovery gets a cleanly laid out dash with well-bolstered seats and good upholstery. Although it has a 7-seat layout, the last row is best suited for kids or for young adults over short distances. Features include, a large central touchscreen, cooled/heated seats at the front as well as in the middle row, independent screen for the second-row passengers, 14-speaker Meridian surround sound system and more. In terms of safety, it comes with all LED lighting, airbags, ABS, EBD, cornering brake control and more.

The Discovery is on sale with two engine variants – petrol and diesel. The 3.0-litre diesel is good for 255bhp and an impressive 600Nm. Meanwhile, the petrol-powered Discovery churns out 335bhp and 450Nm from a 3.0-litre motor. Transmission duties are performed by an 8-speed automatic. Land Rover claims that the Discovery petrol can do the 0-100km/h dash in just 7.1 seconds while its diesel iteration takes 8.1 seconds to achieve the feat.