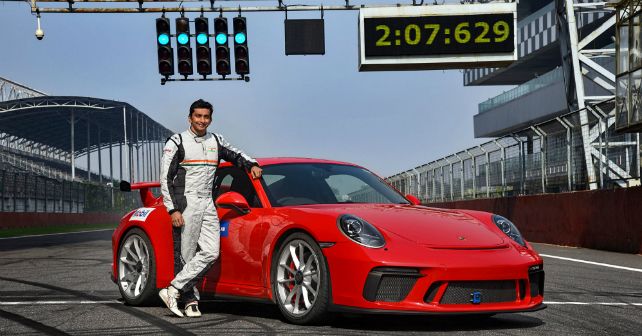 With Narain Karthikeyan at the wheel, the Porsche 911 GT3 completed a lap of the Buddh International Circuit in a record time of 2 minutes 7.6 seconds.

Just prior to its launch last year, the Mercedes-AMG GT R shattered the Buddh International Circuit (BIC) lap record by clocking a time of 2 minutes 9.8 seconds. The Mercedes supercar broke the previous lap record of the Audi R8 V10 Plus by an impressive 2.8 seconds. Now, Porsche has gone one-up over the Mercedes-AMG. With former Formula 1 racer Narain Karthikeyan at the wheel, the Porsche 911 GT3 took a complete lap of the circuit in just 2 minutes 7.6 seconds – a phenomenal 2.2 seconds faster than the AMG GT R. This makes the 911 GT3 the fastest street-legal production car in India. This record was officially certified by Federation of Motor Sports Clubs of India (FMSCI).

Speaking about the lap record, Pavan Shetty, Director of Porsche India, added, “Across its 50-year history, the 911 has enjoyed a long and fruitful relationship with the record books and we’re proud to see that tradition continue in India today. The lap record set here by the 911 GT3 is another example of the concentration of Porsche’s motorsport expertise into a high-performance sports car that also masters everyday driving. Offering an unfiltered driving experience and bridging the gap between the track and the road, it is a real highlight of the iconic 911 range which continues to win the hearts and minds of our customers in India.” 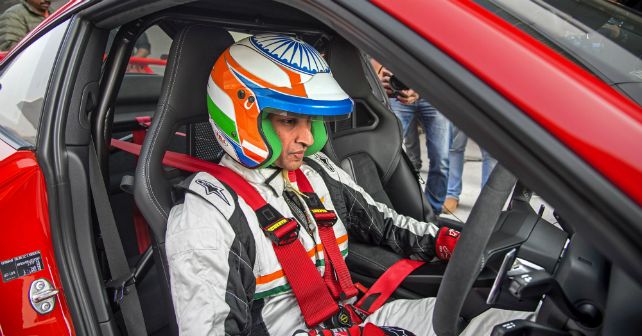 Porsche brought in the 911 GT3 to India last year. Powered by a 4.0-litre six-pot boxer motor, the 911 GT3 develops 493bhp and 540Nm. All of this power is sent to the rear wheels via a 7-speed PDK auto box. Porsche claims that the car can do 0-100km/h in just 3.4 seconds and record a top speed of 318km/h. At the BIC, however, the car recorded a top speed of 262km/h. To pull out such performance, Porsche has not also worked hugely on weight reduction. The 911 GT3 weighs just 1,430 kilos with a tank full of fuel. Porsche has fitted it with a carbon rear wing to ensure a reduction in downforce without major weight gain. The weight of the front-end is also optimised for better airflow. The Porsche 911 GT3 is priced at Rs 2.31 crore in India (ex-showroom).