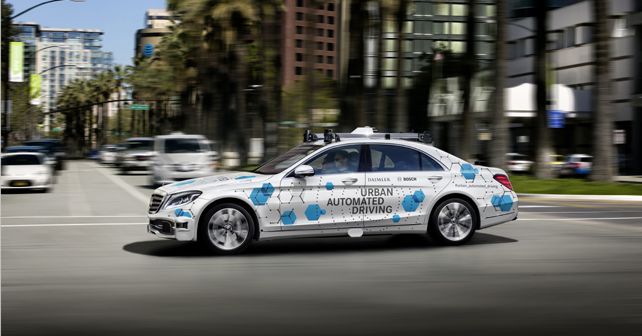 Offering an automated driving experience to a chosen segment of the user community, the specific test area for the on-demand ride-hailing service app will be the San Carlos/Stevens Corridor between downtown and west San José.

By jointly working on and developing concepts for fully-automated driving in urban environments, Daimler and Bosch have embarked on a mission to improve the flow of traffic in major metropolitan cities by enhancing road safety in areas which are bound to witness a major population spurt in the coming years. In order to choose a testing ground for their ride-hailing pilot project, Daimler and Bosch have zeroed-down on the Californian city of San José to do the trials of their upcoming fully-automated on-demand ride-hailing service. While the trials are set to begin during the second half of 2019, both the German giants have already signed a MoU with the Californian government in order to finalise the trial activity. The ride-hailing service itself has been given an SAE level of 4/5.

For those who are new to the autonomous driving industry, SAE stands for the Society of Automotive Engineers, a US-based association which ranks vehicles from 0 to 5 by determining their intelligence level and automation capabilities. A level-4 means the vehicle requires no human intervention. However, there is a manual-override option available for very difficult scenarios. With the help of automated Mercedes-Benz S-Class vehicles, Daimler and Bosch propose to offer the ride-hailing service to a small segment of the San José user community, as the trials will initially run only on the San Carlos/Stevens Creek corridor between downtown and west San José.

The ride-hailing service app, which will be operated by Daimler Mobility Services, will demonstrate how numerous mobility services which offer car sharing through multi-modal platforms can be connected via artificial intelligence. The trials will determine information on several integration parameters in order to come up with the most seamless experience of integrating autonomous vehicles in the existing transportation network.

'The pilot project is an opportunity to explore how autonomous vehicles can help us better meet future transportation needs,' said Sam Liccardo, Mayor of San José. 'Since many years we consequently push autonomous driving. With this pilot we will generate valuable insights to connect fully automated vehicles in the best way with users of future mobility services,” said Dr Michael Hafner, Vice President of Drive Technologies and Automated Driving at Daimler AG.