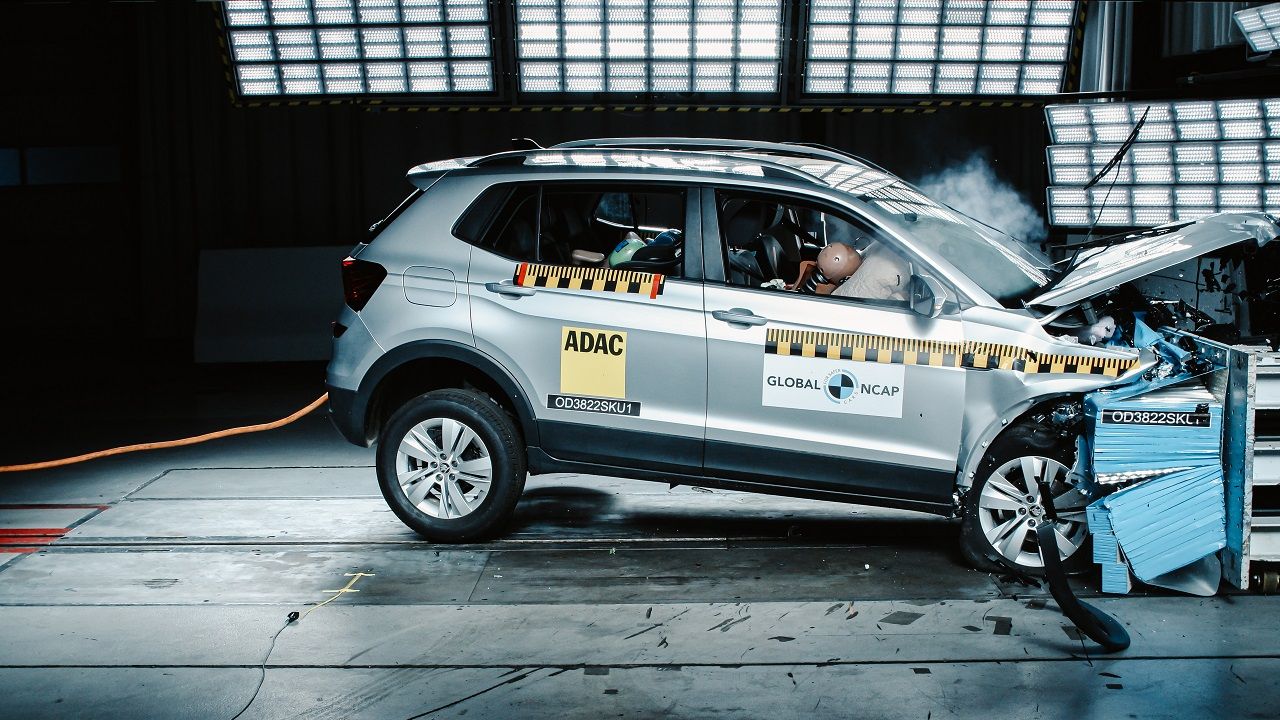 The made-in-India Volkswagen Group siblings scored top safety ratings in Global NCAP's updated and more demanding crash tests. The Kushaq and Taigun are also the first made-in-India vehicles to get five stars for both adult and child occupant protection.

The Skoda Kushaq and Volkwagen Taigun have passed the Global NCAP’s crash tests with flying colours. The made-in-India Volkswagen Group siblings scored full five-star ratings in the crash tests for both adult and child occupant safety. What’s worth highlighting here is the fact that both these SUVs are the first locally-made vehicles to be tested under GNCAP’s updated and more demanding crash test protocols.

As you might already know, the Kushaq and Taigun are mechanically identical vehicles, as they are underpinned by VW’s MQB A0 IN platform, and are even built in the same factory. The top-end variants of both SUVs come equipped with six airbags, Electronic Stability Control (ESC), ISOFIX child seat mounts, and more. 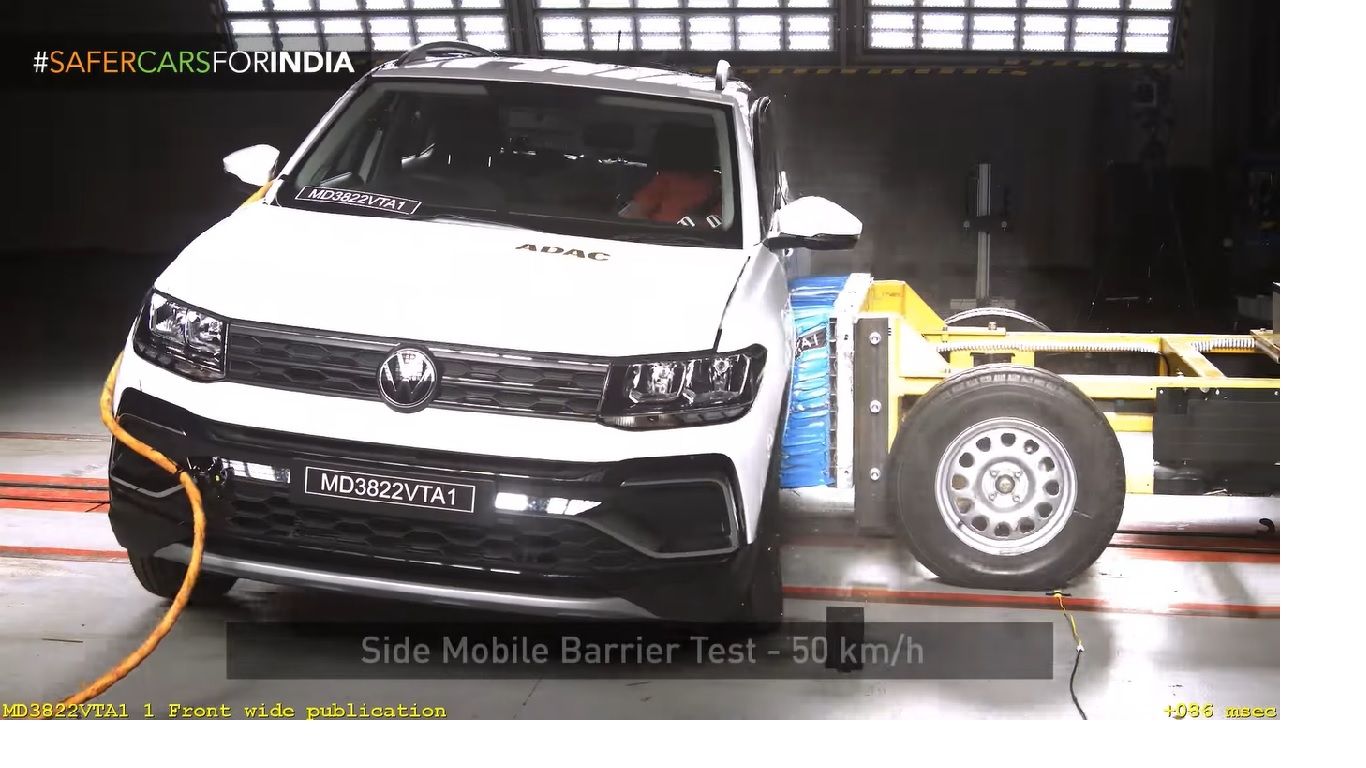 The updated GNCAP protocols require new models to undergo crash tests for frontal and side impacts. Additionally, to get a five-star rating, a vehicle must be equipped with ESC, pedestrian protection, and side impact pole protection. Not to mention, a vehicle must show stable body structure during the tests, which means that the shell shouldn’t deform during the head-on frontal impact. Since both the Kushaq and Taigun were awarded top ratings, it’s fair to say that these siblings meet all the set parameters.

According to GNCAP’s report, the Kushaq and Taigun scored 29.64 out of 34 points in the adult occupant protection test and 42 out of 49 points in the child occupant protection test. For frontal and side-impact crash tests, GNCAP used the base version of both cars (with dual airbags) and they scored 14.1 and 14.5 points out of a maximum of 17, respectively. For the side pole impact test, top-end variants with six airbags (curtain airbags) were used, and while there were no scores given as such, GNCAP rated the SUVs ‘OK’ in this test.

Commenting on this achievement, Piyush Arora, Managing Director and CEO of Skoda Auto Volkswagen India said, 'The Volkswagen Group has always focused on providing the highest level of safety across its model range. Safety has always been central to our R&D process. The Made-in-India, Made-for-India MQB-A0-IN platform is no exception. It has been internally tested for various impacts and is developed with a key focus on safety. This is an important milestone and a gratifying accomplishment for us, as both our INDIA 2.0 SUV models have achieved the pinnacle of global safety standards. Since the launch of the Skoda Kushaq and the Volkswagen Taigun, both cars have established a strong market presence and contributed significantly to the success of the brand and the Group in India. I am confident that this recognition will help continue our brand’s’ growth momentum.'

Petr Šolc, Brand Director, Skoda Auto India, shared his views on the development and commented, “At Skoda, safety is not just a feature. It is an essential part of our brand DNA. Today, I am extremely proud to share that the Kushaq has received a 5-star safety rating by Global NCAP for both adult and child occupants, making it the first car made in India to do so. It is a proud moment for all of us at Skoda to have India’s safest family car leading our growth story in India. The Kushaq, along with the Slavia, drives the success of Skoda's INDIA 2.0 project. In a very short time, it has created a space for itself among SUV enthusiasts across the country. The intelligent, Simply Clever solutions and advanced safety features have been appreciated by experts as well as our valuable customers.”

Christian Cahn von Seelen, Executive Director of Sales and Marketing, Skoda Auto Volkswagen India said, 'For the Volkswagen Group, the safety of our customers and their loved ones is paramount. Safety in our cars is not an optional accessory, it forms the core of our DNA. The design, dimensions, and materials used in the cabin may differ among our car models, but one constant is our rigorous pursuit of keeping the driver and occupants safe in our cars. I am proud and humbled that a prestigious organisation like Global NCAP has acknowledged our efforts, awarding the highest safety ratings for the Skoda Kushaq and Volkswagen Taigun, especially the never attained level of child safety.'

Expect the Skoda Slavia and Volkswagen Virtus – mid-size sedans based on the same platform as the Kushaq and Taigun – to be tested at the GNCAP test facility next. And, given the safety ratings for the SUVs, the sedans should have no problem achieving the same results.