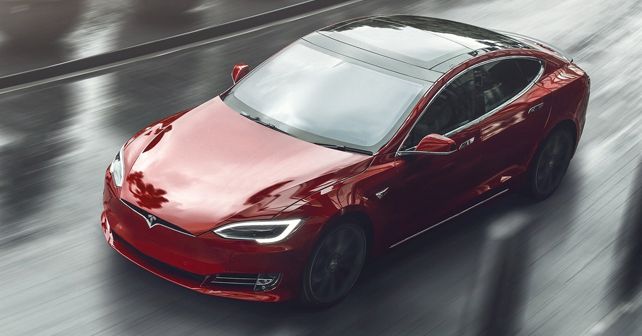 Tesla is currently working on a 3-motor Plaid powertrain that will make the Model S even quicker than the current 'Ludicrous' mode!

Ever since Porsche launched the Taycan, Tesla – or rather their CEO, Elon Musk – has engaged in a war of words with Germany, trying to prove the superiority of Model S over Porsche’s first ever electric car. While it all started with Musk tweeting about taking a Model S to Nürburgring – to beat the Taycan’s lap record of 7:42, obviously, he inadvertently also revealed some incredible updates that are being planned for the Model S. Long story short, Musk has confirmed that Tesla is working on a 3-electric motor ‘Plaid’ powertrain, which will be even faster than the current ‘Ludicrous’ mode!

Now, according to Musk, the new 3-motor setup or Plaid mode is still a year away from production, and it’ll be offered only with the Model S and X, as well as the upcoming Roadster, for which it was originally planned. He also claimed that the Plaid powertrain will make Model S & X more expensive, but they’ll still be cheaper than their competitors – he is, undoubtedly, taking shots at the Taycan that begins at 150,000 dollars in the US.

Musk’s tall claims have also been testified by Tesla, as they claim to have broken the fastest lap record for 4-door vehicles at Laguna Seca racetrack with a Model S. The Model S lapped the circuit in 1:36.555, which is a second faster than the previously held record. In fact, it’s quite a lot faster than Tesla’s own record of 1:43, which was set last year. So, how did they do it? Well, Plaid mode, of course. As per Tesla, the Model S that broke the lap record was a prototype that used the upcoming 3-motor Plaid powertrain. However, it’s also been reported that there were more modifications on the vehicle.

More details will emerge on the Plaid mode in the coming time, but at the moment, all eyes are set on the Tesla Model S that's going to take on the Nürburgring soon. Can its Plaid mode beat the Porsche Taycan’s lap time? Well, we have no clue. All we can suggest is, get your popcorn ready!