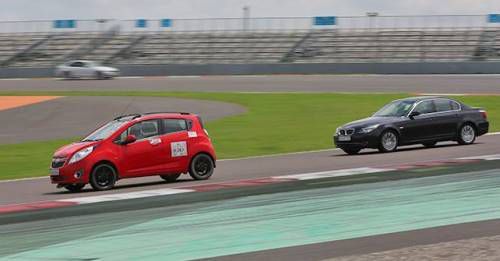 Open track day and Time Trial was held at the BIC after a long hiatus.

July 30th, saw a huge number of speed junkies head down to Greater Noida, for the open track day, held at the BIC. People across the city came down to the 5.1-kilometre race track in their stock vehicles, modified cars, super bikes and super cars to be able to tap the full potential of their machines and hone their skills and ability to drive them fast.

The day was separated into eight – 40 minute – sessions for cars and bikes, divided into different classes and power. Stock or modified cars were given three sessions spaced throughout the day. Superbike owners were allotted two sessions while one session was assigned for bikes which had an engine displacement of lower than 400cc. People who didn’t want to drive could also experience TAXI rides, or anyone who wished to drive a full blown race car could book themselves a Volkswagen Polo Race car as well. The final session of the day was allocated to just supercars which were the biggest attraction of the day.

At the track, one can book as many sessions as they like to drive or ride throughout the session. Transponders to measure their lap times, and helmets for drivers were also available at the venue while on-track activities were carried out in a professional and safe manner as Race Control kept a very close eye on every corner of the race track.

Tuners, riders and drivers from across the nation’s capital arrived at the BIC to try and set the best lap times they could achieve with their machines. Undoubtedly, some of the fastest lap times were set by the high-performance cars and the supercars during the final session of the day.

The date for the next BIC Time Trial and open track day is expected to be announced soon.