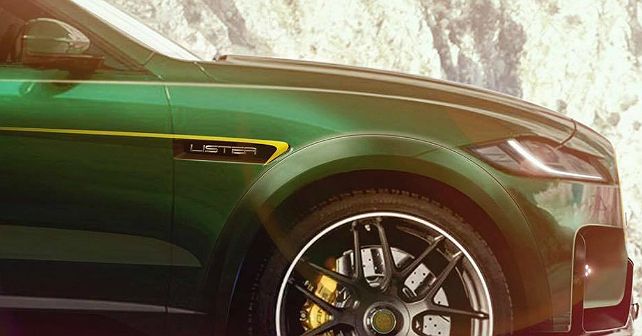 So, should the Lamborghini Urus be worried?

Lister Cars, a UK-based carmaker, has released the teaser of its upcoming world’s fastest SUV – a title that’s currently held by the Lamborghini Urus. This is the very first teaser of the vehicle and more are confirmed to follow before the final reveal.

Now, we’re pretty sure that the vehicle in the teaser looks quite familiar to you, that’s because Lister’s SUV is not a new vehicle

from the ground up but is instead based on the Jaguar F-Pace – the SVR version to be precise.

The stock F-Pace SVR is powered by a supercharged V8 petrol motor that pumps 542 horses and 680Nm of torque. The vehicle can sprint from 0 to 100km/h in 4.3 seconds and has a top speed of 283km/h. While that’s insanely fast, it's still not fast enough to steal the ‘world’s fastest SUV’ title from the Urus, which for comparison, produces 641bhp and 850Nm. So, certain reports point towards the Lister SUV churning out as much as 670bhp!

Recently, Lister Cars also modified a Jag F-Type and christened it as Thunder, which produced 666bhp. Only 99 units of the Thunder were built, all of which found buyers in a jiffy. The F-Pace based SUV is said to have a longer production run than the Thunder sports car.

We’ll keep you updated as more details of the Lister SUV emerge. So, stay tuned . . .